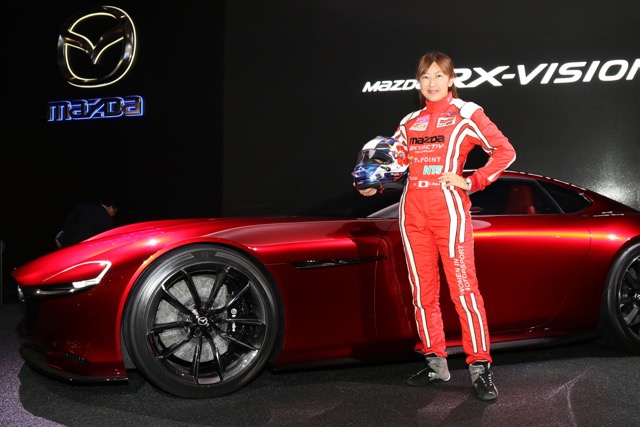 Racing driver, Keiko Ihara is set to compete for the official team of Mazda USA, Mazda Motorsports, in the IMSA WeatherTech SportsCar Championship’s “12 Hours of Sebring,” to be held at Sebring Raceway, Florida on March 19th (Sat). Ihara is one of the most successful women in motorsports, having competed for three years in the World Endurance Championship until 2014 and becoming the series’ first woman to climb to the podium. As a result, she is actively promoting the participation of women in the racing world, having been designated a leading expert member of the FIA’s Women in Motorsport Commission and the chairman of Japan’s JAF Women in Motorsports program. Due to these efforts she had to take a hiatus from competing in 2015, but this year she will compete in her first race in 1 year and 4 months behind the wheel of a prototype race car.

The machine that Ihara will be driving is the 570hp 2-liter, direct injection DOHC turbo “MZ-2.0T” engine mounted prototype car (built in accordance with FIA LMP2 regulations). While both of these prototypes ended the opening round of the series in a retirement, one of them was running as the leader for ten laps of the race, demonstrating the serious potential these cars possess. The car that Ihara will be driving is the #70 that is driven by team regulars, Tom Long (33) and Joel Miller (27). Ihara took part in development testing the new vehicles at Palm Beach, Florida in December of last year where she said, “Although I was nervous about driving a prototype car for the first time in a long while, the new power unit is really powerful and doesn’t present any turbo lag. It’s an amazing engine. I’m really looking forward to driving with my talented teammates who have been brought up through Mazda USA’s ladder system.” She went on to reflect, “Last time I was the only Japanese driver to compete in the opening round of the World Endurance Championship at Sebring in 2012. Driving an LMP2 car, I managed to run in practice and qualifying but machine trouble left me unable to participate in the final race. I’m going to put everything I have into competing alongside everyone in team Mazda USA. We will be aiming for a race victory so please cheer us on!”

Mazda USA Motorsports Director, John Doonan stated, “We warmly welcome Keiko into the Mazda prototype driver line up for Sebring. Sebring is a harsh race. Her experience at Sebring and the 24 Hours of Le Mans will be a great asset to the team. This year Mazda Motorsports will definitely be able to compete for the top spot at Sebring. Mazda has taken 13 class victories here in the past and we are determined to grab its first overall win.”

It should also be noted that the 2016 “Women in Motorsports” project, led by Ms. Ihara, will be recruiting 10 women in early March to engage in full-scale motorsports activities.