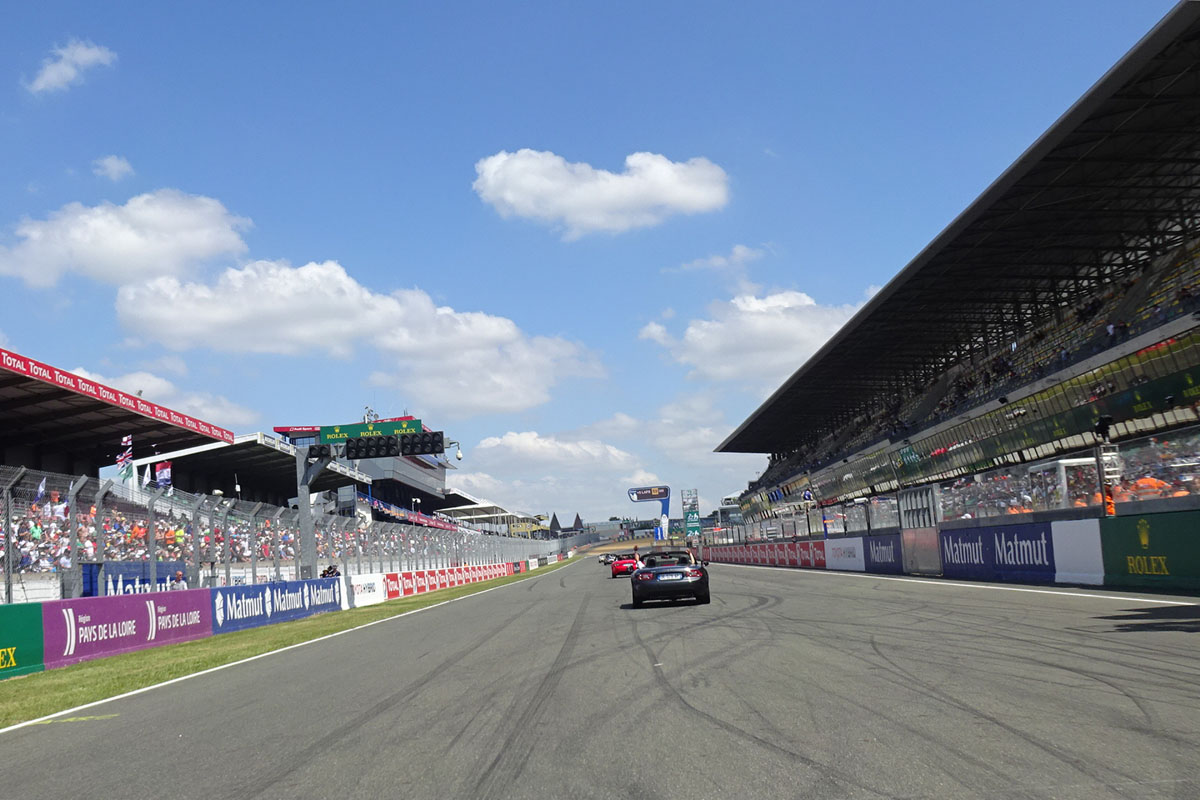 On June 14th (Sat), just before the start of the 24-hour race, 10 Mazda MX-5s completed a full parade lap of the Circuit de la Sarthe.

The MX-5s making the full course run of the 13.6km Circuit de la Sarthe were none other than the 10 vehicles that were used for the driver’s parade on the previous day. For the MX-5 owners who had gathered from all over France, the excitement of being able to run on this revered racetrack was so overwhelming it almost seemed like they were about to blow. As the Circuit de la Sarthe is a course that is made up of public roads that have been blocked off just for the race, the course is only able to be run once a year and a chance like this is exceedingly rare. Along with these drivers was one of the instigators of the event, Yojiro Terada, as well as Mazda Managing Executive Officer, Masahiro Moro, Mazda USA Motorsports Director, John Doonan with Mazda USA driver, Sylvain Tremblay along with Japan Party Race champion, Teruaki Kato. All of these joined the drivers prior to departure and they seemed even more excited than the watching audience. In the passenger seats, just as on the day before, were the children of the Support Our Kids program. The cavalcade travelled backwards through the entrance to Bugatti circuit, under Dunlop bridge, then from Tertre Rouge down the straight of Les Hunaudières, they passed Mulsanne corner, followed by Indianapolis, Arnage, Maison Blanche, and Porsche curves, then back down through the home stretch. It really was the full course of the 24-hour race that was moments away from beginning.

For the kids as well, this once in a lifetime experience was clearly stirring their hearts. All those who participated in the parade had lunch together after it finished and it was here that the kids gave a presentation. The theme was “What I want to be in the future.” One said they wanted to be a doctor like the one who saved their brother, another that they wanted to be a teacher in Africa to help others the way people had helped them following the earthquake. There was also some that said they wanted to be a car manufacturer engineer or even just “a winner.” As each of the children described their dreams, tears could be seen forming in the eyes of all the adults listening. The children had already grown so much through the 10 days of the tour. The second Support Our Kids in Le Mans is heading towards its final stages. Imagine what the participants of this year’s Support Our Kids will have gained and what they will bring back with them to Japan.