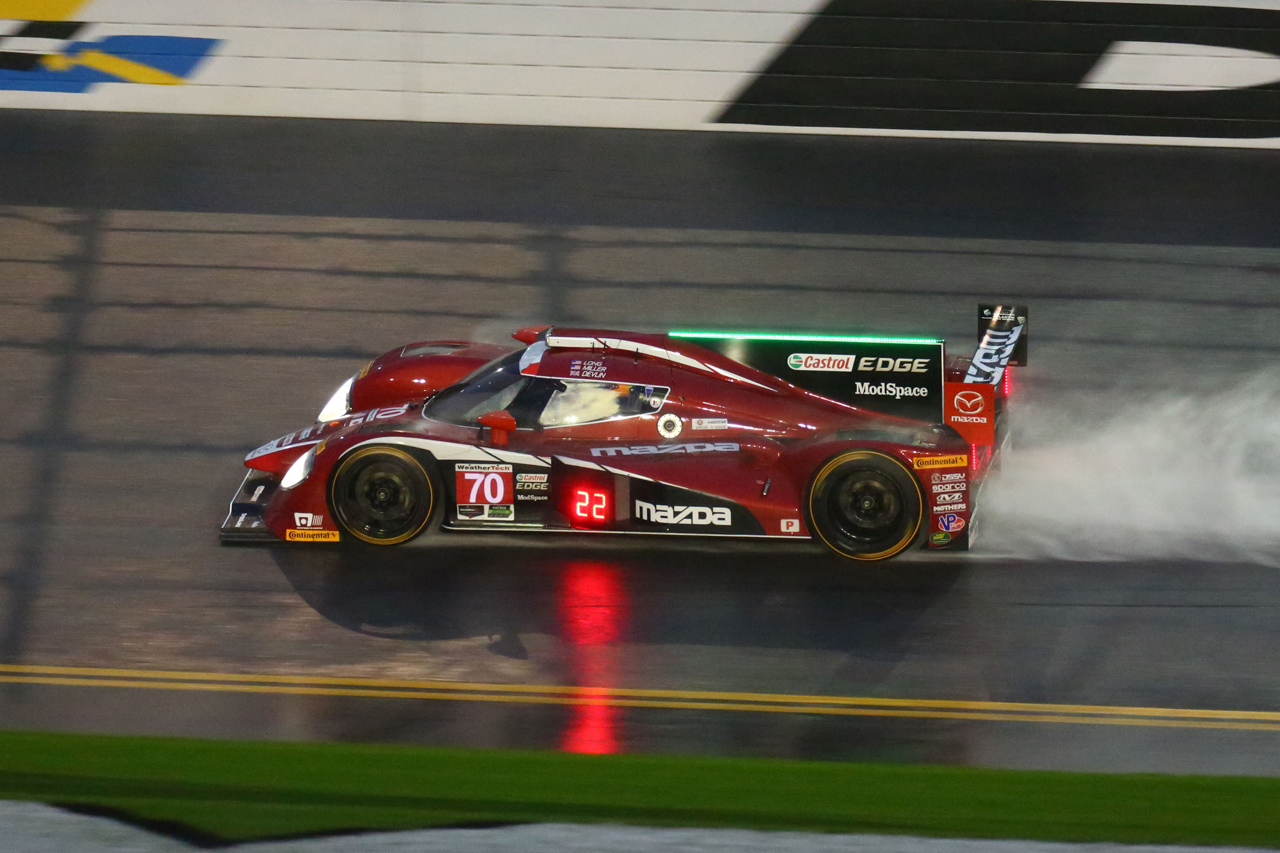 On January 28th (Thur) the practice runs for the 24 at Daytona began and the roar of the 54 competing machines reverberated around the circuit. However, from the morning the weather had been exceedingly unstable and, when qualifying began at 5:00pm, the rain became a deluge and how the prototype session would unfold became extremely unpredictable.

With the weekend of the 24-hour race forecast to have clear weather, and every team loathing the dangers that rain brings, most finished up their free practice session as soon as the minimum required setting confirmations were completed. In the same vein, Mazda Motorsports’ #55 Tristan Nunez and #70 Tom Long, who were to take the reins for qualifying, carried out a restrained session after checking their machine setup. Since the rain wasn’t showing any signs of worsening the team cancelled their afternoon session. The decision was made to avoid the risk and focus on qualifying. However, when the time came for the qualifying sessions to begin at 5:15pm, the rain suddenly became a severe downpour meaning visibility would be difficult to secure due to the massive sprays emitted from preceding vehicles. Despite this, the green light was flashed from the flag tower and so the two Mazda prototypes headed out onto the track. In the end, the session ended without either of them having the opportunity to go all out on their time attack. The final qualifying results saw the #70 grab 10th and the #55 12th on the grid. On top of this, amazingly, the overall top times were monopolized by GTLM class machines, whose session was held while the rain was still relatively light. However, the rules stipulate that the front row be occupied by the prototype group, so the starting grid will still take the form of a regular race.

#55 Nunez’s stated, “I’ve never experienced rain like that. It was like driving in a swimming pool. It felt like I needed a rudder rather than a steering wheel. It took everything I had to keep her on the course, pushing it any harder was out of the question. I’m just glad I could bring the car back to the garage in one piece.” Mazda USA Motorsports Director, John Doonan continued, “Qualifying turned into quite the upset. It’s disappointing because if it had been dry we definitely had a chance at a higher position. Still, we were driving really well with a dry set up at the tests so I think we’re more than ready for the final race. Although we’re starting from the rear, it’s a very long race so I don’t think we need to worry about that too much.”

The weather on the day before the race was clear from morning till night, just as forecast, so completely dry track conditions are expected. On this day, the prototype cars were only allocated one hour of practice runs in the morning. The two Mazda Motorsports Prototypes went out both sporting slick tires. All 3 drivers of each car had a chance to take the wheel, while the pit crew practiced tire changes, nose changes and so on. During this session, the #55 recorded the 4th fastest time, while the #70 marked the 9th, but unfortunately this will have no effect on their starting position in the final race. However, they were able to confirm that there are no issues with their current settings and the team was confident and full of positivity heading towards race day.

On the morning of the 30th an autograph session will be held for each team’s drivers, then all drivers and teams will be introduced to the crowd, after which the race will kick off at 2:40pm.