RE Fans Feel the Excitement at Nostalgic 2 Days 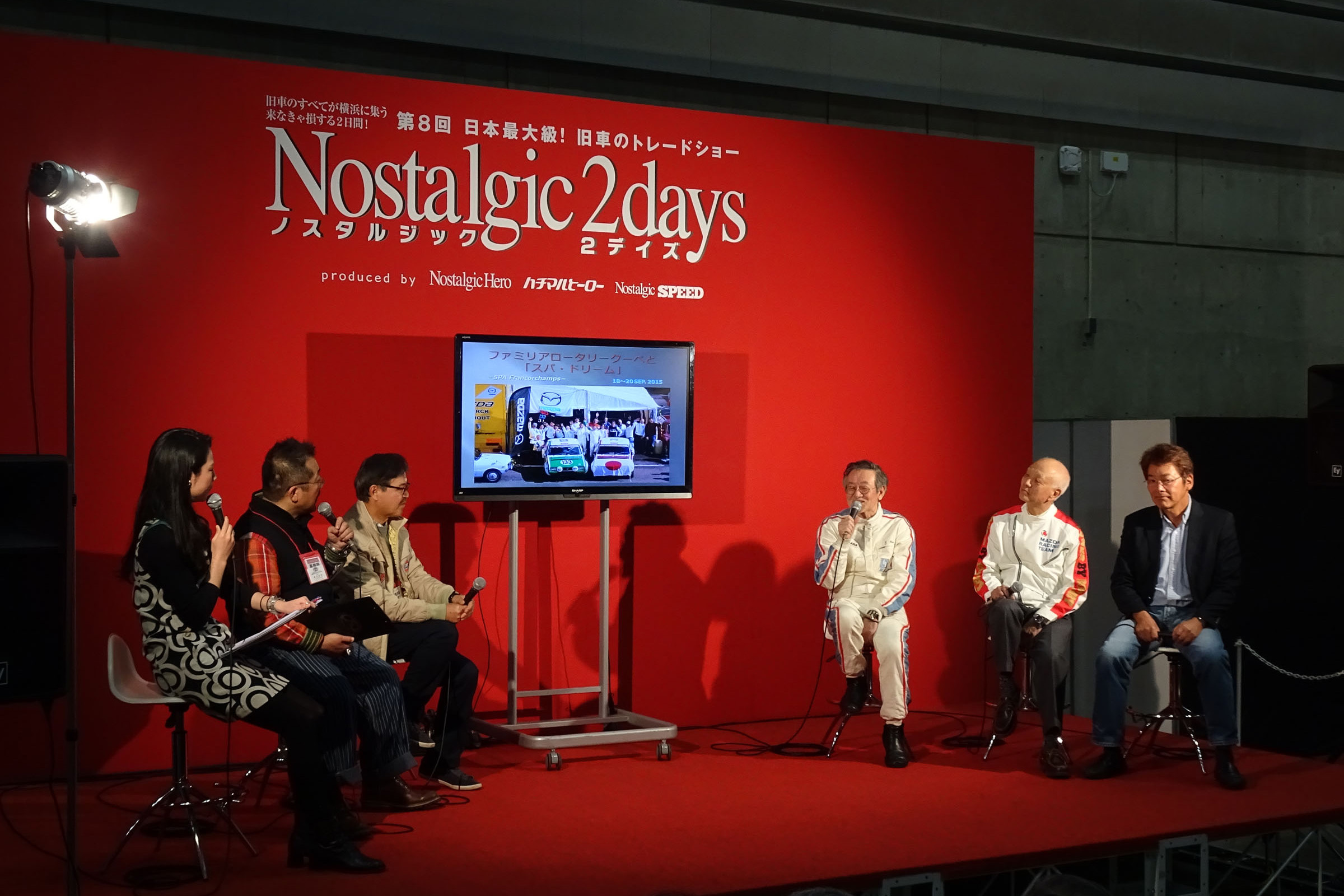 This year the Nostalgic 2 Days headed into its 8th installment and was held over February 20th to 21st at Pacifico Yokohama. With the appeal of this event expanding with every passing year and the contents continuously being catered to the hearts of nostalgic car fans, the number of visitors has been noticeably increasing. One of the significant features this year were the total of three talk shows held on the first day that saw numerous Mazda legends undertake avid and fascinating discussions with the MC that had the fanatical rotary fans on the edge of their seats. Amongst those on stage was Ryuji Kobayakawa, who was a chief of development for the rotary engine and successive RX-7s at Mazda, one of their motorsports directors and is currently a motorsports journalist. Joining him was Takashi Yorino, who competed in numerous races behind the wheel of RE machines and left a great track record. He was joined by Jin Kato, who last year achieved his 45 year dream of competing in the Spa Masters driving his Familia Rotary Coupe, along with Mazda in house volunteers who have formed the Cosmo Sport Restoration Project.

Although in previous years the number of exhibited Mazda vehicles have been quite few in number, this year the number of Mazda machines brought out has increased and the event’s main visual was the Mazda Cosmo Sport. In addition to this, fans were treated to a number of beautifully restored vehicles such as the 13A rotary engine equipped first generation FF Luce, the restored race-spec RX-2 Capella Rotary, the first generation Roadster, the R100 Coupe and so on. Having participated in every Nostalgic 2 days since its inaugural holding, Mr Hoshino, from Garage Star Field, which specializes in the restoration of Mazda vehicles, stated, “Up until now we were pretty much the only ones putting Mazda vehicles on display here so I’m ecstatic that the number of Mazda cars has increased. This has given my crew a lot of motivation. I think this has given the regular turnout a reason to take another look at Mazda cars.”

While many of the spectators that turned out enjoyed the the 1980s idol talk show, held on the main stage, and live performances from Crazy Ken Band’s Ken Yokoyama, who is renowned as a car fanatic, they also feasted their eyes on the nostalgic cars that have been painstakingly restored by various workshops around Japan. On top of this, owners of rare exhibition cars exchanged information, fans visited the numerous shops selling classic car hobby goods, model cars, clothes and tools and so on. Amongst the clamor, numerous fans managed to discover long coveted items, with individual exhibitors in the swap meet area allowing fans to search out bargain treasures. The decorated truck showpiece, “Showa-Poi” also garnered a great deal of attention. Talking to a smiling fan who came out from Sendai, he told us, “We look forward to this event every year. I took the day off work to be able to come here. This time there were numerous Mazda cars on display, which meant it was really fascinating for me, because I work with a company related to Mazda. The most important thing I took away from this was the chance to walk around and see all the classic cars that I’ve have seen in my car magazine collection. I was able to search out all the cars that I wanted to see.”

The MZRacing booth was also set up at the event, where we were displaying panels and tapestries of successive generations of Mazda machines, along Mikio Nakajima’s highly regarded watercolors. Along with this, we were selling RE goods and limited model cars, and were not outdone by any other store at the show.