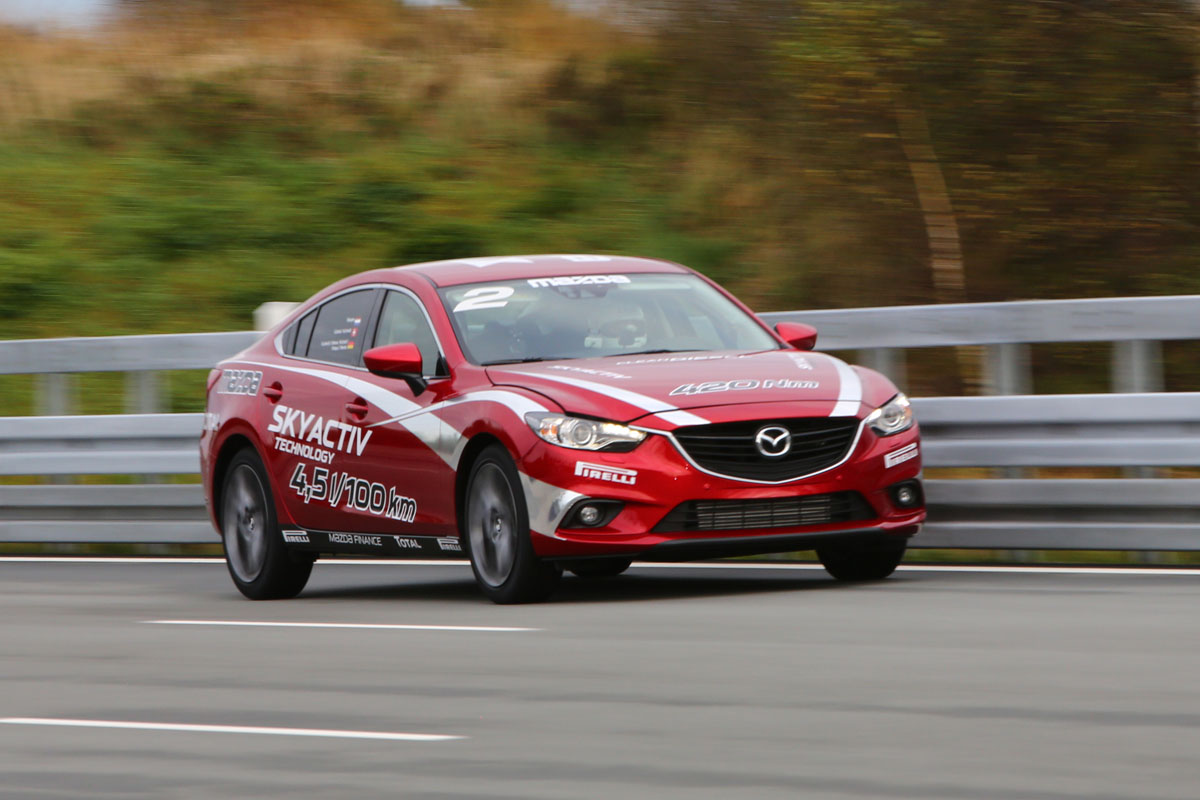 Over October 18th-19th three Mazda 6 SKYACTIV-D 2.2L production cars attempted a 24-hour maximum speed challenge at the ATP test oval in Papenburg, Northern Germany. Every machine completed the test without a hitch and the leading vehicle greatly surpassed the, until then, fastest record for mass produced 2.0-2.5 liter diesel turbo cars (209.824km/h), marking a speed of 221.072km/h (subject to FIA homologation). The other two vehicles were also only just behind.

This speed challenge was organized by Mazda Germany and was performed under the supervision of FIA (Fédération Internationale de l’Automobile) inspectors. Made for the German market, the Mazda 6 (known as “Atenza” in Japan) 2.2 liter turbo diesel, built in May at Mazda’s Hofu factory, had its ECU sealed within the engine bay and even after being shipped to Germany it undertook this speed challenge under stringent administration. Apart from the roll cage and bucket seats installed to ensure the safety of the drivers, these vehicles were completely normal, mass production road cars. After recruiting via the internet, normal drivers were chosen from a selection process carried out at the Hockenheimring at the end of August. Along with them Mazda dealer officials (managers, mechanics, etc.), their customers, partner car media representatives and racing drivers also took part to bring the number of drivers to a total of 23. Each of these drivers were allotted two sessions of 1.5 hours and the 24 hour speed challenge was carried out.

Aiming to minimize the amount of air resistance experienced during the speed challenge at this 12.3km ATP high-speed oval track, each car started off in 10-minute intervals so as to avoid entering each other’s slipstream. Having been blessed with relatively warm weather of between 17°-20°C, the drivers took turns to push the 3 machines to their fastest speeds under mostly dry conditions. Towards the end there was a period where the wind picked up and was accompanied by a brief shower, which made things a little cool. However, the road surface didn’t get overly wet and before long the venue returned to its original conditions and, after 24 hours of driving, they headed towards the checkered flag. In the end the 3 machines recorded average maximum speeds that exceeded the current record, set in 2004, by more than 10km/h. All three cars carried out 434 laps of the course over 24 hours, with each traveling a total distance of 5,338km. If certification is handed down by the FIA it will officially be listed as a new record.

This record demonstrates the Mazda 6 SKYACTIV-D 2.2 Liter’s superior fuel efficiency, power, durability, reliability and ability to lessen the burden experienced by drivers even during long stints. Not only this, it also clearly proves that Mazda’s car making philosophy is one that provides “the joy of driving with superior ecology and safety.” A philosophy that goes hand in hand with the pioneering spirit Mazda showed with it’s many years of continued participation at the 24-Hours of Le Mans.