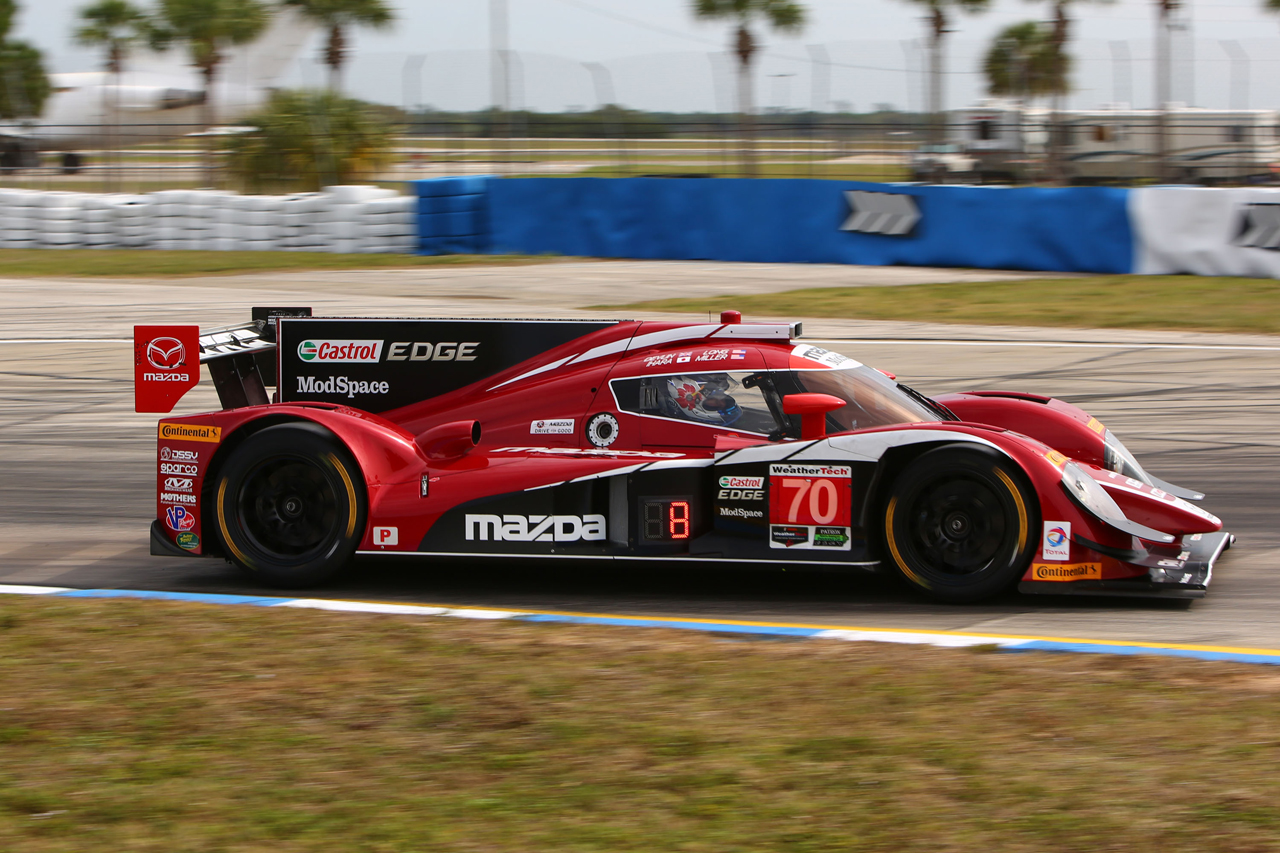 The official qualifying sessions for the 12 Hours of Sebring were held on March 18th (Fri) where the #55 Mazda Motorsports prototype (Nunez, Bomarito, Pigot) qualified 5th and the #70 Mazda prototype (Long, Miller, Ihara) secured 7th place on the grid.

The day was blessed with fine weather right from early morning, but the sunshine was not as intense as the previous day and the race schedule began under fairly pleasant conditions. Although the temperature reached 29°C the light breeze made it feel much cooler. In the fourth, 60-minute practice session that began from 10:15am, Devlin first drove the #70, followed by Long, and Ihara, who took the wheel of the prototype for approximately 30 minutes. However, during this session the red flag was raised as many as three times, and the team chose to pit with each cessation, which meant that in the end she was really only able to carry out a handful of laps. Despite this Ihara remained positive and stated, “I wasn’t able to drive as many continuous laps that I would have liked. However, my times were consistently improving so I’ve regained a lot of confidence.” At this point the #55 was 0.9 seconds within the pace of the Corvette DP and in 5th and the #70 was sitting in 9th.

In order for the race to be able to start from 10:40am on Saturday morning, support races and other events are scheduled to be completed on Friday. These include the “Mazda Lights”, a one-make prototype series whose competitors utilize the Mazda MZR 2.0-liter engine, the semi-endurance mixed mass production car series, the Continental Tire Challenge, and the Porsche GT3 Cup. Within these, the unique Mazda lights race sees 21 entries consisting of talented 16-17-year-old up-and-comers who engage in fierce competition alongside older veterans who race in the “master class”. The first race held on the previous day saw a 19-year old driver take victory, while victory in the second round held on the morning of the 17th went to a talented 17-year old. The master class takes up about half the grid, with ten entries. Having taken the title in this series last year, 21-year old Kenton Koch has moved up to the IMSA WeatherTech series’ PC category and took class victory at the opening round, the 24 Hours of Daytona. It is clear that there is a great deal of support for participatory motorsports in the US.

Official qualifying began from 4:45pm and was held for a total of 15 minutes. An exclusive prototype class session was held for the 12 competitors and this left traffic relatively clear and greatly reduced the possibility of the red flag being raised during the driver’s time attacks. Under FIA regulations there is no requirement for all drivers to take the wheel in qualification and thus each team’s selected representative driver’s recorded time becomes the official qualifying result. The youngest driver in the squad, Tristan Nunez (20 y/o) took the wheel for the #55, while veteran Tom Long (33 y/o) was in charge of the #70. These two take on responsibility for the setup of the machines and all adjustments to the cars’ suspension, brake balance, aerodynamics and so on are based on how they feel the vehicle’s are performing. The other drivers then align themselves with the decided setup. At the end of the session the #55 marked the 5th fastest time. This is the highest qualifying result so far for the Mazda Motorsports team in this category.

Comment from #55 driver, Tristan Nunez
“The car was great out there! Going to make some minor adjustments to the setup for the race but all in all a fantastic car for the race. Everyone is really excited for tomorrow! Huge shoutout to the guys for busting their tails and staying late every night. Really inspiring to see their dedication!”