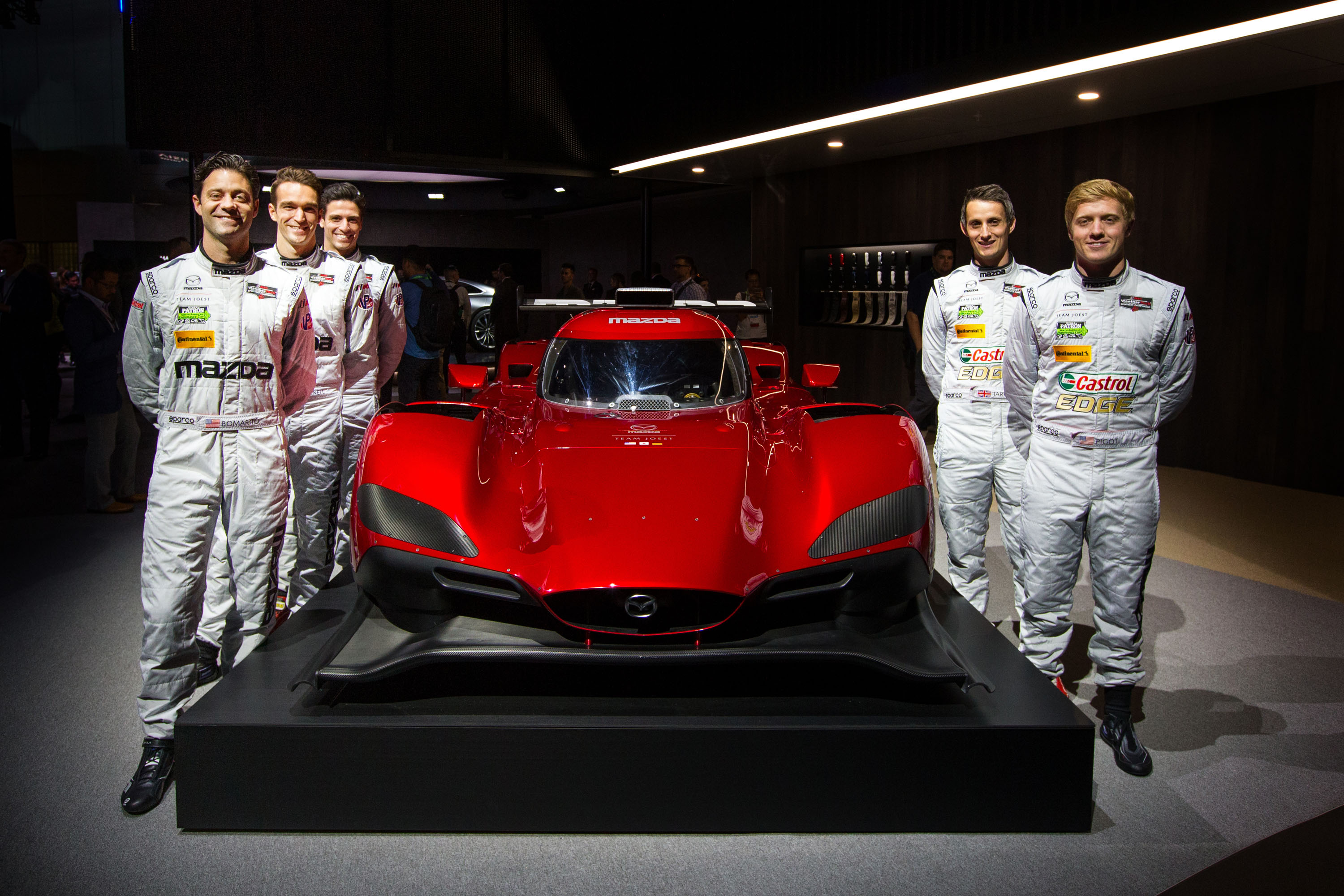 IRVINE, Calif. (November 28, 2017) – Mazda Motorsports has announced the team of drivers that will pilot the two Mazda RT24-P race cars in the 2018 IMSA WeatherTech SportsCar Championship with Mazda Team Joest. Racing under the Daytona Prototype international (DPi) rules package, this is the first season for the combination of Mazda and Joest Racing, joining the third-winningest manufacturer in IMSA racing history with the team that has won 15 times at Le Mans.

Competing for the championship in the 10-race season will be long-time Mazda drivers Jonathan Bomarito and Tristan Nuñez, both Americans, who will be joined by British racers Oliver Jarvis and Harry Tincknell, who both join Mazda for the first time. For the four longest endurance races, the quartet of drivers will be supplemented by IndyCar racer Spencer Pigot and 2017 Deutsche Tourenwagen Masters (DTM) touring car champion René Rast. The driver combinations for each car have not been set, as the team continues a busy testing schedule ahead of the season-opening Rolex 24 at Daytona in late January.

“Mazda has had a driver development program since 2007,” explained John Doonan, director of Mazda Motorsports in North America. “So, it’s a big part of our Mazda Prototype program to feature drivers that have come up through the Mazda ranks, whether that’s in sports cars like Tristan Nuñez, or the open-wheel side of things with Bomarito and Pigot. We’re thrilled that those superb young men are back with us again in 2018.

“Working with Joest, we were also able to secure fast, winning drivers from their recent history, which makes Jarvis and Rast a good fit, as is Tincknell, who has been successful in both GT and Prototype cars,” said Doonan. “We ask a lot of our drivers outside the car as well, so it’s great to add drivers who will fit the chemistry of what we hope to achieve as a team.”

Bomarito won the 2010 Rolex 24 at Daytona in the GT category, driving a Mazda RX-8. Bomarito, who grew up in Monterey, Calif., won the 2003 USF2000 open-wheel championship, was a race winner in the Mazda-powered Atlantic Series, and nearly won the 2014 IMSA GTLM drivers championship before his stint in the Mazda Prototype began in 2015.

“Whether you’re a young driver or an accomplished driver, the dream is to align yourself with a manufacturer,” said Bomarito. “So, I can check that box with Mazda. Second, it’s best to be with a good manufacturer, and I check that box with Mazda. Look at their involvement in motorsports history. It’s a really hard industry to find stability, so I’m glad to be with one of the heavy hitters in IMSA. And now, to be aligned with a team like Joest and their history with the sport, it’s great. Their experience, their professionalism and attention to detail is already showing. It’s huge for any driver to be with Mazda Team Joest and I’m proud to be one of them. I’m looking forward to 2018. I think we’re going to have some big improvement and it’s a very exciting time.”

Jarvis joins Mazda after winning the LMP2 category (and nearly winning overall) at the 24 Hours of Le Mans with Jackie Chan DC Racing in 2017. He finished tied for second in the season-long LMP2 class of the FIA World Endurance Championships (WEC), and has extensive experience with Joest, including an overall victory at the 2013 12 Hours of Sebring and multiple podiums at Le Mans. Jarvis has a GT class win at the 2013 Rolex 24 at Daytona with Alex Job Racing.

“I am absolutely delighted to be joining Mazda at such an exciting time,” Jarvis said. “I have followed the project closely since the launch of the stunning RT24-P and I am convinced that the project will be successful. It was an easy decision when the opportunity arose to be part of it. Having raced in and won both the Daytona 24 Hours and Sebring 12 Hours, the IMSA championship is one I know very well. It has always been a goal of mine to race in the championship full-time and I don’t think there’s ever been a better time to be part of it as the championship continues to grow.”

Nuñez holds the record as the youngest champion in a professional class of road racing in North America. He won the IMSA Prototype Challenge presented by Mazda (nee Prototype Lites) series in 2012 with 11 wins at age 17. He became a Mazda-backed driver after winning the prestigious open-wheel Walter Hayes Trophy event at Silverstone, England in 2011. Nuñez does presentations across the country on behalf of his “Dnt txt n drV Foundation,” which is devoted to educating young people about the dangers of distracted driving.

“It’s a continuous dream come true,” said Nuñez. “Sometimes you think ‘there’s no way that could happen to me,’ but it’s really cool to see where I’m at now. Things just keep getting better and better. I signed on with Mazda when I was 17-years old. Some guys don’t get to be on a factory team at all, so I got really lucky, especially now with the new partnership with Mazda Team Joest. I grew up watching Joest and all the success they had with their previous manufacturer. I’m excited to get going and get to the first race of the year.”

Spencer Pigot will contest the 2018 Verizon IndyCar Championship with Ed Carpenter Racing, and will also be a part of four races with Mazda Team Joest. This will mark Pigot’s third year as an endurance driver for Mazda. He is the first and only driver to win four Mazda driver development scholarships, which included championships in Pro Mazda (2014) and Indy Lights (2015).

“It’s very exciting to be back,” said Pigot. “Mazda Team Joest is really impressive, and it’s been a big improvement already in testing. It’s what you’d expect with a team like this, and it’s really nice. Multimatic and Joest have done a great job with the improvements of the car. It’s all very encouraging and we’ll be able to give it a good fight at Daytona and the other endurance races.”

The versatile Rast will compete with Mazda at Daytona, Sebring, Watkins Glen and Road Atlanta. As a rookie in the DTM series in 2017, Rast won the prestigious drivers championship. He will defend his title in 2018. Rast has previously driven for Joest Racing and has significant Prototype experience, including a podium finish at the 2017 Rolex 24 at Daytona with Visit Florida Racing.

“I worked with Joest Racing in 2015 and 2016, and I enjoyed every single day with their team,” said Rast. “They are one of the most professional teams I have worked with and the atmosphere is always very relaxed but focused. Obviously its a big honor driving for Mazda and one of the most successful endurance racing teams on this planet. The Rolex 24 Hours of Daytona is always one of my favorite races of the year and I can’t wait to hit the track again. Racing after a long winter break is always great and that’s also what I look forward to the most.”

The young British driver joins Mazda Team Joest after a third-place championship finish in the 2017 FIA World Endurance Championship GTE category driving for Ford Chip Ganassi Team UK. Like several other Mazda Prototype drivers, Tincknell had a sparkling young career in open-wheel categories before joining the sports car ranks. He won the LMP2 class at Le Mans in only his fourth sports car race in 2014, and was the driver’s champion in the LMP2 class of the 2016 European Le Mans Series.

“I am really honored to be able to race for Mazda Team Joest this season in the WeatherTech Championship,” said Tincknell. “The whole Mazda team has put in so much effort and made a lot of progress in every area, and after my first test in the car I can’t wait to see how we get on at Daytona. The Mazda RT24-P DPi has taken huge strides over the winter and I immediately felt comfortable in the car. I know the championship is very competitive and it will be a tough fight, but the spirit of the whole team is so determined and ready for it.”