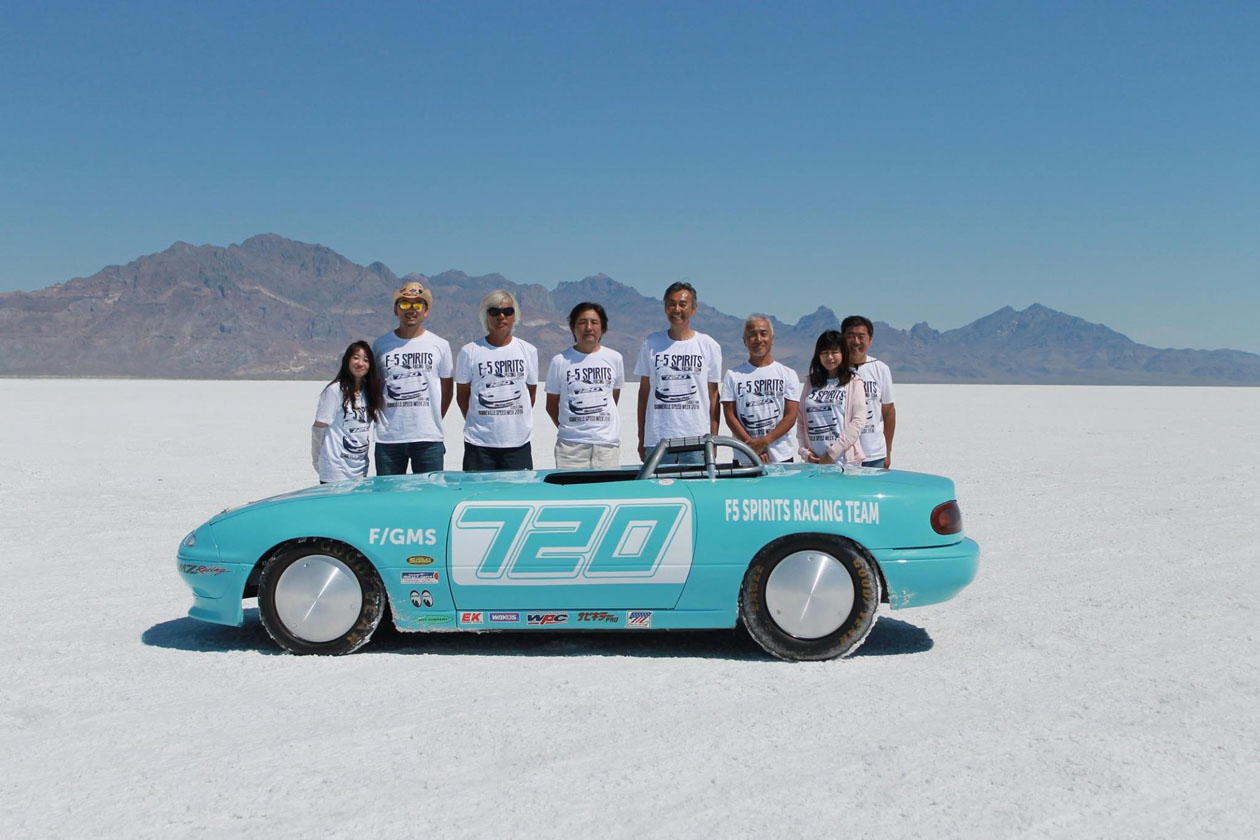 It was in the beginning of spring 2014 when Los Angeles resident, Sam Okamoto attempted to challenge the Bonneville Speedweek in a 13B rotary engine mounted first generation MX-5. However that year and the following year the conditions of the salt flats were effected by unseasonable weather which left the event being cancelled two years in a row. However this year Okamoto, who has been steadily building up his machine, finally got his chance to take on the challenge..

In June we received an update on Bonneville Speedweek from Okamoto stating “For the time being we will be going through vehicle inspection and carrying out a shakedown on the salt flats.” This meant that they would be officially taking part in the event and Okamoto’s “salt fever” began. Crew chief, Irie arrived in Los Angeles from Japan on August 8th. They fired up the engine on the morning of the 9th, carried out alignment adjustments on the morning of the 11th, and then, at 1:00pm on the same day, they made way for Bonneville. The approximately 1000km trip took them around 13 hours and they arrived at the closest town to the salt flat, Wendover, at about 2:00am.

The SCTA official carried out an extremely comprehensive vehicle inspection that took over 2 hours, after which they were informed that there were 13 modifications of various scale that they would be required to carry out. The majority of these were concerning safety, the most important of which was the requirement to weld a 6mm iron plate called a “scatter shield” to the outside of the transmission tunnel to protect the driver’s feet in case the flywheel and clutch came apart. Along with that they were required to change the material of the roll cage pads, add a net, repair a hole in the bulkhead, extend the fuel tank inlet vent, add a throttle spring, amongst a range of other adjustments. Okamoto was on the verge of throwing in the towel but the officials did everything they could to enable him to compete, such as introducing him to teams that had brought welders and guiding him to shops selling safety gear. For this reason Okamoto began to work fervently in order to pass through vehicle inspection.

Taking on the job of welding was a team running a 4-wheeled streamliner mounting a turbocharged Suzuka Hayabusa engine. By the evening of the 14th the welding of the scatter shield was completed. By the 15th all 13 points of contention had been addressed and they awaited a re-inspection with high hopes of running on the following day. Although Speedweek would continue until the 19th, Okamoto’s team only intended to stay until the 16th so this was their final chance. The official came over to their tent in the morning to carry out a final inspection and review an escape demonstration from the driver and, after passing both, they were cleared to compete. In the end, getting through vehicle inspection cost them four days. They first headed out to the 2-mile “rookie course.” The rookie run requires the cars to drive at over 100mph but under 150mph. Looking nervous at the start, after running for about 100m the engine stalled. The team took the car back to the pits to determine the problem and began repairs on the electrical system. This again ate up a lot of their time and when they headed back out towards the rookie course the sun was moving into the west. However both Okamoto and Joji Nakakawa, who shared driving duties, both completed two runs achieving 133mph and 140mph respectively. With this they graduated from the rookie course.

They then headed over to the 3-mile (2-mile recorded) short course but with 7pm (the official time for ending all runs) approaching, Okamoto headed into his first run but couldn’t complete it before time ran out. However when he received his recorded time sheet he saw that by the 2-mile mark he had achieved 151.289mph (242km/h). Not only the team but everyone present was blown away by this. Despite having not adjusted any settings and just gone all out in the real deal, he didn’t feel any disturbing shakes and the steering held fast without veering. This truly displayed the innate potential of the MX-5 Miata and the power of the rotary engine.

Crew chief, Irie stated “I want to send a big thank you out to all those that supported us. For a bit there we had no idea what would happen and were pretty frantic. When we finally managed to get through vehicle inspection and get out onto the salt flats to carry out our straight run I was almost in tears. If we had had more time I think we could have recorded even better speeds but after receiving so much assistance from all those around us I’m pretty happy to have been able to leave behind a 151mph in the books. Thanks to all those that cheered us on.”.

All those who often come out to this event are greeted with, “Oh you made it out again this year!” Then when it finishes, without fail the departing words are, “see you again next year!” This week saw a lot of frantic rushing around but, through that, they increased the number of acquaintances with which to exchange these greetings. Okamoto’s salt fever has not cooled one bit but it is clear it is burning hotter than ever.