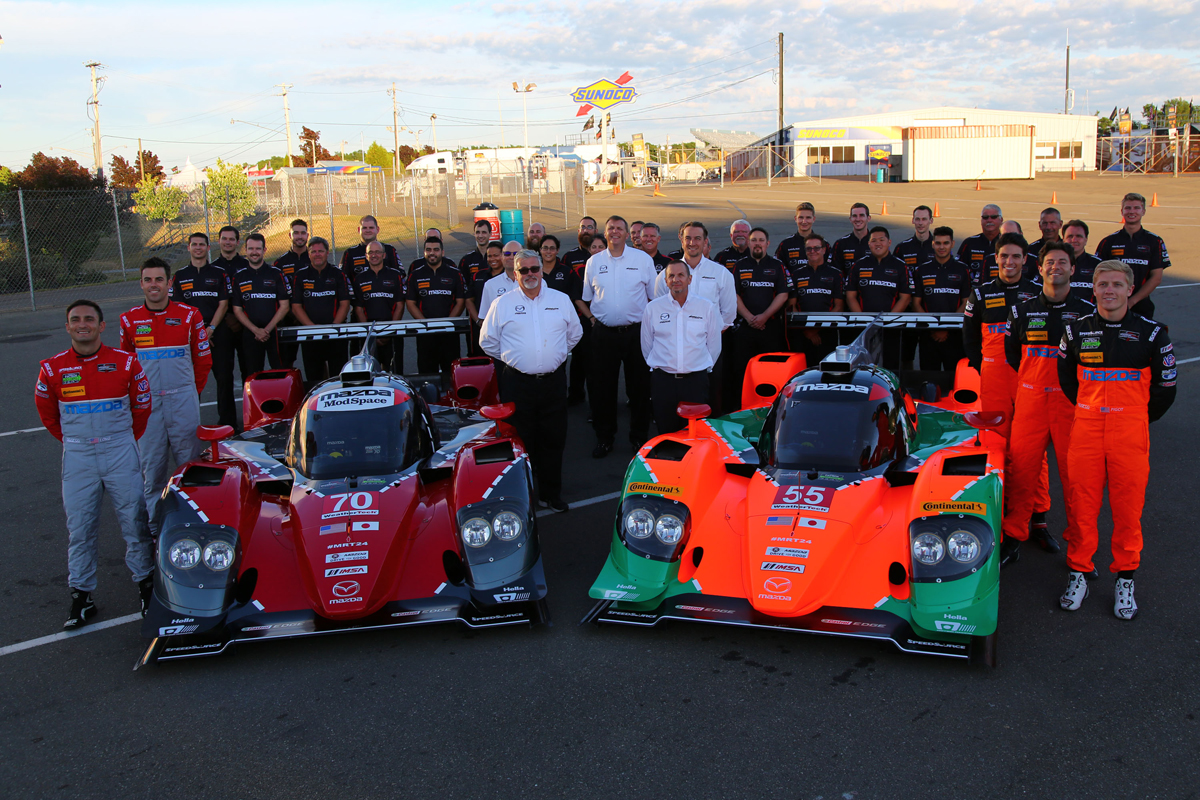 Round 6 of the IMSA WeatherTech SportsCar Championship, the 6 Hours of the Glen (NY) will be held over July 1st to 3rd where the official team of Mazda USA, Mazda Motorsports will be competing with two Mazda prototypes displaying a distinct livery (color scheme).

In order to commemorate the 25th anniversary of Mazda’s overall victory at the 1991 24-Hours of Le Mans in June, the #55 Mazda prototype has been painted in a vivid green and orange that is reminiscent of the machine that performed so amazingly on that day. The #70 has been painted with the same design but with a soul red and silver to create a beautiful contrast between the past of Mazda’s brand and Mazda Motorsports with its present and future.

Mounted with Mazda MZR-2.0T four-cylinder DOHC direct-injection gasoline turbo engines, this year’s Mazda prototypes have been displaying remarkable progress in the season thus far. The two machines secured 1st and 2nd place on the grid for round 4 held at Mazda Raceway Laguna Seca (California), and the team most recently grabbed their first podium finish in round 5 at Belle Isle (Detroit). The two cars also achieved positive results at the series’ official test sessions held at Watkins Glen in the second half of May.

The team’s youngest driver, Tristan Nunez commented, “The new surface [at Watkins Glen] is unbelievable. I’ve never driven a smoother track in my life. It sounds weird, but it’s so smooth you have to relearn the track. You don’t feel any bumps, which was really surprising. It has so much grip the car just hooks up around the corners so well. The Mazda Prototype really likes the track because we can run it really low, which is the secret to the aerodynamics of this car. I’m interested to see how we compare to the competition, but I think we have a good finish in the crosshairs for sure.”

“I may not have been born when [Mazda] won Le Mans, but being an age where technology is key, there are a lot of videos on the internet of that car! I’ve been watching the 787B for years – even before I got picked up by Mazda. It’s one of those cars that really captures your eye – and the sound that rotary motor made! It’s going to be an honor to run that paint scheme.”

As the 6 Hours of the Glen is a semi endurance race, the two Mazda prototypes have both registered a third driver. The new livery #55’s regular drivers, Tristan Nunez and Jonathan Bomarito will be joined by Spencer Pigot, who is currently an Indy Car driver as part of Mazda’s ladder system. As for the #70, regulars, Joel Miller and Tom Long will team up with British driver, Ben Devlin. The six drivers will be heading into the 6-hour race decked out in racing suits especially tailored for this occasion. The design is based on the racing suits worn by the Mazda drivers who competed in the 1991 24 Hours of Le Mans.

The IMSA WeatherTech SportsCar Championship’s 6 Hours of the Glen will have practice on July 1st, official qualifying on the 2nd and the race will kick off at 10:10am (EDT) on the 3rd.