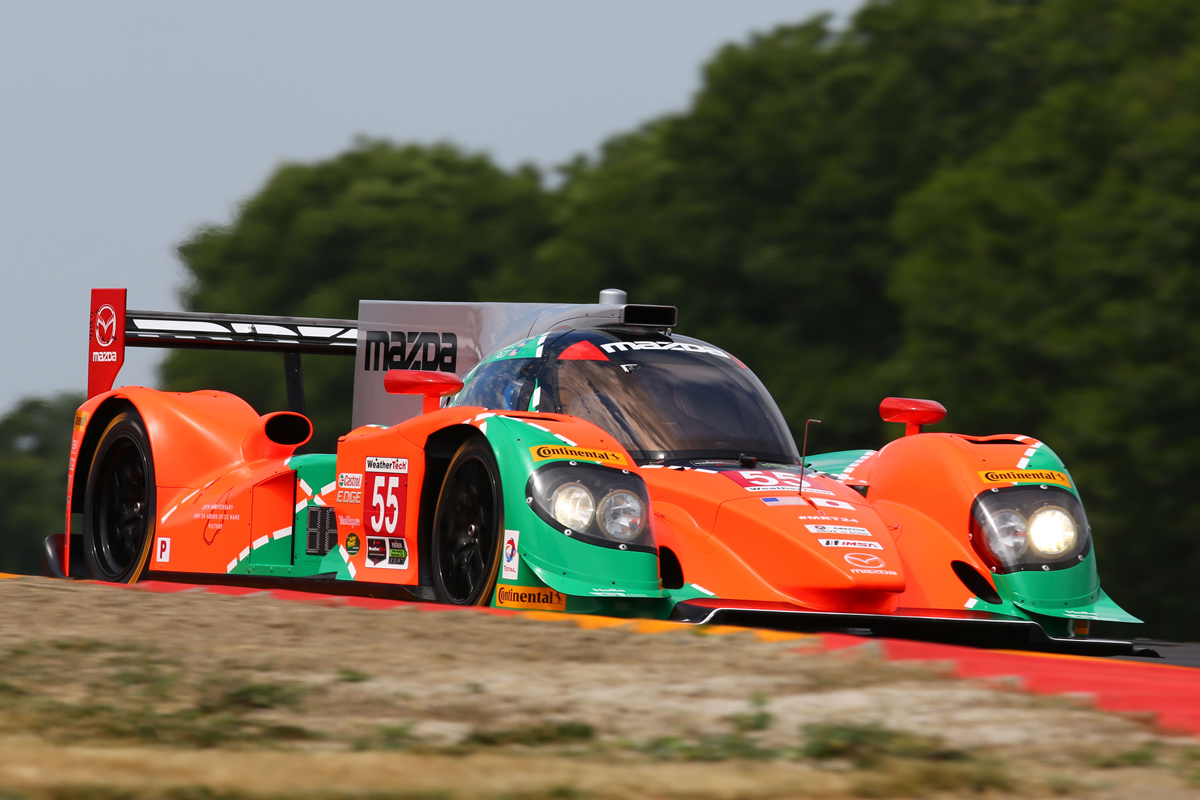 Qualifying for round 6 of the IMSA WeatherTech SportsCar Championship was held at Watkins Glen International on July 2nd where Tristan Nunez propelled the #55 Mazda Prototype to an overall 2nd place starting grid. Tom Long was not far behind grabbing a 5th place qualification in the #70.

A total of 3 hours of practice runs were held from Thursday, with two 1-hour sessions on Thursday and one further session on Friday. The Mazda machines steadily ticked off laps in each session, with spot third drivers, Spencer Pigot and Ben Devlin taking the wheel for the majority of the first day in order to get them fully accustomed to their respective cars. Decked out in vivid orange and green, the #55 was displaying particularly solid performance. Despite it being Pigot’s first time at this track, it wasn’t long before he recorded a 2nd fastest time that surprised the whole crew. He went on to again mark the 2nd fastest time in the next session while, after that, Bomarito burst out and recorded the top time. However, right at the end of the session the top spot was relinquished to the Ligier Honda. In the 15-minute official qualifying session, the #55, with Nunez behind the wheel, secured 2nd place on the grid with only a 0.1 second difference with pole sitter, the #2 Ligier Honda. As for the #70, although it had been struggling to lift its pace during the practice sessions and had been sitting at 9th fastest, Tom Long pulled out a valiant effort in qualifying to secure 5th on the grid, only 1 second off the top time.

Tristan Nunez commented, “This qualifying really gave me a lot of confidence. The car performs amazingly, it is very competitive in qualifying and not just fast in the races but a real pleasure to drive. I’m ecstatic to be able to see the starting flag from the front row behind the wheel of our machine that is decked out in livery that commemorates the 25th anniversary of Mazda’s victory at Le Mans. I really can’t wait for the 6-hour race to begin. I want to send out a massive thank you to our team who have built up this awesome machine and everyone at Mazda USA for their continuous support.” #70 warrior, Tom Long followed, “It was an excellent day for Mazda Motorsports. The car felt really great today and I’m sure it will be more than competitive tomorrow. I’m really looking forward to seeing what it is capable of.”