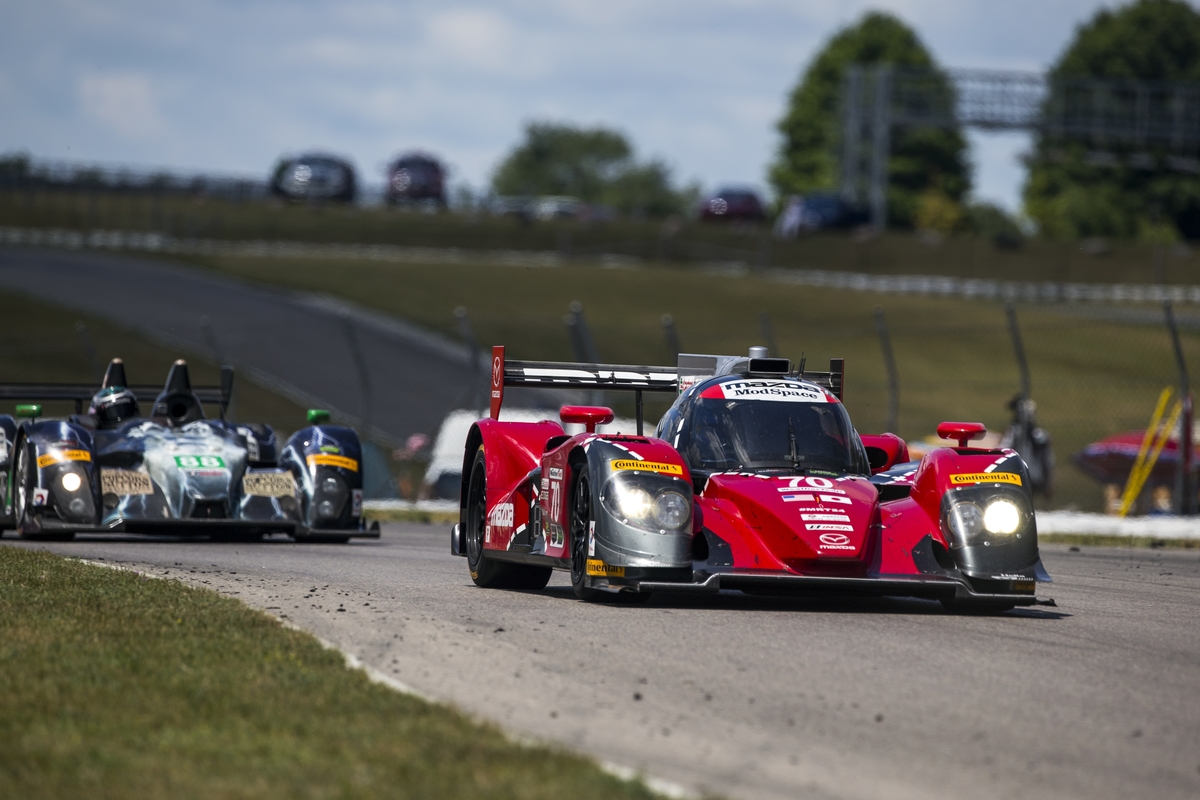 Round 7 of the IMSA WeatherTech SportsCar Championship was held on July 10th at Canadian Tire Motorsports Park (CTMSP) where the #70 Mazda prototype (Tom Long / Joel Miller) started the race from 3rd on the grid and ultimately finished in 5th place. With this the Mazda prototype has achieved top 5 finishes in 5 consecutive races. The #55 (Tristan Nunez / Jonathan Bomarito) that recorded the top time in the previous days qualifying session, competed in this round still sporting livery that commemorates the 25th anniversary of Mazda’s Le Mans victory. Unfortunately, they experienced mechanical trouble mid race and were forced to retire.

Tristan started in pole position in the #55 for the second time this season. He dropped down to 2nd early on in the race but went on to fervently pursue the lead car and cleverly utilized traffic to recapture the top spot in lap 12. After that he gradually increased the gap with rivals to his rear and by the time he pitted at lap 32 he had built up a margin of 16 seconds. However, during the pit stop, the front air jack failed to function properly and thus their tire change took a significant chunk out of their time. The crew were forced to lift the car with their own hands in order to replace the tires and by the time they had changed drivers to Bomarito and sent the machine back out their margin was effectively wiped out. Bomarito went on display a superb effort, managing to record the fastest lap, but unfortunately some trouble arose in the car’s right rear hub at lap 60 and they were forced to retire.

Having led the race for 20 laps, Nunez went on to say, “It was kind of a gaggle on the start, but we were fighting for [the lead]. The car was great, and I was following the 10 car (leader in the opening laps) very closely. Sure enough, as soon as traffic came our way, I got a little grin on my face because I knew I might have an opening. It came to Turn 10, when the 10 car tried to make an aggressive move on a GT car and I was able to set him up and get him into Turn 1. Then we just took off. It was a great opening stint. So fast and so easy. It’s great for Mazda to put the car out there in the lead and for people to see that little orange and green car take off.”

Bomarito followed, “Tristan did a great job and we were leading easily when he came into the pits for a full service. We had the air jack failure, and I came out of the pits and drove hard into Turn 2, the first time you can really lean on it. I knew immediately there was something wrong in the right rear. It felt like something was out of balance. The car just wasn’t handling like it had been all weekend. And then finally we had the issue that put us out of the race… We were very fast, and we were still able to hang with the leaders even with the issue. If we didn’t have that, I think we would have easily gone back to the front and given it to those guys. We had something for the win today. It’s heartbreaking for the crew, drivers and the fans – everybody who puts their heart and soul into this program.”

Tom Long related his experience during the race, “The team gave us a great Castrol Mazda this weekend. We were on a pretty strong pace throughout the weekend with our car… The tough thing today was that the handling was just slightly off. The car wasn’t gripping the road quite as we had hoped – as it had been yesterday… But, it was still a lot of fun driving around this incredible Canadian Tire Motorsport Park with our Mazda [and] to walk away with a top-five is exciting and we’re looking forward to the next race.” Joel Miller continued, “Today’s race was interesting. My entire stint was in fifth place and it was like the lead pack were all just circulating together. Just going around the merry-go-round together. Traffic would cause the accordion effect, where I’d lose or gain time each lap. We had hoped for a yellow to bunch us back up to have a shot, but the caution came only on the final lap of the race.”