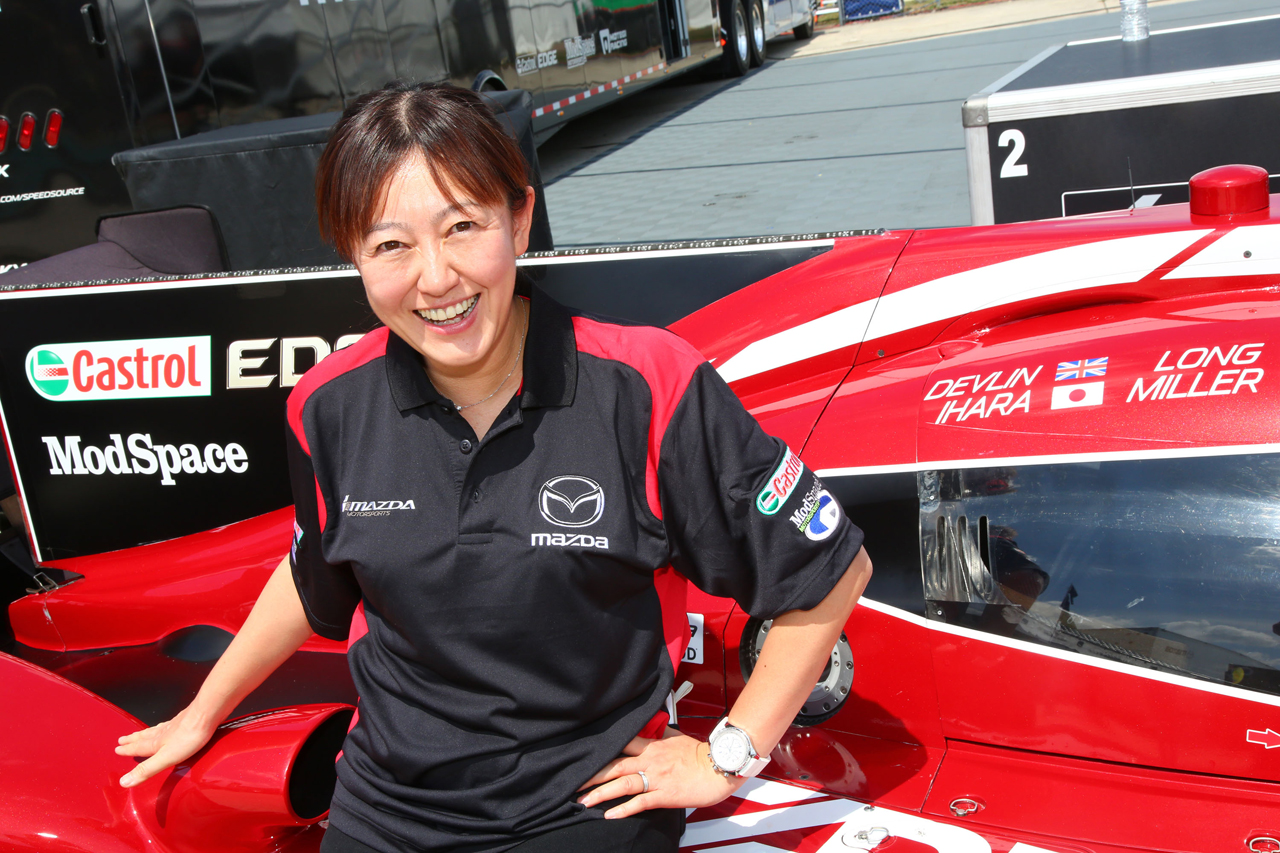 The official schedule of round 2 of the IMSA WeatherTech SportsCar Championship, the 12 Hours of Sebring, kicked off on March 17th (Thur) with three practice sessions that included one night run. Having come over from Japan to participate in this race, Keiko Ihara got behind the wheel of the Mazda prototype for the first time at this track and performed a shakedown run.

Ihara reached the team’s garage in Palm Springs, Florida after carrying out two days of simulated tests in Toronto, Canada. After having a driver seat tailored to her frame for the #70 prototype, she came out to Sebring on Tuesday the 15th. The rest of the team also arrived that afternoon and began setting up their equipment in their garage. Ihara also assisted in the construction of the floor panels and seems to have rapidly blended into the team.

After a support race had been completed at around 5:00pm, Ihara and her teammates went out to perform a track walk. The 6.02km course utilizes fallow land of a local airfield and the race surface has not been altered from the original runway. With joins littered around the course, even the high speed corners are scattered with swells and bumps. As they walked, veteran drivers such as Tom Long and Ben Devlin took turns in giving Ihara advice on aspects such as the race line, parts of the course to be cautious of, and so on. This type of real world information can’t be ascertained through a simulator.

The official running program for the 12-hour race finally got started on Thursday the 17th. In the first 60-minute practice session that began from 10:00am, Ihara got behind the wheel for the first time following a settings check by Devlin. However, up until that point the session had been interrupted several times by red flag suspensions and Ihara was only able to drive for three laps. Despite this, Ihara went on to say, “As this was my first time behind the wheel of a prototype in quite a while, I was a little surprised by the speed of the light engine. But by the second lap I began to regain my senses. As always, driving a car with a lot of downforce is really fun. I hope to be able to run a few more laps in tomorrow’s session and get an even better feel for the machine’s settings and the characteristics of the road surface.”

Regarding what she learned from the simulator, Ihara stated, “modern driving simulators are incredibly accurate and we were connected online to the team in Florida so the tests were very meaningful. Sebring’s famously bumpy road surface was scanned in detail and while interacting with the team I was able to carry out tests tailored to the Mazda prototype’s characteristics. Before even getting to Sebring I was able to attain a great deal of information, such as a clear understanding of how to attain grip using the car’s downforce and spots that the mechanical grip corresponds to. I also learned that by adjusting the suspension you can alter the behavior of the chassis. Furthermore, during the track walk I was able to check the real world road surface and receive a great deal of useful advice from my teammates.”

After the Mazda Motorsports Team had finished this practice day, their best lap was 0.5-1.0 seconds behind the lead car and their average lap time almost equal. Although the top 10 prototypes are nearly equal in their capacity and the competition is fierce, the Mazda prototypes are clearly competitive. On Friday the 18th another practice run will be held in the morning and followed up by a 15-minute qualification session.