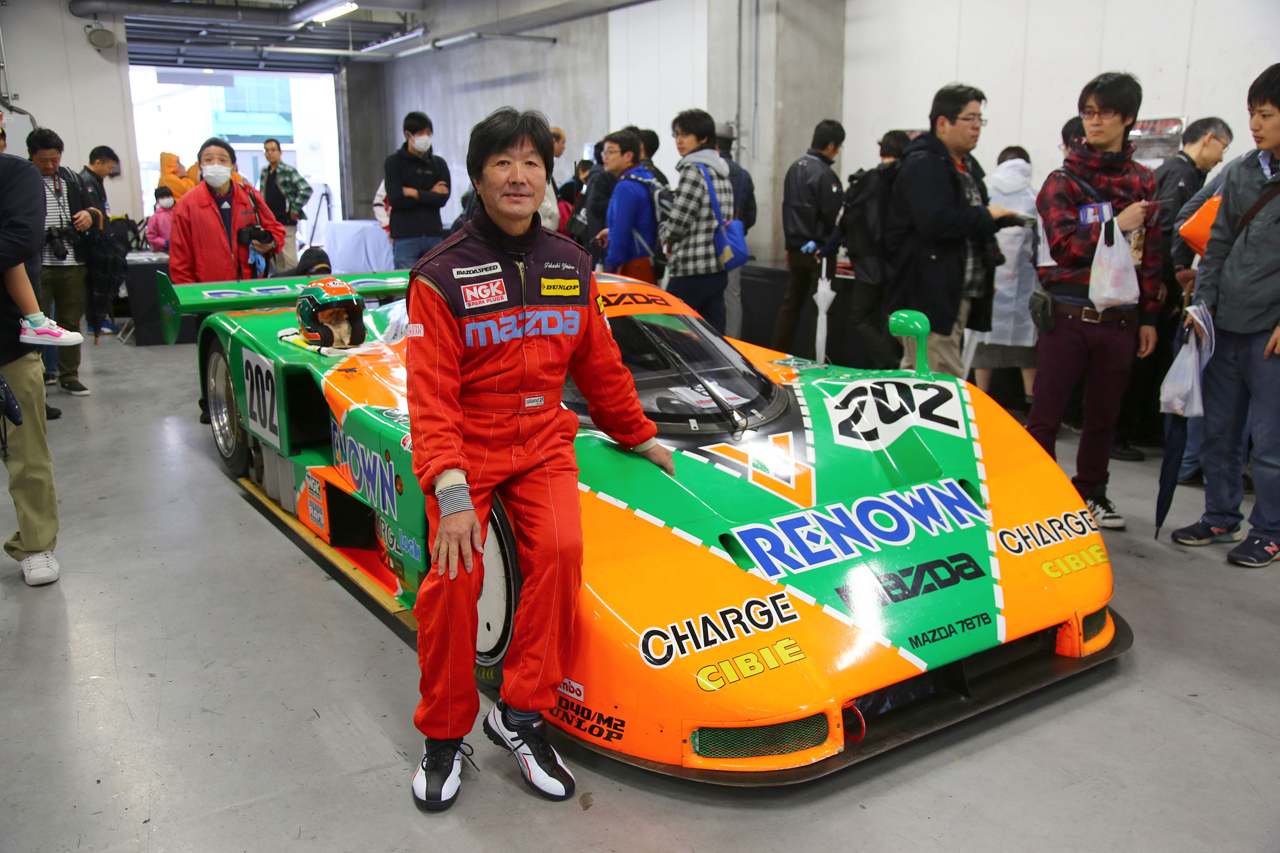 On April 24th (Sun) the Motor Fan Festa supported by San-eishobo Publishing was held at Fuji Speedway and, despite incessant rain and thick fog, which greatly decreased visibility, numerous motorsports fans turned out to enjoy the event. Within these, there was undeniably more than a few who had turned out specifically to see the Mazda 787B perform a demo run and so, when the run was cancelled due to the severe weather conditions, one could almost hear the collective sigh of disappointment.

This year being the anniversary year of San-eishobo Publishing, Japan’s largest publisher of specialty automobile magazines, the company threw out invitations to numerous domestic car manufacturer’s, importers, car part manufacturers, and so on and in concert with them put on this event. The highlight of the festival was undeniably set to be the demo runs and grid walks performed by F1, touring cars, drift machines, etc. on the 1.5km straight. For Mazda’s part, they brought out the #202 Mazda 787B JSPC, the Global MX-5 Cup Car, which was set to perform its debut run in Japan, and the Restore Project’s completely recreated Cosmo Sport. However, severe weather saw thick, dark clouds cover Fuji Speedway right from the morning and strong rain battered the circuit intermittently, creating full wet conditions. To make matters worse, a thick fog developed following the opening ceremony held at 9:00am and the entire course became completely enveloped in a white blanket of mist. This unfortunately resulted in the demo runs being called off, meaning the fans would have to make do with just seeing the three Mazda’s on display in the pits.

Former Mazda contract driver Yorino Takashi, who had been scheduled to take the wheel of the 787B in the demo runs, lamented, “I haven’t driven at Fuji for some time and was really looking forward to today, so it’s a little disappointing. However, there’s nothing you can do about the weather.” Despite this disappointment, he went out and greeted the fans enthusiastically. When Yorino appeared in the Mazda pits wearing his “charge colour” racing suit, all the fans present immediately began taking pictures and it became a mini make-shift photo shoot. The numerous fans from the 90s looked over the moon to be able to take pictures of their children (perhaps even grandchildren) with Yorino. The race fan spirit looks like it is alive and well within these successive generations.

Along with the car displays in the Mazda pits, there was also the now well established “monozukuri” (craftsmanship) exhibition, metal plate workshops, and so on, which kept the area brimming with fans throughout the event. In place of the grid walk, the Mazda 787B performed an engine warm up in front of the pits. As soon as the engine started up, more than 100 fans swarmed around and pulled out their smartphones to record the 787B’s roar on video.

The MZRacing store that was set up in the middle of the paddock also proved to be a crowd favourite. What was somewhat special about this occasion was the unusually large number of young children present. It was fantastic to see them eager to check if there was a model of their mother or father’s car and the enormous interest they had in rotary mascots, desk pads, and so on. Being able to experience this type of event while so young is almost certain to have a great deal of influence on them as they develop into adults. MZRacing will always welcome with open arms these types of future motorsports fans.

Along with this, various Mazda tuners like RE Amemiya Jidosha, R Magic, etc. set up booths and wowed the fans with a number of demo cars that included ND Roadsters and FD RX-7s.