Info on the Mazda Stand at the 44th Tokyo Motor show 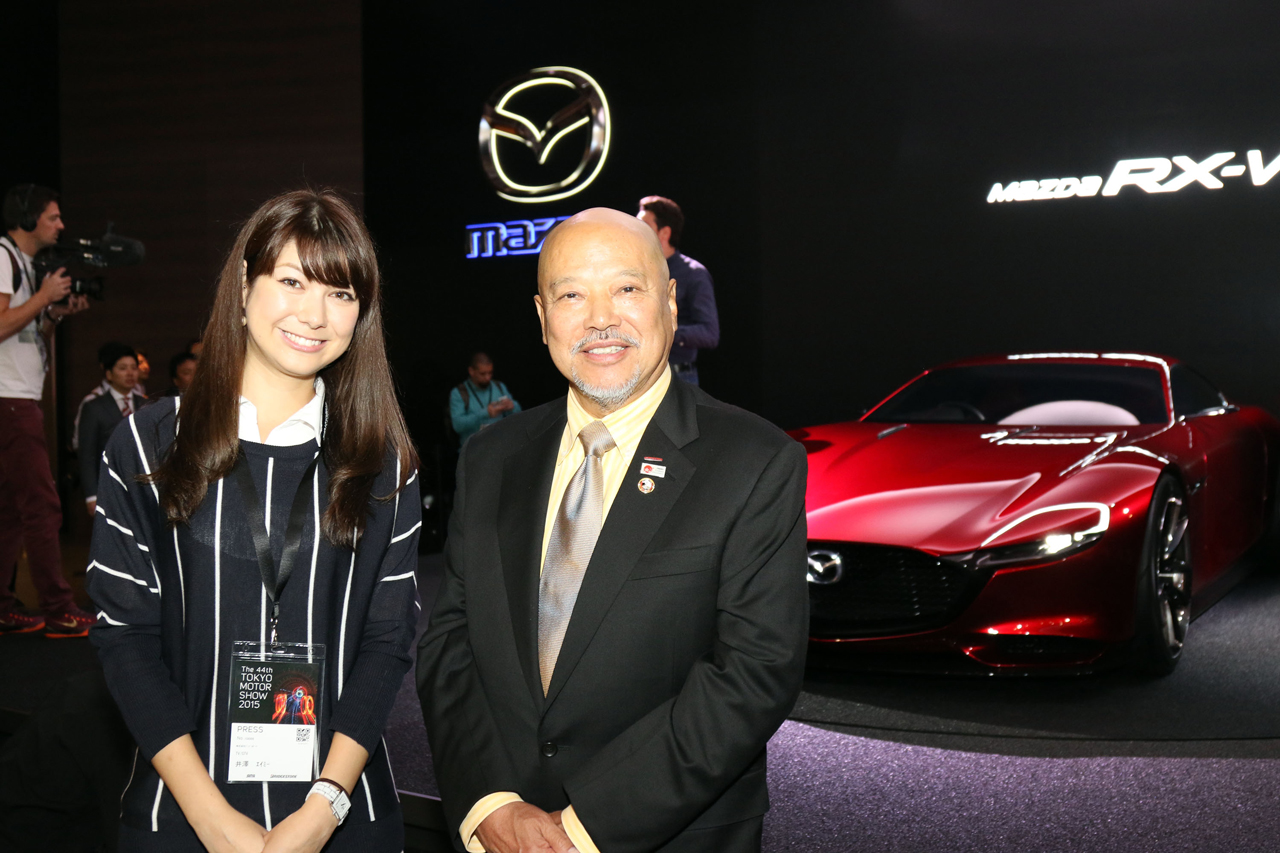 Info on the Mazda Stand at the 44th Tokyo Motor show Let’s take a look at the exhibitions at Mazda’s booth at the 44th Tokyo Motor Show where big names such as “Mr. Le Mans”, Yojiro Terada and Mazda WIMS project leader, Keiko Ihara have made an appearance. Also, there have been some schedule changes regarding when certain exhibition vehicles will be on display so lets recap on that as well.

As has been previously mentioned, the rotary sports concept, the “Mazda RX-VISION” takes center stage in the stand. Lined up to the rear right of that will be three new model Mazda MX-5s. These three are a (manual) model, the NR-A, which is fitted with a roll bar, etc. and is made for competition in the Party Race and so on, along with the left-hand drive Global MX-5 Cup Car (2-liter export base). Along with these, the late L10B Cosmo Sports is located to the rear-left of the RX-VISION separated by a small wall.

One of the MX-5s on display is the Global MX-5 Cup Car that was announced at the SEMA Show last year in November, which is to be the one-make vehicle for use in the “Global MX-5 Cup” where same-spec MX-5s will compete under global unified regulations. On display this time around is the prototype car that has been used for the vehicle’s development and which is quite close to the finalized specs. Mounted with a 4-cylinder, 2-liter SKYACTIV-G DOHC engine, a race-use roll cage, and so on, it is being supplied as a complete car able to compete in races straight out of the gate. Orders have begun in the U.S. and there have already been orders for more than 80 units. The price announced for the car was US$53,000 (at exchange rate of $1 = ¥120, ¥6.36 million). The release date and selling price for Japan has yet to be officially announced. An exciting aspect of this series is the fact that winners from regional series from around the world will be invited to compete in a global championship race at Mazda Raceway Laguna Seca. As mentioned in previous articles, the most appealing aspect of this event is the fact that the winner will attain the chance to participate in a one-day test of the pinnacle of Mazda’s race car line up, the SKYACTIV prototype. The Mazda Global MX-5 Cup has been created to serve as a full-fledged entry race category that keeps down the costs of competition and is easy to participate in. We’re looking forward to hearing more announcements regarding the series in the near future.

When we interviewed Mazda’s General Manager, Design Div., Ikuo Maeda he informed us that the “Mazda KOERU”, the culmination of the company’s “KODO: Soul of Motion” design in SUVs, was to be on display until November 3rd (Tues) and then from November 4th (Thur) the Atenza wagon would take its place. Along with these will be other SKYACTIV technology equipped cars, focusing on commercial vehicles such as the compact Demio, 4-door sedan / 5-door sport / station wagon Axela / Atenza, SUV / crossover CX-3 / CX-5, and so on.

The Tokyo Motor Show organizers, the Japan Automobile Manufacturers Association, Inc. have organized an exhibition dubbed Smart Mobility City that centers around a theme of “with more freedom… change our cars, change for lifestyles, change our society”, for displaying and experiencing new technologies. Technologies based on Mazda’s “MAZDA PROACTIVE SAFETY” concept will be exhibited here.

■ SMART MOBILITY CITY 2015: Overview of Mazda exhibits
Mazda will be holding an exhibition that explores concepts and technologies regarding safety. Technology that is based on Mazda’s safety concept, “MAZDA PROACTIVE SAFETY”, that provide drivers with appropriate cognition, decision and operational support to ensure peace of mind and security, such as omnidirectional sensing, human machine interfaces and so on.

The show will be open to the public until November 8th. The Mazda booth is located in the West Hall and Smart Mobility City, which also has some Mazda exhibitions, is in several locations: West Hall 4, the Rooftop Exhibition Hall and the Conference Tower.