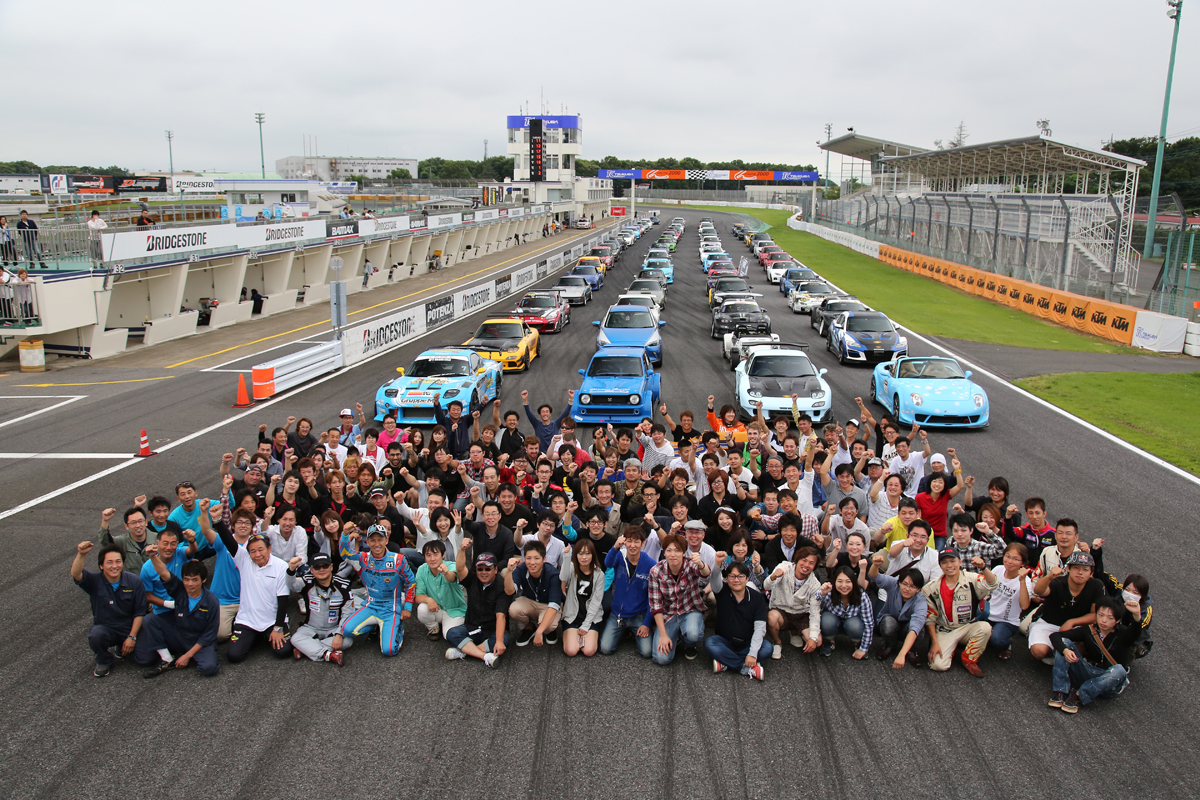 The seventh Mazda Tuning Festa was held on July 5th (Tues) at Tsukuba Circuit where a large number of Mazda and rotary fans, centered mainly around RX-7 and RX-8 owners, gathered together. It has been two years since the festival was held at Tsukuba, which was the location for the inaugural event in 2010.

This year’s centerpiece was the Tsukuba time attack carried out by the RE Amemiya Super Chanter 13B NA driven by Nobuteru Taniguchi. MZRacing introduced this Chanter to the world right before it was exhibited at the Tokyo Auto Salon held at the beginning of this year, so many of you are already familiar with it. The Chanter has been updated with numerous modern technologies and , who took the wheel for the time attack, took the RE Amemiya Racing GT to multiple victories in the SUPER GT. He has also recorded the fastest lap in time attacks at Tsukuba driving the NA3 RE Amemiya Rotor RX-7, amongst others. Under the attentive eyes of all those in attendance, the Chanter carried out a solitary time attack and immediately after its shakedown recorded a 1 minute, 6 seconds to enliven the event. Following this, Taniguchi took the RE Amemiya D1 Seven out for a rare demo run during the drift sessions.

Not only that, but the Knight Sports Macau GP machine carried out its first domestic circuit drive in quite a long time. Tatsuya Tanigawa drove on slick tires and the car’s setup remained relatively unchanged from that of the race in Macau, meaning that the gear ratio wasn’t quite suited to Tsukuba. However, he managed to mark down a 59 second lap that displayed a glimpse of the car’s potential.

For this year’s event, the most popular attractions required pre-registration and there were a large number of people who enjoyed riding in the passenger seats of shop tuned cars. There were also famous works shops showing off their machines, which carried out time attacks at near racing speed, D1GP cars that drifted down the straight with civilian passengers, and so on. Along with that, a race was held in which shop machines competed against each other and the fastest cars began from the back of the grid. All those in attendance were on the edge of their seat watching the red hot battles full of nail biting overtaking.

Later, the now customary circuit run of the Cosmo Sports Owners’ Club was carried out and the crowds were intoxicated by the rising engine sound of the Cosmo Sports, for which Mazda owes a great deal of its legacy. There was also a timed drive around the circuit of all the Mazda vehicles that turned out for the event, which was abundant in various models and generations of Mazda cars. At all the shop booths lined up on the paddock, numerous fans could be seen perusing the limited edition parts and energetically asking questions about exclusive race components. It was undeniably an event that exemplified the spirit of those who love rotaries, Mazda and customizing their beloved machines.

Despite being held on a weekday, the number of people who came out to participate in the Mazda Tuning Festa was impressive. To finish off the day there was a final lap around the circuit of Mazda and rotary vehicles. RX-7s, RX-8s, MX-5s, CX-5s, Atenzas, Axelas, Verisas, old school Mazda cars, such as the AZ-1, all ran down the home straight and were photographed together to herald the closing of the festival.