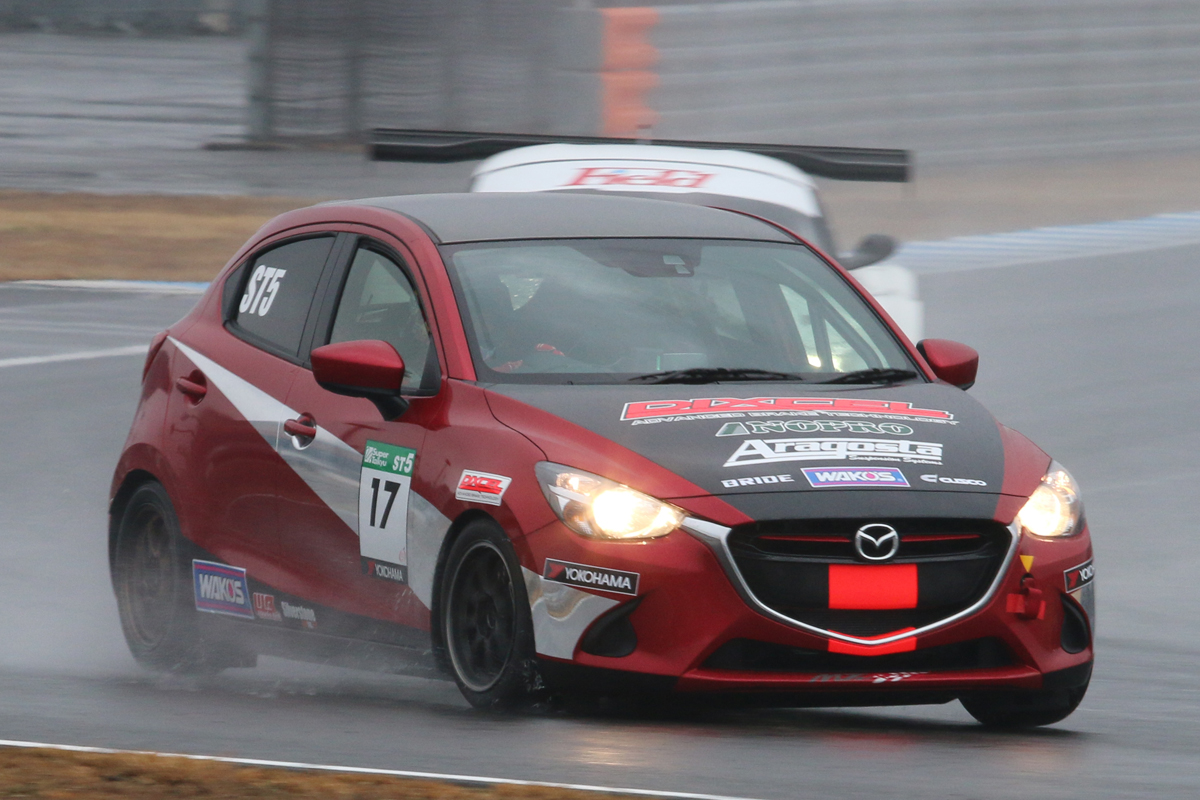 At last we are approaching the start of the 2015 Super Taikyu Series. With this year’s season to be televised on CS, passions are set to be inflamed at these intense racing battles. On the eve of the season, on March 1st (Sun), a joint test was carried out at Twin Ring Motegi, the venue for the opening round. MZRacing’s crew went down there to cover the performance of the new DJ type Demio SYACTIV-D being entered by team NOPRO.

This will be the first time for a domestically produced vehicle equipped with a turbo diesel engine to compete in a Japanese endurance race. For that reason, the team wanted to have plenty of time to work on the car’s development. However, with demand for the Demio being even higher than expected, the team did not receive delivery of their new machine until early in February. For this reason vehicle production was forced into a very tight schedule. At the same time, as the team will continue to enter the DE type Demio, which took home season 3rd last year, performance checks were implemented for this machine while development of the new DJ type Demio was being carried out.

With light rain falling right from the early morning, the four drivers of Toshihiko Nogami, Tatsuya Tanikawa, Tatsuya Nogami, and Hiroki Yamada gathered at the circuit. At vehicle inspections carried out prior to vehicles entering the track, the DJ demio was weighed at 1,030kg with a full fuel tank. At 1:00pm the joint test began. Since the front axle load of the DJ-type is a little less than 80kg over that of the DE model, the team hoped to attain some data on exactly how much extra burden would be put on the tires. However, due to the rain, the cars were forced to run on wet tires. First to take the helm for a 5-lap run was team owner Toshihiko Nogami. After checking the condition of the machine he handed the wheel over to Tanikawa. Tanikawa’s best time after running for 9 laps was 2 minutes, 42.48 seconds. When asked about his impression of the DJ-type, Tanikawa said, “compared to last year’s machine it still kind of feels like I’m driving regular passenger vehicle. The feel of the car is good and similar to that of the old model, so I’m just looking forward to driving it once its setup is more aligned with racing use specs.” Continuing on from Tanikawa, Nogami Jr. took the reins and ticked off consecutive laps.

With both the DJ and DE types running tests simultaneously, the pits were extremely busy. However we were able to hear Nogami Jr.’s impression of the new DJ type; “Since the wheelbase is 80mm longer than the DE-type, the displacement of the rear wheels feels a little sluggish. We think it may have something to do with the rear suspension bushing. Also, I think we need to put a little more thought into the torque band.”

After replenishing a small amount of oil, Yamada again to the wheel. However, after 9 laps he made an emergency pit stop. Although the team was briefly wrapped in anxiety, after conducting examination it was discovered that the issue was a minor slow puncture in the right front wheel. Apart from this there were no major problems. However, due to the increasing intensity of the rain, the test runs were ended early.

Having run a total of 44 laps without any serious issue, the team managed to make some reliable progress. However, with numerous tasks remaining before the opening round, including achieving improvements in top speed, the team’s key to success depends on how much they can advance the car’s development in the short time available to them. It’s not long until we will be able to enjoy this exciting competition that will see the DJ Demio SKYACTIV-D racing alongside other ST5 machines. We hope that you will keep your eye out on the future development of this NOPRO Demio racecar.