RE 50th Anniversary Celebration Goes Out With a Bang 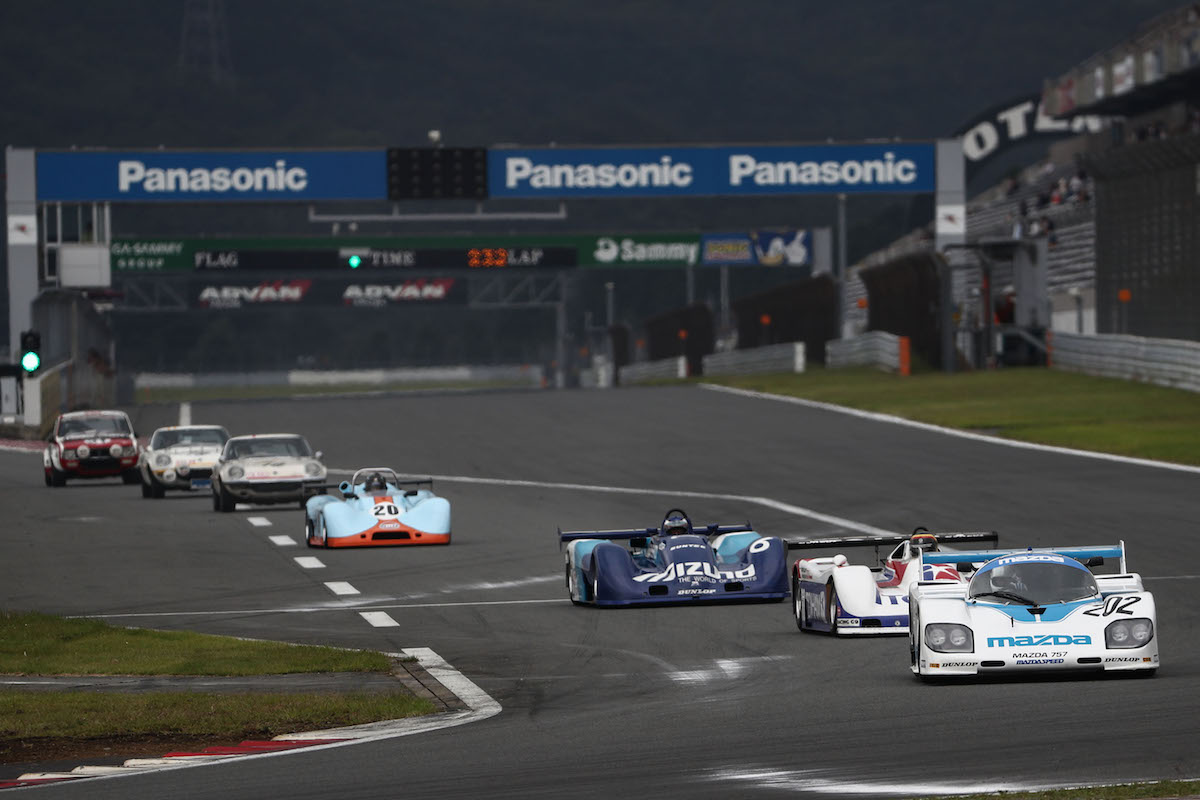 The “Racing Rotary Fan Meeting” was held at Fuji Speedway on September 24th at Fuji Speedway in conjunction with the final round of the GLOBAL MX-5 CUP JAPAN. The highlight of the event was the return of the ’86 Mazda 757 to Fuji Speedway for the first time in 30 years. Owner, Edi Taveri put up his own money to bring the revived Mazda 757 out to Japan in order to allow the Japanese RE fans to see it running on the track once more. The beautiful silhouette of the Mazda 757 that appeared at Fuji Speedway showed no signs of age and it sported the simple blue and white Mazda livery that it was decked out in during its hey day.

The event was begun with an opening declaration in Japanese from Taveri in the opening ceremony that began from 10:00am. In front of the stage were machines that had proved indispensable to Mazda Motorsport, beginning from Mazda 757, GC machines from the same era mounted with 20B engines, Cosmo Sports, Familia Rotary Coupes, RX-3s, first generation IMSA spec RX-7s, and the Macao GP Spec RX-8. Furthermore, with no pole partitions set up around the machines, every single person was able to get up close and take a commemorative photo with these legendary cars. This was also possible in the pit garage where maintenance was carried out on each machine and this just shows how much trust was placed in the good sense of the fans. As expected all of the fans who turned out were the utmost in respectfulness and passionately watched over every single car.

Four legendary individuals appeared on the rotary talk show stage. Former Mazda Speed Technical Director, Kunio Matsuura, who was involved in developing racing rotary engines from the 10A to the R26B, Ryuji Kobayakawa, who was critical in the early days of mazda through belonging to the RE research section, and serving as development chief of the FD3S, chief of public relations and design and so on. They were joined by “Mr Le Mans”, Yojiro Terada and Taveri. Core topics were expanded upon that focussed on the 757 and the 3-rotor engine. They focussed especially on the points of judgement regarding the choice between whether to use multiple rotors or turbos. They also discussed the technical difficulties in the division and joints of the eccentric shaft required by a 3-rotor engine and the explanation using real life parts fasciated the RE fans.

Then it was time for the long awaited demo run from the legendary RE machines. For this event as many as 12 owners of classic Mazda race cars brought out their beloved vehicles to greet the Mazda 757. As apposed to the 4-rotor engine mounted 767 and 787, so far 3-rotor engines have not been the lead actors in this event. However, this time three 3-rotor machines running together played the lead role and combined with 2-rotor peripheral port vehicles, the rotary roar reverberated throughout the circuit. When Taveri got out of the 757 following his run, he was greeted by a warm applause from the crowd and almost strangely it felt that everyone gathered at Fuji was united through the Mazda 757.

Lastly an RE-machine exclusive 165-car parade run was carried out. With the Maz-Tai race delayed by about 10 minutes, when the 165 cars entered the course to take a commemorative photo, the sky had gone completely dark. To be able to run on the course after the sun goes down is a very rare opportunity indeed for regular race fans. It’s certain that the 165 RE car owners truly cherished the experience.

It was a perfect event supported by lovers of the rotary engine and it warmed the hearts of all who turned out. We hope everyone else feels the same.