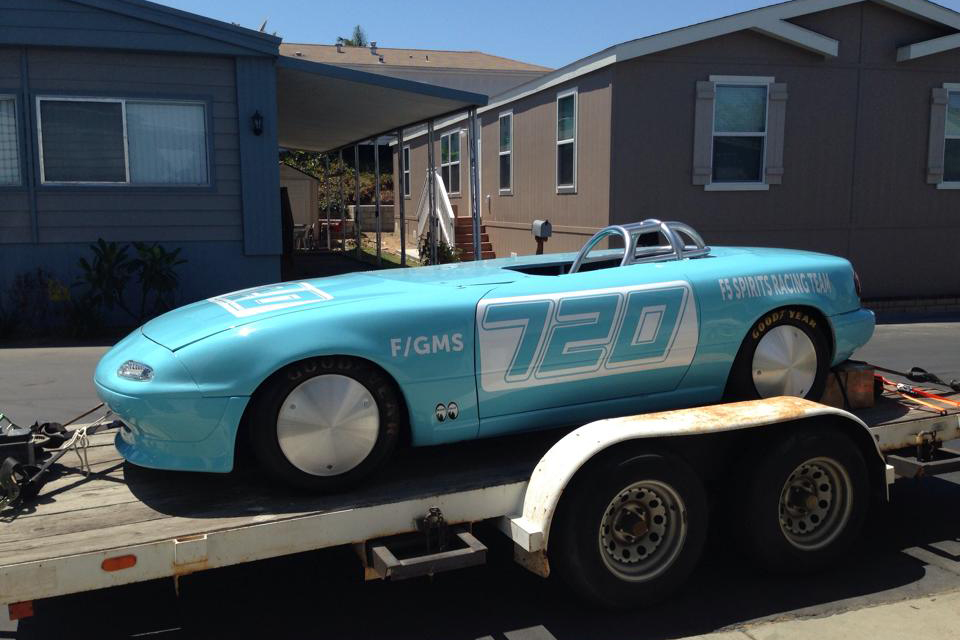 The F5 Challenge Project’s “Rotary MX-5” has finally been completed and has left Harbour City, California bound for the Bonneville Salt Flats in Utah.

The Bonneville Challenge first generation MX-5 has been mounted with a 13B rotary engine and adorned with “F5 Spirit Racing Team” decals. The “F5″ in the team name stems from level 5 of the Fujita scale (used to measure the speed of tornadoes) and indicates a speed of 500km/h. Within the next few years this project aims to record a top speed of over 500km/h at the Bonneville Salt Flats, a mecca for land speed challenge events. The concept that Harbour city resident, Sumito “Sam” Okamoto has been concocting over many years has at last taken its first step.

To begin with, this standard MX-5 was stripped down and its front windscreen and A pillar detached. Next, a roll cage was installed to protect the cockpit and the 180hp 13B rotary engine mounted. Though work on the car has been steadily progressing in Mr Okamoto’s garage, the final paintwork for the body was only completed last week. After this, the wheels, suspension, etc. were attached to the chassis, and electrification of the wire harness was completed on the scheduled day of departure, August 6th. Having managed to take its shape in time, the “F5 Spirit Rotary MX-5” was loaded onto a trailer and set out on its 1000km journey towed by a Mazda CX-9.

Bonneville Speedweek 2014 is organized by the Southern California Timing Association (SCTA) and, following an opening ceremony on August 9th (Sat), land speed challenge runs can be performed as many times as possible until the 15th. MZRacing will be there to report on the newly completed F5 Spirit Rotary MX-5’s attempts. Please stay tuned.