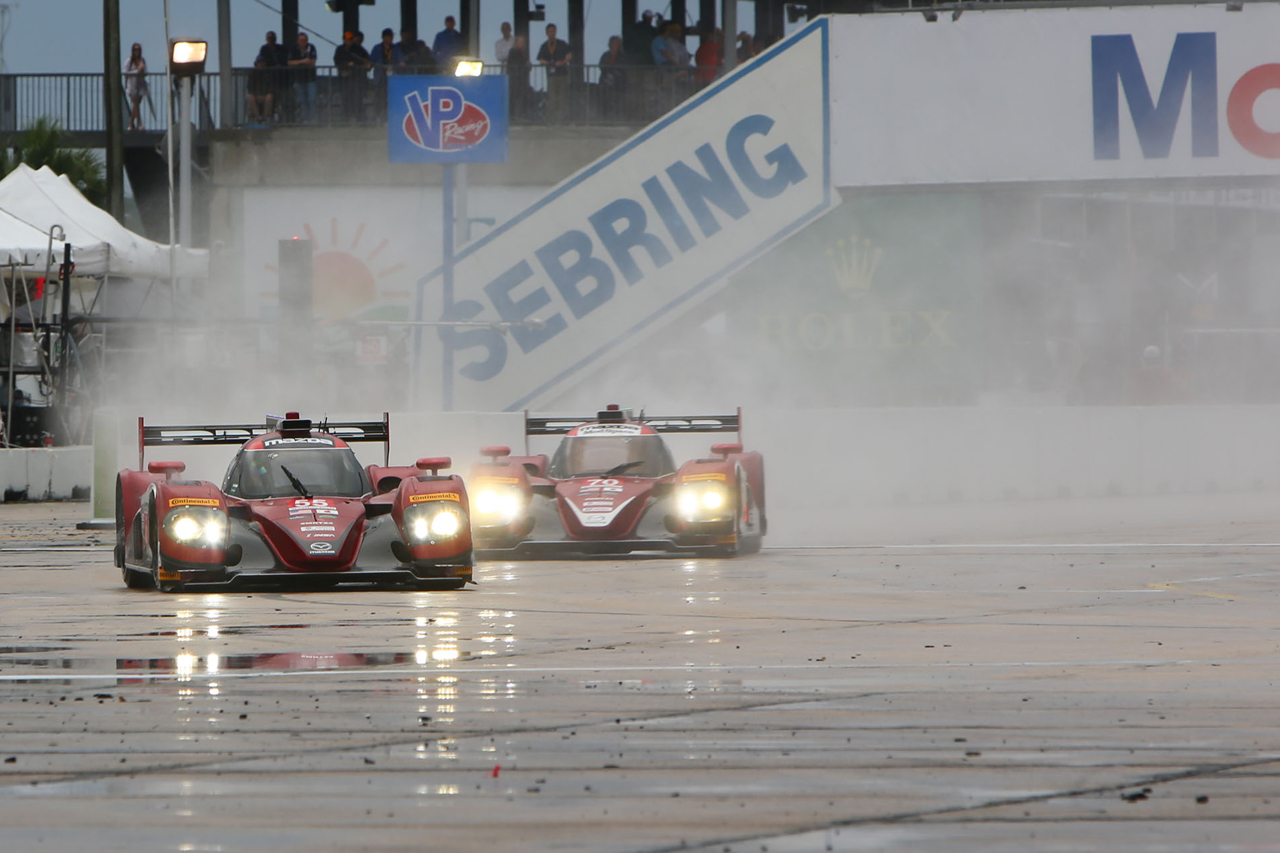 Falling to the mercy of changeable weather, the race frequently met with turbulent conditions. Beginning under dry conditions, both Mazda Prototypes got off to good starts and pitted at approximately 50 minutes after the race started at 10:40am. In the #70 Long handed the wheel over to Ihara. After exiting the pits, Ihara initially had some difficulties weaving through some GT vehicles but after that she rapidly regained the pace. Not long after, however, a yellow caution was raised and a safety car procession began. While this was happening, the sky above Sebring was darkened with thick clouds and large drops of rain began to fall. During this time, Ihara kept an eye out for a good opportunity to pit in but spun our just before the final corner. Ihara went on to relate, “I drove over some of the rubber that had stuck to the track and lost control. Still, I’m really glad I was able to avoid hitting the concrete wall and bring the car back to the pits in one piece. However, the SC car run was quite long, which was incredibly frustrating. I really hope to catch up the time I lost in my next stint.” The #55 pitted at around the same time, however both cars would go on to incur drive-through penalties, one for exceeding pit-lane speed limits and the other for violating prohibitions during a pit stop. This loss unfortunately created a significant gap with the top group.

Not long after this, the rainfall became a squall to the point where it was almost impossible to secure visibility. This led to a red flag race cessation and all cars parked along pit lane with every driver going in to take cover in the pits. From that point on an intense thunderstorm ensued and the race cessation continued for around 2 and a half hours. When the clock neared 4:00pm the surrounding area finally cleared up and the race resumed. After several caution laps behind the safety car, the green flag was raised and the the race restarted. That being said, successive accidents, spin-outs, etc. occurred one after another and each incident resulted in a yellow flag caution lap. Due to this, even though the two Mazda Prototypes sought to regain lost time, the caution periods forbid overtaking and their path was hampered continuously throughout the race. Meanwhile Ihara had been patiently waiting in the pits to get back behind the wheel, but due to the numerous yellow flags, was kept waiting until nightfall. However, once again thick clouds were forecast to close in on the circuit and, due to having no experience with night driving under rainy conditions at Sebring, Ihara’s second stint was called off.

With so many dispatches of the SC, the race saw close quarter, full-throttle action right up until the closing stages. Right to the end breathtaking developments unfolded with the lead being fiercely fought over in the last laps and a top running car crashing out right before the finish line. Both Mazda prototypes managed to avoid getting embroiled in the chaos, carried out strong performances and completed the race in overall 6th and 8th.

Mazda USA Motorsports Director, John Doonan
“Although we were disappointed at Daytona with both cars being retired, this time around our machines did not incur any major trouble and so it looks like this is going to be a good season for the team. As you saw, the race was really difficult and exciting but our Mazda prototypes were able to exhibit high levels of performance. It was a really rewarding race for us and I’m really proud of all the hard work that the team put in.”

Comment from #70 driver, Keiko Ihara
“I think this was a great result for the team. Although I was a little disappointed about only being able to drive one stint, I hadn’t driven in Thursday night’s practice session so when it became dark I knew I wasn’t completely prepared to take the wheel. There really wasn’t much to be done because the driver changes were messed up due to the rain. Still, the potential of this engine has become very clear to me and I’m really looking forward to seeing what it is capable of in the rest of the season. A big shout-out to all those who cheered us on.”