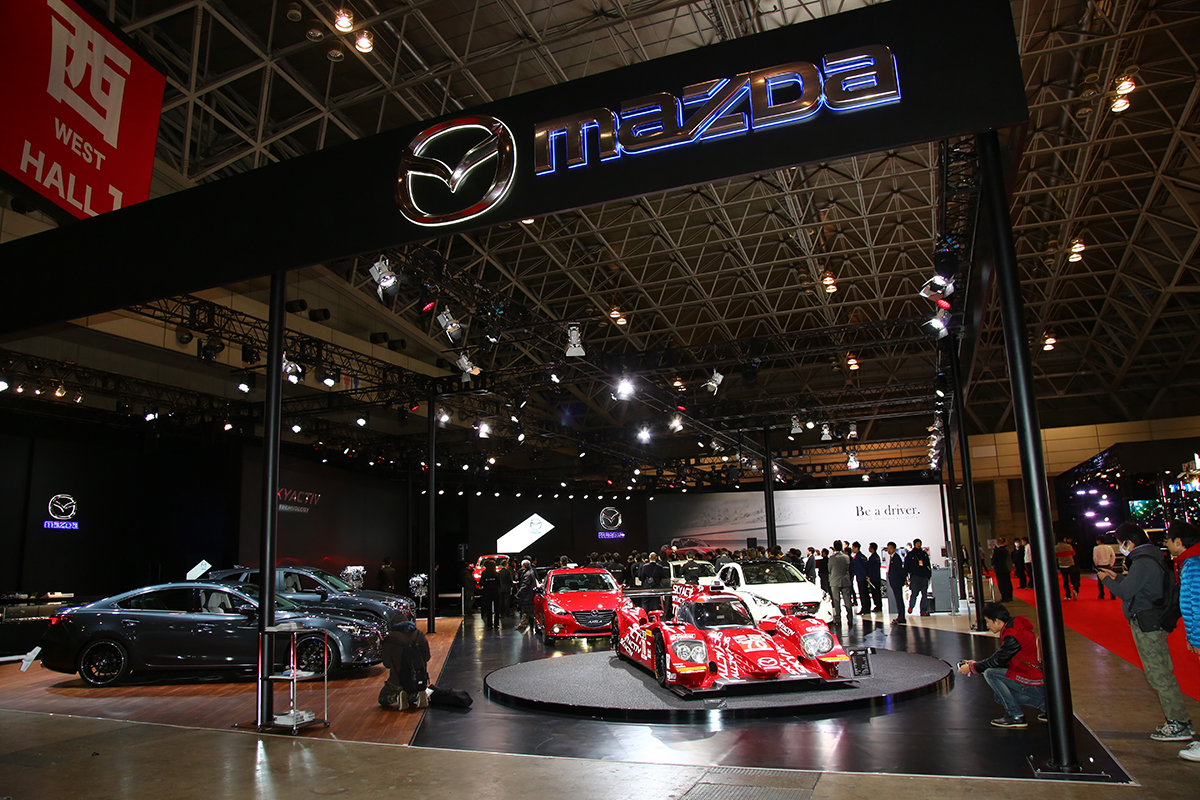 “The Tokyo Auto Salon 2015” was held over three days from January 9th (Fri) at the exhibition halls of Makuhari Messe (Chiba) where large crowds gathered at the Mazda stand to see the company’s much talked customised cars.

Beginning from the latest compact crossover SUV, the Mazda CX-3, and the new Mazda Roadster, which has only just been announced for sale from June 2015, a total of 13 Mazda vehicles were on display. These included the new model Demio, new Axela, and the new Atenza, which has just received a facelift. On the stage there were events such as talks related to the CX-3, the Roadster, and so on. In regards to motorsports, visitors’ eyes were drawn to the SKYACTIV-D Racing (show car) and the two new model Mazda MX-5 Cup Cars, for use in the Global MX-5 Cup, which were placed on a table at the entrance to the Mazda stand. With the official tests for this year’s 24 Hours of Daytona being held on the same weekend at Florida’s Daytona International Speedway, the soul red painted LMP2 SKYACTIV-D particularly stood out. Furthermore, with the announcement of the Global MX-5 Cup, to be held from 2016 in Japan, Mazda has established a motorsports ladder system for cultivating new drivers. Beginning from Mazda’s fully fledged racing simulator, iRacing, which gives users a virtual racing experience, there is also the Mazda Driving Academy for teaching students the joy of driving with proper technique, the Mazda Fan Endurance Race and Circuit Trial, which participants can compete in using their own cars with a registered license plate, and these follow onto the more advanced Roadster Party Race, where driver’s can further accumulate their experience. Finally, if drivers achieve superior results in the recently announced Global MX-5 Cup, they will have the opportunity to compete in a global shootout at Mazda Raceway Laguna Seca (California), the finalist of which will have the chance to drive test in an LMP2.

On the 10th and 11th a motorsports talk stage was carried out with former Mazda contract driver Yojiro Terada and racing driver Keiko Ihara, who is working to establish the new Women in Motorsport Project. For Mr Terada 2015 is a year to be celebrated, as it marks his 50th year of participation in motorsports. A recent addition to the Mazda racing family, Ms Ihara fervently expressed her desire to promote her new project for enabling women to experience the joy of driving through motorsports.

From the above it is clear that Mazda’s motorsports activities, focussed on grassroots categories, are set to become even more exciting in 2015. We highly recommend that anyone who is interested in motorsports, or sports driving, to make a trip down to the circuit this year.

On the evening of the 9th there was an awards ceremony and mingling party held for the top drivers from the Roadster Party Race II, Mazda Fan Endurance and Mazda Fan Circuit Trial. Furthermore, they were joined by the NOPRO team, which stepped onto the podium at the year end award ceremony for the Super Taikyu Race, held on the same day, having placed 3rd in the ST5 class. It was a congenial event in which these Mazda motorsports colleagues further deepened their rapport.