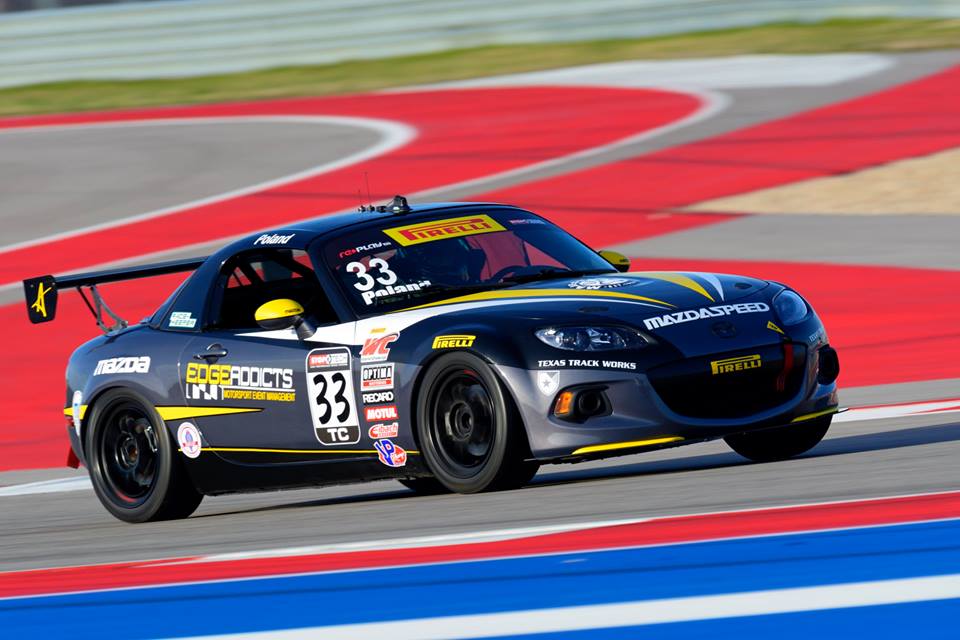 The opening round of the Pirelli World Challenge was held over March 6th-8th at Circuit of the Americas, located in the outskirts of Austin, Texas. The Pirelli World Challenge is a professional car race series with a history that spans 26 years. It is currently divided by vehicle speeds into 7 classes of mass production based vehicles, from the GT and GTA classes at the top to the relatively low power Touring Car B Class. A unique feature of last weekend’s event is that it held one race a day for three consecutive days.

10 Mazda machines were entered into this race. Competing within the Touring Car Class, which this year has changed its regulations to allow increased downforce through the addition of a rear wing, were five Mazda MX-5s, two Mazda RX-8s (both Touring Car A class) and three Mazda 2s (Touring Car B Class).

On the first day’s Touring Car Class race, Adam Poland, behind the wheel of his EASTEX Motorsports Mazda MX-5 (#33), got off to a soaring head start with a 3rd place finish. Riding on this momentum, Poland went on to take a fantastic 2nd place in round 2 on the second day. After completed the second round, he happily related, “An amazing day of racing. First race – finished 3rd. Second race – finished 2nd after starting in last place (car had mechanical problems and I missed my start position). I have been blessed to have some amazing days in racing but this day moving quickly to the top of my list. Thank you to everyone supporting the team!.” Although he dropped back to 9th position in the 3rd race, the fact that he was able to achieve such amazing results going head-to-head with a line up that consists of monster machines like the Ford Mustang V6, Nissan Altima and Volvo C30 is no small feat.

Although he didn’t manage to get to the podium, James Wilson, who competed in the Touring Car B Class with his Black Armour Helmets Mazda 2, managed to climb up 14 places in Round 3 to receive the VP Racing Fuels “Hard Charger” Award.

The Tech Sports Racing Mazda RX-8 was one step away from taking a podium finish in the first round of the Touring Car A Class but unfortunately fell down the order at the closing stages and was disappointed.

The Pirelli World Challenge Series will be making the rounds throughout North America’s major circuits and street courses, with the final round to take place in September at Mazda Raceway Laguna Seca (California). The Touring Car Class is scheduled for a total of 6 rounds of 18 races.