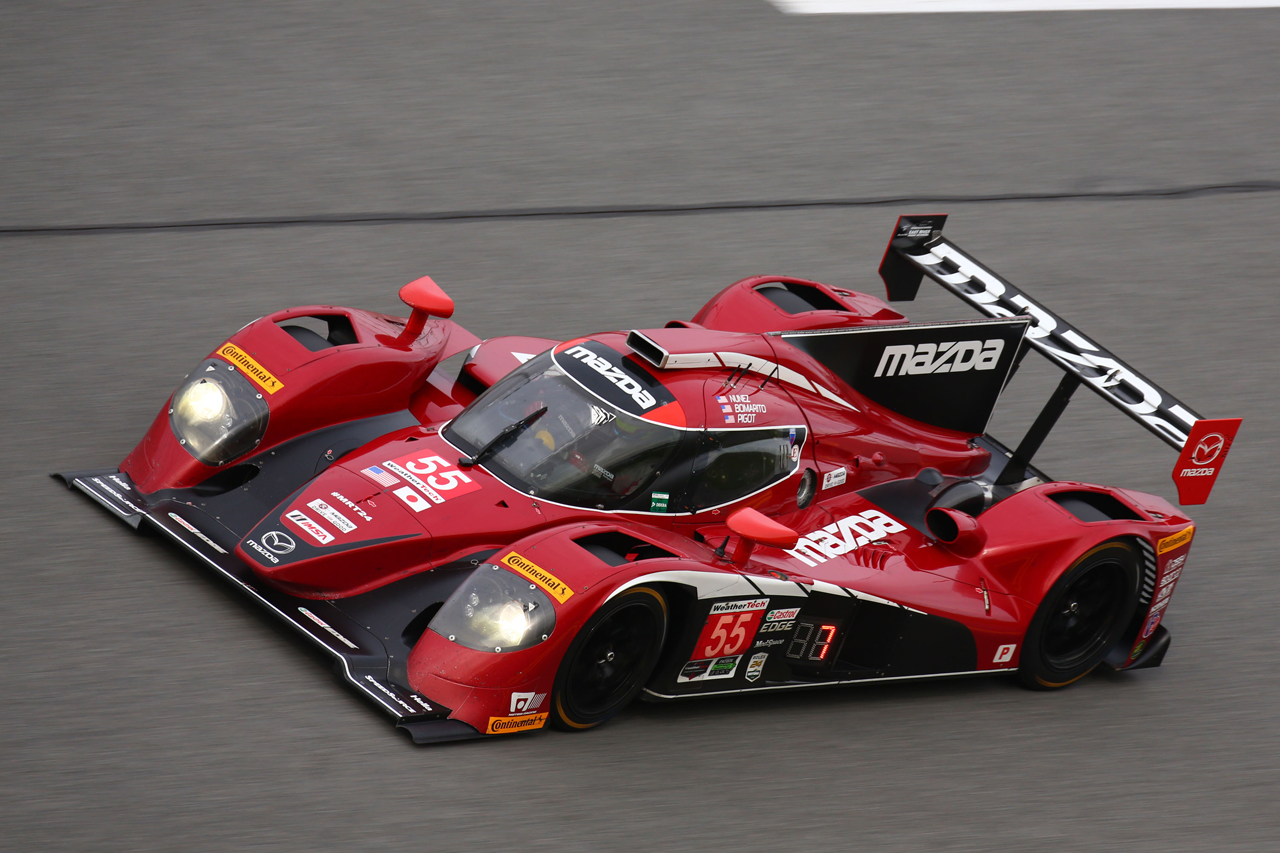 On January 30th under beautiful conditions at Florida’s Daytona International Speedway, on this year, the 96th anniversary since the founding of Mazda, the curtain was raised for the Rolex 24 At DAYTONA. The #70 Mazda prototype (Tom Long, Joel Miller, Ben Devlin) began from 10th on the grid while the #55 (Jonathan Bomarito, Tristan Nunez, Spencer Pigot) started from 12th. From there both machines displayed some serious pace and gradually rose up through the pack but unfortunately, after they both met with technical troubles, the #70 would retire 30 minutes after race start, while the #55 would retire at the 11-hour mark. The teams were unable to realize their goal of “seeing the sunrise” and their dream of a podium finish will have to wait until the next round, the 12 hours of Sebring (March 19th).

Just before the #70 took up its grid position prior to race start at 2:40pm on the 30th, Miller stated, “We’re starting from the rear but we’ll be fighting for a top spot in no time.” Immediately after race start the #70, with Long being the wheel, and the #55 began closing in on the cars in front. However, 30 minutes after the race began, the #70 suddenly stopped on the technical section dubbed the “International Horseshoe.” After it was brought into the garage for inspection it was unable to achieve a return to the track due to drivetrain issues. On the other hand, Nunez, who only recently turned 20, took the wheel for the start in the #55. After the #70 pulled out of the race, the #55 rose to 11th and continued to close in on the vehicles in front with each passing lap. One hour later, it had climbed as far as 7th. At that point it pitted once to refuel but did not change drivers. From inside the cockpit Nunez related, “There’s a little understeer but it’s easy to control. No problem.” During his two and a half hour stint before changing drivers to Bomarito, Nunez managed to raise them temporarily as high as 2nd place. At the time of the change he was running in 4th. One can only imagine how excited all the Mazda fans and car owners in the infield were while this was taking place.

Bomarito went back out onto the track with cold tires and, perhaps getting a little overeager, fell into a spin. There wasn’t any damage to the machine but it was a tense few seconds for everyone in the team. After that he began ticking off laps at the same furious pace as Nunez and, after pitting to refuel during a yellow caution, he returned to the course in the lead. After four hours the top of the leader board read “55”. However, the joy would be short lived. After taking the race leader position for the 3rd time, they pitted to refuel, but after pitwork was completed the starter button failed to function. The team hastily searched out the source of the problem and, after replacing the ECU, the car sparked to life. This incident caused them to lose 2 laps and fall back to 9th place but Bomarito was not going to let this faze him and refused to ease up on the pace. While still in 9th, he handed the wheel over to Pigot who also continued to tick off laps at similar lap times, again gradually closing the gap with the top group. This 22-year old 2015 Indy Lights champion has just stepped up to compete in a long-sought Indy 500 season after receiving a Mazda scholarship. This up-and-comer performed two stints before handing the car over to Nunez.

Nunez went on to perform a blistering attack to try and recover lost time but while he was running in 7th at just before 2:00am he was forced to stop due to flames that occurred to the rear of the car. The machine was transported back to the garage after the fire was extinguished. Unfortunately the fire-extinguishing agent covered machine would not be able to return to the track. At this point the ambitions of the team were sadly cut short. Mazda USA Motorsports Director, John Doonan described what happened, “The engine’s valve train broke and damaged the injector. That resulted in excessive fuel outflow and the exhaust gas ignited. This caused a mini fire that charred the rear wing. It’s unfortunate because we were well on our way to make up for the time lost due to electrical trouble. We carefully carried out numerous tests leading up to this race but it seems that they weren’t enough. However, the potential of the cars were clearly on display today. I think a podium finish will be within reach very soon this season.”

Although this race ended with a disappointing result, we’d like to send out a big thank you to all those who sent out support. The fervor from all the fans in Japan was felt right across to here in far away Florida. Let’s continue this passion into the 12 Hours of Sebring on March 19th.