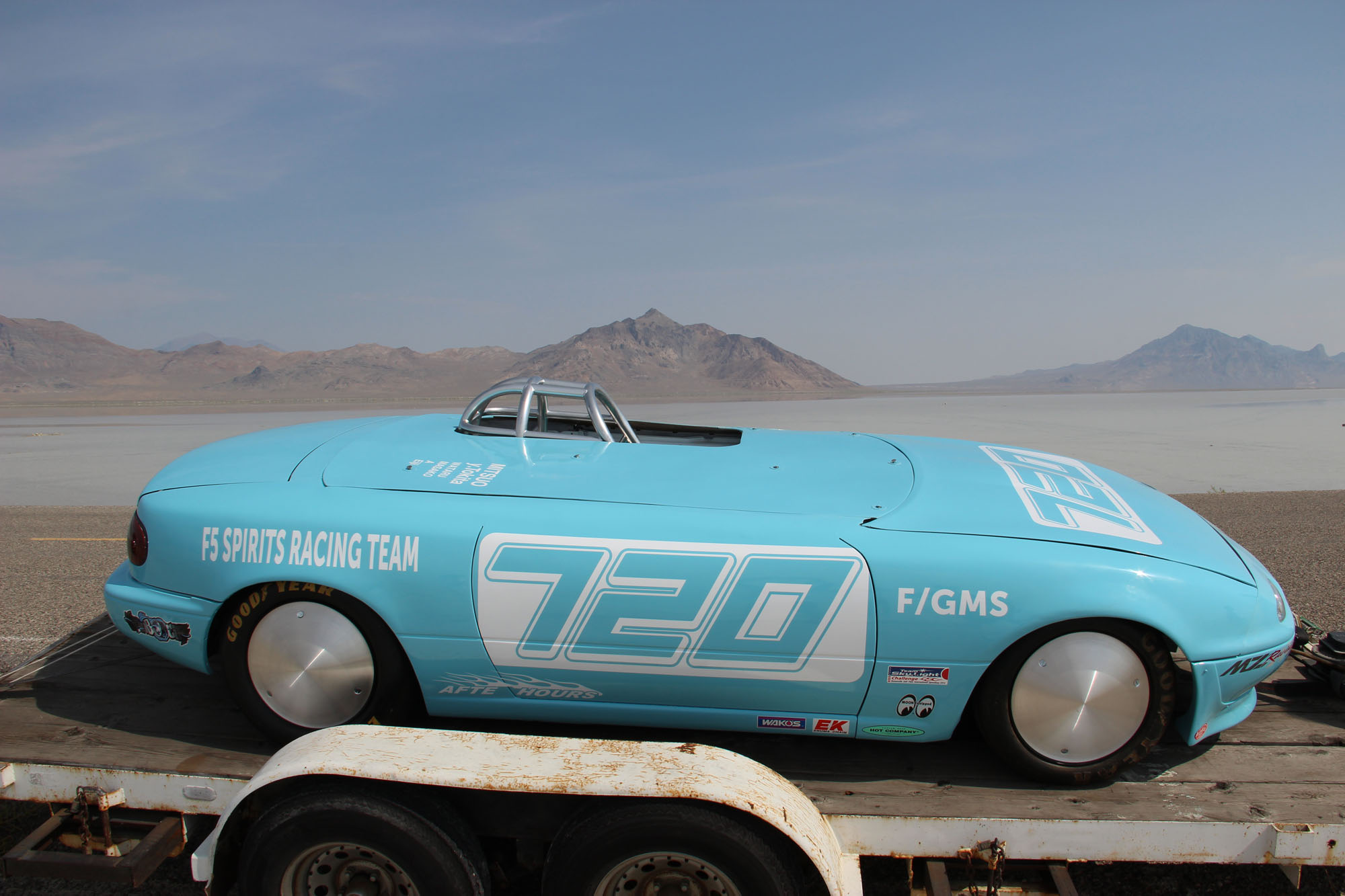 This year’s plan to attempt the Bonneville Speed Challenge that Sumito “Sam” Okamoto (currently living in the suburbs of LA) has been progressing has unfortunately stalled. The reason for this is that the pivotal event was cancelled when the venue, the Bonneville Salt Flats, became marred by rain.

Construction of the machine, which took a first generation Mazda MX-5 chassis and mounted it with an FC3C RX-7 cabriolet NA 13B rotary engine, was completed on August 6th and the vehicle then made the 1000km trip from Harbor City, California to Bonneville, Utah. Various adjustments were left unfinished in order to be able to take part in the racing but they would have had plenty of time to get that done in the field. The event they were to take part in was a magnanimous affair where, beginning from an opening ceremony on August 9th (Sat), speed attempts could be made on the designated course from dawn to dusk every day until the 15th. However, the night before they arrived, heavy rain fell on the salt flats (which are themselves the dried up remnants of prehistoric Lake Bonneville) and the venue became inundated. The event organizer (the SCTA) then informed all entrants that the event would be “postponed for 3 days.” Although Okamoto’s team had begun to finish the last adjustments to the car on site, as if by some cruel twist of fate, rain again started falling and a ripple of anxiety swept through the group.
After going to the salt flats to confirm the situation they found that the amount of accumulated water was more than 30cm deep and it seemed “very doubtful that it would be possible to compete within a few days” (Okamoto). Foreseeing the outcome, Okamoto made the decision to pack it in and his team began making moves to leave. Soon after this the SCTA made the official announcement that this year’s Speedweek would be cancelled. Okamoto told us, “It breaks my heart to have to head home without competing but I’m going to take this as fate telling me to come back after having properly honed my skills. From now I’m going to carry out numerous test runs around California, perfect the car, and come back again next year to rewrite the class record of 200.240mph (320km/h).” He then laughed and said, “Getting to F5 (500km/h) is still a far away dream.”

The F/GMS class, that the rotary MX-5 will be competing in, is for modified vehicles based on production sports cars of between 2 & 3 liters and it permits the replacement of the original engine. The compact NA 13B rotary engine has been mounted into the also exceedingly compact chassis of the first generation MX-5 and will use the car’s original gearbox. Okamoto has also made the unconventional move of removing the engine’s standard water pump and creating a system that uses an electric motor to force water circulation. This would have provided ample cooling due to the very short driving time but it seems that it is compulsory to outfit a radiator. The fuel supply system utilizes a Weber downdraft carburetor and, as it will only be running in a straight line, removal of the front breaks has been permitted. This is a very unique machine.

Okamoto’s project is being carried out with voluntary support. Through watching their efforts, all rotary and Mazda fans can share in their dream of setting a new land speed record.