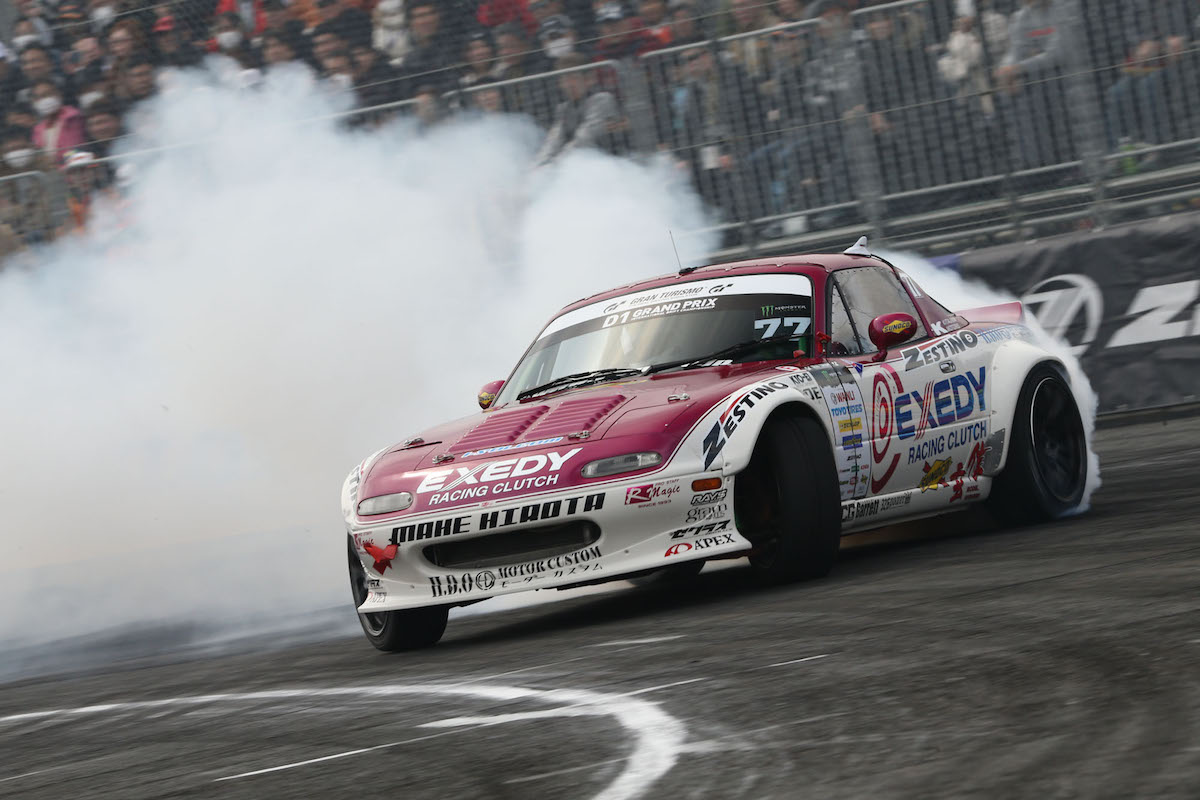 The first and second rounds of the D1GP were held over April 1st and 2nd at Odaiba’s special course where four Mazda machines competed. These were the #7 “Team RE Amemiya GruppeM’s” RX-7 of Yukio Matsui, Takahiro Imamura’s #21 “SAMURAI KANTO TOYO TIRES” RX-7, the  Manabu Fujinaka driven #88 “TCP MAGIC” RX-7 and the #77 “EXEDY R Magic D1 Racing” Roadster with Iwai taking the wheel.

The university student maintained #31 RX-7 (FC3S) of Imamura was forced to retire from both rounds with electrical trouble. The round 1 “tanso” (single run) finals were held under rainy conditions where #7 Matsui slipped on a large puddle at the first corner, sending him into a half spin and causing him to lose his rhythm, which he was unable to regain and this saw him eliminated. Matsui went on to say, “I felt like I had to really smash it out in my second run but I pushed a little too hard.” Despite the road surface gradually drying up for the tanso second round, Matsui was unable to grab a high score and was eliminated in qualification.

#88 Fujinaka passed through qualifying for both tanso rounds but was unfortunately eliminated in the finals. He was unable to advance into the “tsuiso” (chasing race) tournament. Fujinaka went on to relate, “My angles in the first and second sectors weren’t sufficient and then between sector 2 and 3 I just lost form.”

On the other hand, #77 Iwai seemed to struggle with the wet road surface in round one’s tanso and dropped out. However, when conditions dried up for round 2 he was able to advance into the best 16 of the tsuiso finals. At that point he went up against #60 Yoichi Imamura but his angles were too shallow during his chase run and he was eliminated, finishing 13th overall. Iwai later said, “For some reason I got really nervous when it came time for the tsuiso.”

This year D1 regular, Iwai is competing in the D1GP with the support of R Magic. He told us about their machine, “I’ve always liked the roadster and it caught my eye because it’s so easy to throw around. The engine has been exchanged to a cross port 13B combined with a Garrett GTX 3582R turbo and produces about 550 horsepower. By reducing the size of the turbines it has become a lot easier to handle but I still need to get used to the new tires. This year I’m competing with R Magic D1 Racing and so the support structure has changed quite a bit. They provide seriously solid back up and I’m going to do my best to live up to their expectations.”