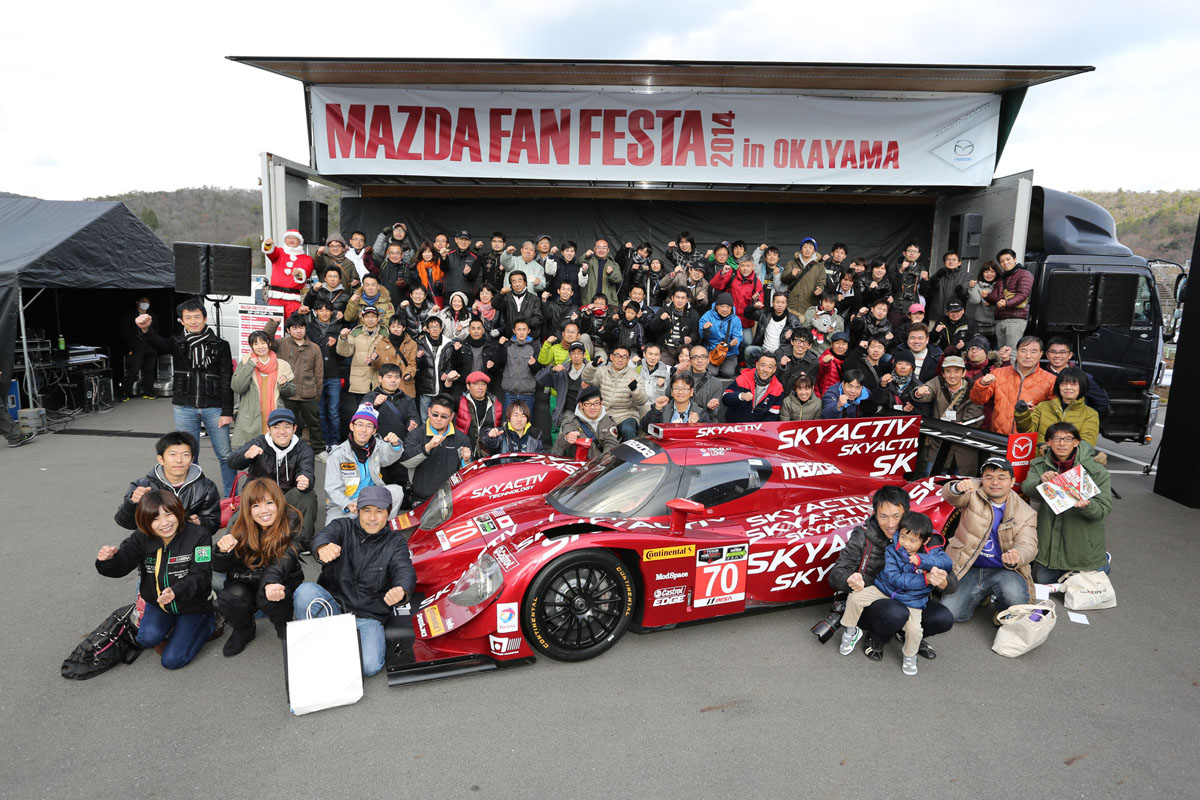 On the day of the event, Dec 7th (Sun), the Japanese archipelago was chilled by a cold wave and snow had been forecast. However, fortune shined on the organizers and the 3rd Mazda Fan Festa was held at Okayama International Circuit under fine weather.

From early morning on the day, the public roads surrounding the circuit were filled to the brim with Mazda vehicles from Chugoku, Shikoku, and even the Kansai regions. The parking lot within the venue was divided into sections for each model and these spaces gradually began to be occupied. When the hustle and bustle of these vehicles had somewhat settled at around 10:00am, Mazda Motor Corporation’s Managing Executive Officer, Masahiro Moro, rose to the main stage and announced the beginning of the event.

On the racecourse, track events such as the attack run of the Mazda Fan Circuit Trial and qualifying sessions for the Mazda Fan Endurance Race were held, while on the stage there were consecutive introductions of key Mazda members and former Mazda patriarchs. Also, there was a ceremony to celebrate the return of the race Grand Champion (GC) trophy to former Mazda driver, Takashi Yorino. Yorino contributed this trophy himself and it was sold at auction in 1985 at the Mazda Rotary Midosuji Showroom. The Kobe resident who won the bidding stated that he would “like to return this priceless trophy to Mr Yorino,” and thus, this ceremony came to be held. With an air of nostalgia, Yorino went on to say, “I can still remember vividly the day I first won the GC. I managed to take 3 consecutive wins at that race.”

In the afternoon, there were demo runs of currently competing racecars, as well as former Mazda race cars that took the world by storm. Included in this was the traditional “rendezvous run” of the Mazda 767B and the Mazda 787B driven by Yojiro Terada. The dual roars of these 4-rotor beasts had everyone in the audience letting out cheers of admiration. Another highlight of the day came when Aichi Resident, Jin Kato, appeared in his 1970 Mazda Familia Rotary coupe that he is planning to compete in at the Classic Car Race to be held at Belgium’s Spa-Francorchamps next year. He and his friends lined up in 5 of the same machines and performed a demo run. Following this, Masami Katakura, who served as a driver for the Mazda factory team, and Kunio Matsuura, who worked as an engine mechanic for the same team, related their memories for the outstanding performance of the Familia Rotary Coupe at the 1970 24 Hours of Spa. They also gave some kind words of encouragement to Kato for his Spa Challenge.

After a parade lap was carried out for each model of vehicle, the Mazda Fan Endurance Race was begun. Every year the Mazda Executive Team participates in the race. This time however, there was also another car competing as a General Manager class team. Considering the fact that the Mazda theme recently has been to “Be a driver,” the fact that the executive drivers themselves got involved in the experience is very significant. They, along with the 4,030 Mazda Fans who gathered, had a great deal of fun on the day and fully enjoyed the thrill of driving. As an event finale, 300 Mazda vehicles carried out a parade lap. Although the surrounds had become completely dark, the convoy of 600 head and tail lamps colored the night circuit and created a breathtaking scene. We hope to see everyone again next year.