RE Symphony Reverberates Throughout Monterey Reunion 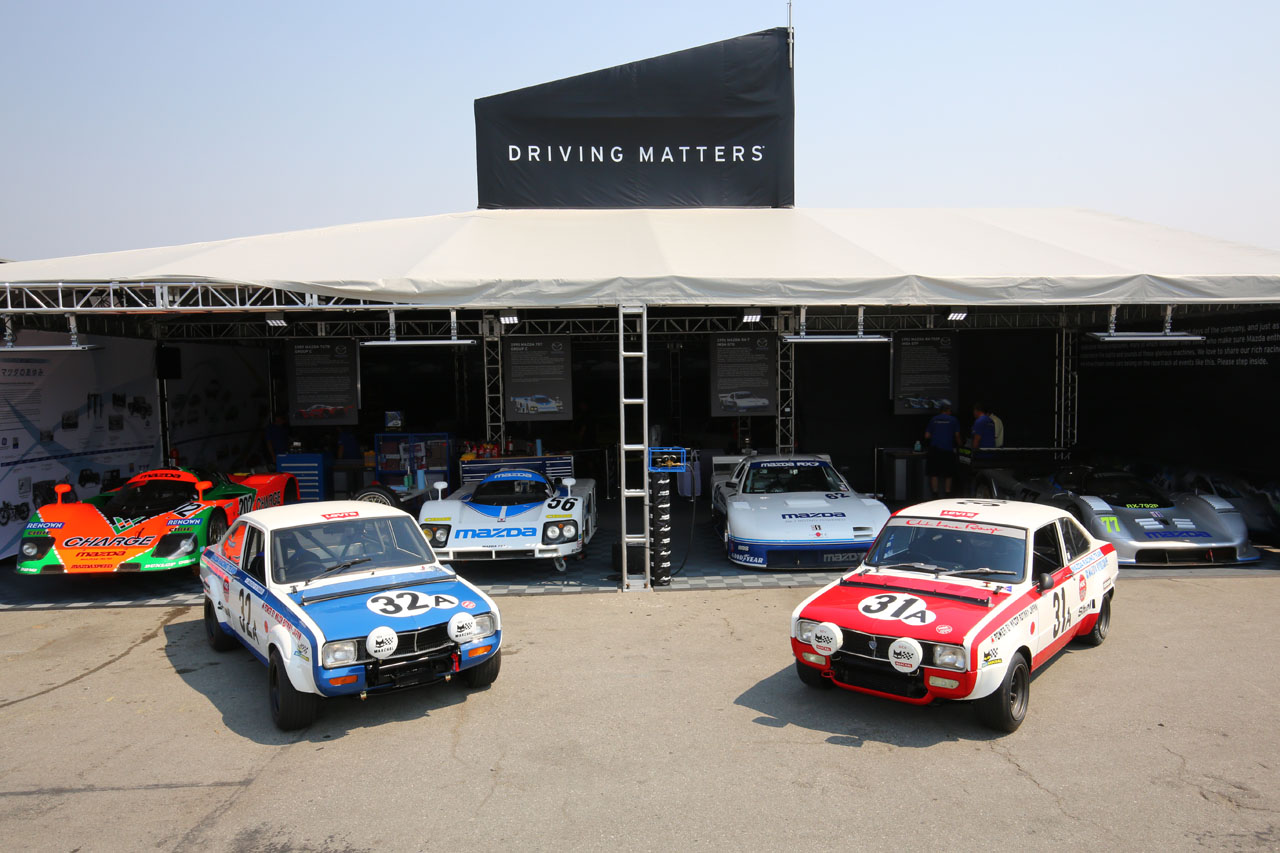 The Rolex Monterey Motorsports Reunion, the largest historic car event in the US, was held over three days from August 18th (Thur) where the Mazda booth was studded with four 4-rotor engine mahines which enthralled onlookers with their Wankel engine orchestra.

This event sees a variety of different historic racing cars, legend formula cars, such as F1 machines and Indy cars, amongst others, gather together from all over the US to carry out numerous race format demo runs. Mazda USA brought out three 4-rotor racecars that they have maintained in running condition, the RX-7 GTO (1990), the Mazda 787 (1991), and the Mazda RX792P (1992). These three machines were joined by the recently restored 1989 Mazda 767B. When Mazda USA Motorsports Director, John Doonan raised a black conductor’s baton, the four vehicles that had been warming up all returned to an idling state in unison. Moments later, when he began to wave his baton, all four vehicles extravagantly roared their brap-brap symphony in harmony with his direction. The crowd of people that had gathered around the Mazda tent were delighted with the spectacle. When videos of this were shared on social media, they immediately went viral with rotary fans around the world. What was particularly interesting was the fact that the drivers for all four of these machines were top management of Mazda USA. Mazda USA Vice president, Robert Davis was joined by Jeremy Burns, Director, Public Relations and Brand Experience, Weldon Munsey, Manager of Partner Affairs and Design manager, Ken Saward.

There were also some other special rotary machines that took part in the event. The #31 (red) and #32 (blue) 1970 24 Hours of Spa-Francorchamps spec Mazda R100s (Familia Rotary Coupes). One of these was the car Aichi Prefecture’s Jin Kato drove and garnered a great deal of attention at last year’s “Spa Masters 70s Celebration.” The #31 was Ehime Prefecture local Katsunori Tamaru’s beloved machine that was stripped down and sent to California where it was rebuilt. The eloquent exhaust sound of the 10A rotary engines reverberated throughout Mazda Raceway Laguna Seca’s famous corkscrew. Kato went on to say, “After driving at Spa I really wanted to one day have the chance to drive the R100 Rotary Coupe at Laguna Seca. I’m not sure why, perhaps the engine didn’t handle the long trip very well this time, but it wasn’t really behaving quite right and I struggled throughout qualifying. However, thanks to all the advice I received from people in Japan, I managed to bring the machine back to life and it drove well during the race. This will definitely become another priceless memory for me.”

Leading up to the reunion, track sessions, dubbed the “pre-reunion” were held at Mazda Raceway Laguna Seca over August 13th (Sat) to 14th (Sun). This was due to the fact that a large number of the old race cars the gathered at the circuit required some adjustments before the real deal. Mazda’s four 4-rotor machines also took part in this pre-reunion. Numerous engine readjustments were carried out. Coinciding with this pre-reunion was the arrival of the “Support Our Kids” (SOK) group of junior-high and high-school students from Japan, who paid a visit to the track. The group had just paid a study visit to the Mazda USA R&D Center in the suburbs of LA on the 12th. There they gave a presentation to the staff members in which they related the tragic events of the 2011 Tōhoku earthquake and tsunami, as well as the current state of recovery in the region. Expressing their gratitude for all of the assistance that they received from regions all around the world, these young adults impeccably fulfilled the role of ambassadors of friendship. That evening they all went out to Dodger Stadium to see a major league baseball match. Although he sat out of the game, the Dodgers’ Japanese pitcher, Kenta Meada took part in practice and all the kids were over the moon when they were granted the chance to meet him and shake his hand. The following day they travelled 700km North to Monterey, where they were able to enjoy some fee time at an aquarium. On the morning of the 14th they then headed to Mazda Raceway. The kids were all overwhelmed by the sounds and smells of seeing their first real life race cars, but after being allowed to sit in the cockpit of the machines at the Mazda tent, their anxiety was immediately extinguished. At lunch time they were all given the opportunity to sit in the passenger seats of Mazda 6s or MX-5s and experience two hot laps of the circuit. The kids could be heard excitedly saying, “It’s like a roller coaster ride! Race cars are amazing!” Following that they were all able to watch the Mazda 4-rotors run on the track from the hospitality room. Yojiro Terada, one of the main proponents for this project, taught the kids about Mazda race cars, the scale of the 24 hours of Le Mans, and related the true allure of motorsports. They all listened intently and were clearly enthralled by the stories. It is undoubtable that the entire group of SOK kids that took part in this experience will all come away with special memories that will continue to inspire them for the rest of their lives. It was truly inspirational to see the sparkle in their eyes. This circuit tour project, which acts as one of Mazda’s social contributions, will be heading into its fourth year next year.

Photo by MZRacing and K. Nakajima