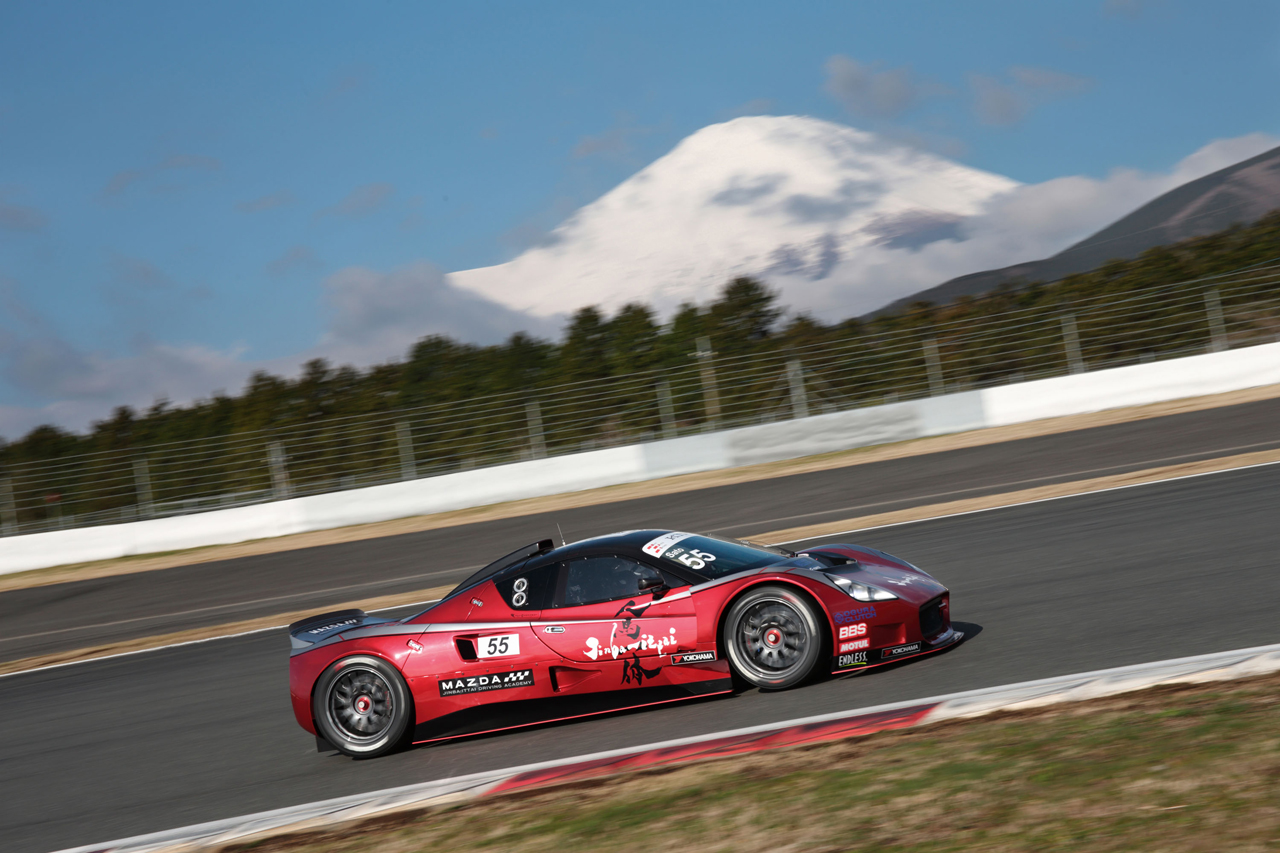 There was surely more than a few people who were excited by the sight of the “Jinba Ittai” (unity of rider and horse) decal sporting, familiar soul-red painted sports car competing at Fuji Speedway over April 2nd to 3rd. On top of that, the drivers of this machine were “top-gun” experimental driver, Masahiro Sato, well known with Mazda people in the know, and Hiroshima born top racer, Yasutaka Hinoi.

However, the #55 “Jinba Ittai Driving Acadamy” race car is not actually a Mazda vehicle. It is an original vehicle developed by founder Masanori Sekiya, who was the first Japanese driver to take victory at the 24 Hours of Le Mans in 1995, and this machine been dubbed “Kuruma” (Japanese for “car”). This two-seater, mid-ship sports car mounts a 4-liter V6 engine behind the driver’s seat.

The one make race in which “Kuruma” competes, the Inter Proto Series (IPS), began in 2013. This race, where both pros and amateurs take the wheel, is almost exclusively decided through the abilities of the drivers. For this reason, although Kuruma is equipped with a paddle shift, it does not utilize ABS, which is the standard for most commercial vehicles. This is because drivers can not hope to improve if their driving is dependent on electronic devices.

One of the unique features of the IPS is that amateurs compete alongside pro drivers. Spectators greatly look forward to seeing the type of performance first-class pro drivers are capable of. At the same time, amateurs are able to see the difference between their own driving and the pros through data loggers, making it not only a great opportunity to compete but to also attain some invaluable information on high level driving. This time around the #55 “Jinba Ittai Driving Academy” race car sees Sato competing as an amateur (“gentleman”) and Hinoi racing as a professional entry.

MZRacing spoke to Mazda Managing Executive Officer, Kiyoshi Fujisawa when he came out to Fuji Speedway on April 2nd. “The main reason for competing is to further develop the abilities of Mazda’s in-house test drivers. We improve the competence of our top guns through competition and pressure. In the future we expect that it will be necessary for our test drivers to have developed experience that goes beyond that attained at our Miyoshi and Mine proving grounds. To be honest, we are having issues with the conditions of our own test vehicle inventory, such as the FD3S RX-7. We looked into many options, such as competing at Nurburgring, but in terms of costs and schedule, participation in this series was determined to be the best choice. I think we will continue to compete here next year, sending not just drivers but mechanics and so on.”

In qualifying Sato recorded a 2 minute, 2.664 second time, 7th fastest of the 9-strong pack (road surface: semi-wet). As for Hinoi, he recorded a 1 minute 55.409 seconds as the track gradually began to dry in places, however trouble occurred towards the end of the session. This led to the team rapidly replacing the transmission. Although they were able to finish repairs and get the #55 on the starting grid, they were unable to fully get the car up to competitive condition and were unable to race in the first gentleman’s final.

Unfortunately, the following day’s morning met with rain. Although Sato has experience driving in the Media 4-Hours Endurance Race, this was his first time competing in a sprint race behind the wheel of a sports car and he had never driven the Kuruma over a full wet road surface. Having been absent for the first race, he began the 12-lap, 25 minute second race from the tail end of the grid. The start method was also changed and began behind the lead of the safety car.

After the formation completed four laps the race finally began. Sato aimed for the checkered flag while chasing down his opponents. Mid-race he was forced to go off track in order to avoid making contact with a car the spun out in front of him but he made it back onto the course unscathed. Although it resulted from an accident, he was able to finish 7th in the 9-car competition. Hinoi came home 8th in the first pro race and then 7th in the second.

MZRacing spoke to both drivers after the races finished. Officially a senior specialist of vehicle development and proving grounds, Masahiro Sato is one of only 4 Mazda in-house top guns. He mostly teaches driving to younger test drivers, executive officers, engineers and so on. He stated, “Test drivers must be able to drive like regular customers do. However, I also think that it is essential they are able to perceive a .1 second difference in driving during a race. If I was to be totally honest I would love to have the opportunity to drive in things such as Toyota’s Nurburgring challenge, or in the machines Ferrari have developed through F1. Although the realness and fear of actual racing are the first things you feel, the more you drive the more you are able to perceive and I’m sure I will be able to capitalize on these experiences in the future.”

Hinoi energetically commented, “I will also be able to compete in another series’ race at Okayama this year, so I’m able to enjoy a serious competition for the first time in a while. I love Mazda and this is my home turf, so I took on this challenge without a moment’s hesitation. We weren’t able to test the car enough before the opening round so I want to improve both my time and placing in the next race.”