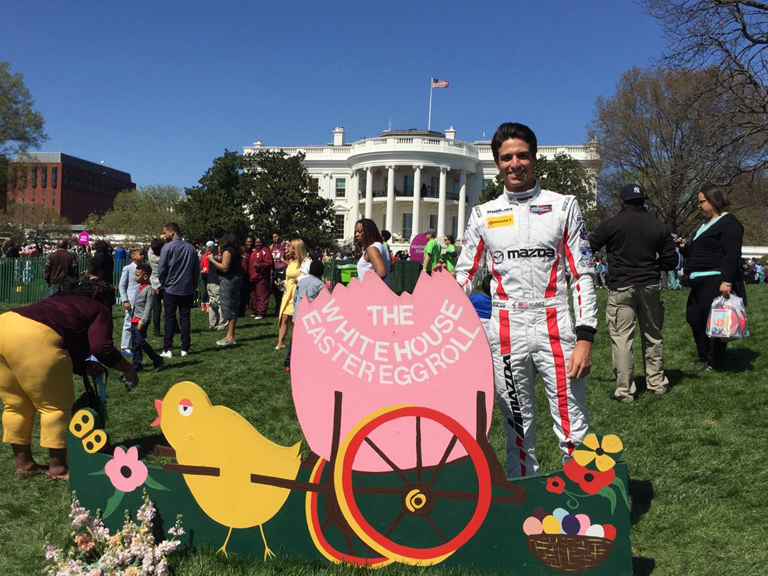 This year Mazda Prototype racer, Tristan Nunez took part in the 138th annual White House Easter Egg Roll. The theme of this year’s event was the “Let’s Move” campaign, an initiative to encourage young people to lead a healthier and more active lifestyle. This campaign is the brainchild of First Lady, Michelle Obama and Nunez could be seen on the White House lawn sporting his Mazda racing suit.

Shortly after the event, Nunez stated, “It was my second time at the White House. I thought it was a once-in-a-lifetime opportunity, but I guess it’s twice now… It was a huge honor to be invited back again. I’m kind of speechless right now. It was a pretty cool experience.” As a 16-year old Nunez started the “Dnt txt n drV Foundation” and it was this that led to his first visit to the White House.

“I got to go inside to the Blue Room,” he said. “It was pretty unbelievable, I got to meet the First Lady and give her a big hug. It was an awesome experience.”

A number of celebrity guests turned out for the event including Jay Z and Beyonce with their daughter Blue Ivy, Tony-winning singer Idina Menzel and a number of professional and amateur stars from a wide array of sports. Nunez was the only individual invited from the motorsports field.

“We got to play with the kids a lot on the lawn as part of the active physical education. It was great to have an up-close-and-personal relationship with so many kids on the White House grounds. Pretty dang cool to see the smiles on their faces. I was grouped with some NFL football players, like Tress Way [of the Washington NFL team], and it’s just a huge honor all around to meet them.”

Nunez will next compete as a member of the Mazda Motorsports team in the IMSA WeatherTech SportsCar Championship race to be held in Long Beach, California from April 16th (Sat).