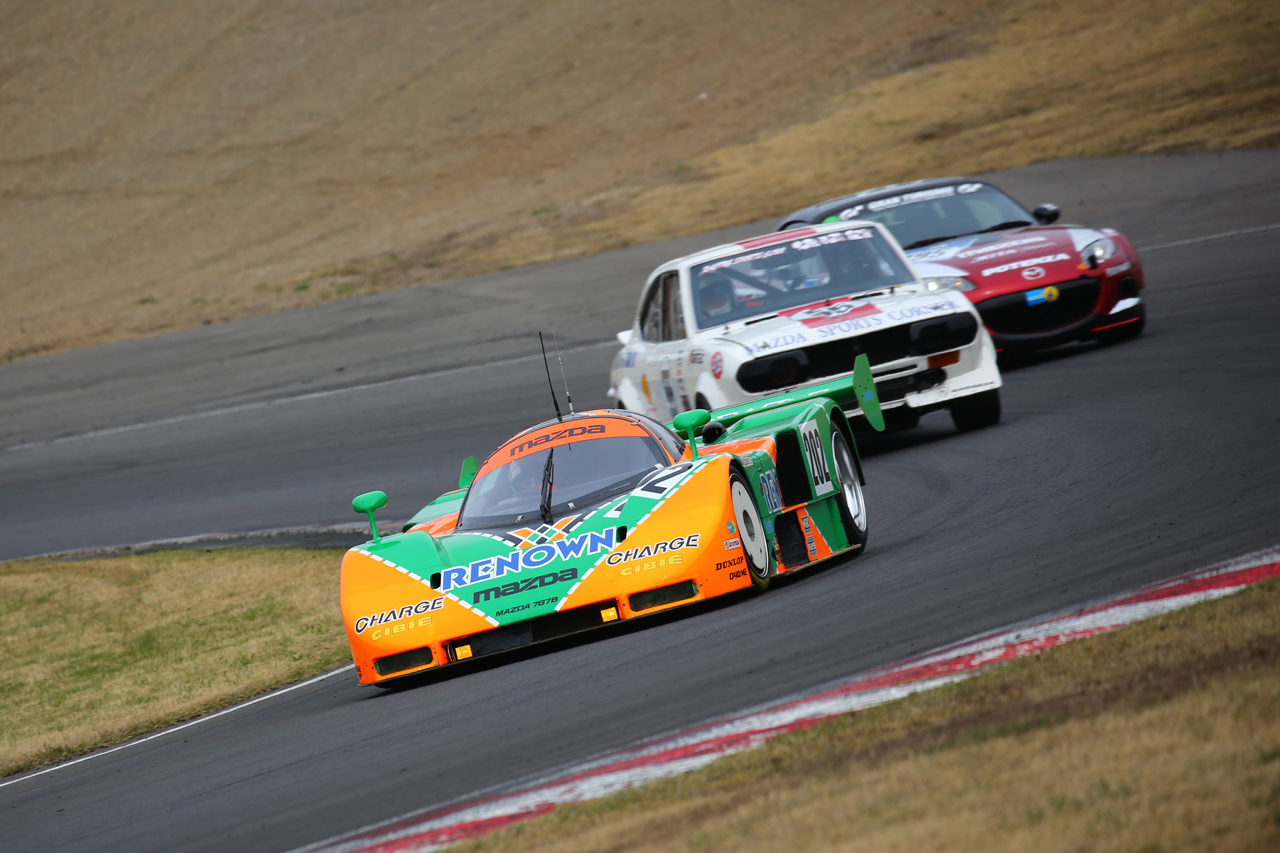 As the temperature had risen on the previous day, the cherry blossoms were in full bloom around Sportsland SUGO, creating a spectacular arc of cherry blossoms for the festival. Numerous events were held on the international racing course, including an exclusive RX-8 time-attack from Racing Team Eightlien and trial races for series such as the Mazda Fan Circuit Trial. In between these there were also qualifying sessions held for series such as the Mazda Fan Endurance and the Party Race III, which is competed with the ND Roadster and recently added a Northern Japan leg to its tournament. Following an event opening declaration, the stage set up in the centre of the paddock gradually enlivened the crowd with a “talk stage” with racing driver, Yojiro Terada, a “talk session” with current Super Taikyu racers, a performance from guitarist Hiroaki Tagawa, and so on.

During Terada’s stage time, junior high school and high school students who participated in the “Support our Kids” program (a program that Terada is a part of and that seeks to assist the independence of children affected by the 2011 Tōhoku earthquake and tsunami) took to the stage. Here they related experiences they had during the France-stay program and how it has influenced their dreams for the future. Their words surely had a great impact on all the Mazda fans present. In the Mazda tent set up beside the stage, vehicles such as the Demio 15MB, Roadster NR-A, and Global MX-5 Cup Car were on display. Along with that, the customary “Monozukuri (“craftsmanship”) Exhibition” put on by the Mazda Engineering Division gave Mazda car owners the rare chance to hear the engineers talk about the dedication and commitment they put into their manufacturing. It appears that fans have begun calling this the “meet the engineers” corner. Here participants were able to hand polish metal plates engraved with the event name and they experienced making them into key chains. It was quite a sight seeing numerous fans intently polishing these plates.

Following a circuit parade run carried out by Mazda Owner’s Club cars, it finally became time for the long awaited demo runs. As prior to the event it had been announced that the Mazda 787 JSPC spec would be running, surely more than a few of the fans who came out from around the Tohoku area had come specifically to see this car. In addition, Terada drove a replica of the Capella Rotary that he drove to victory in the Fuji Touring Car race in August 1971. He was joined by a replica of the Mazda MX-5 that ran at the 24 Hours of Nurburgring, making it a very rare combination of vehicles on the track. Hearing the 4-rotor sound as it roared around the circuit surrounded by cherry blossoms was an exceptional experience for the fans. The sound of the Capella’s RE was somewhat deeper than that of the 787B but it more than satisfied the crowd with its growl that resonated deep into the bellies of those present. The older fans were sure to be thrilled watching the “Kaze no Capella” that broke the Skyline GT-R’s domination of the podium.

After a rendezvous run by four Super Taikyu machines, the time came for the first official race of the ND Roadster Party Race III. This time 5 cars competed in the series opener. Each of them pulled out a spirited drive behind the wheel of their beloved brand new cars. A notable moment occurred when Team TERRAMOS’s Yuki Kamakura achieved an overwhelming victory. Following this, the Mazda Fan Endurance (“Maz-Tai”), where competitors race for 2 and a half hours without refueling, began. This time around a total of 21 new and old roadsters took part. The Mazda Executive Team also entered the race with an NC Roadster. This team, having polished their racing speed and fuel consumption balance though competing in the Maz-Tai over the last two years, were marking down good times. However, they would ultimately come to a stop at the final corner of the final lap. Yet again, they ran out of gas just before the checkered flag. Beginning from executive officer General Manager of Global Sales & Marketing Div., Yasuhiro Aoyama, all 4 drivers expressed that they were “pretty disappointed because [they] had been achieving a decent pace.” They went on to say that they intend to “train more and aim to completely finish in the next round at Autopolis.”

The event finale was a parade run from all participants. Over 100 Mazda vehicles took part and these included latest model CX-3s, ND Roadsters, Demios, Axelas, Atenzas, Biantes, along with yesteryear’s FD RX-7, pro-seed drag racing FF Luce RE78s, Sentias, Capellas, Familias, Lantis, AZ-1, Bongo Wagons, and so on. This 100 strong parade made one lap of the circuit as the dusk was approaching and the beaming smiles of the drivers was

The SOK kids also got to enjoy a kart race held on the circuit’s kart course. With the assistance of Mazda Women in Motorsports members, they carried out an approximately 1-hour simulated race. 5th year technical college student, Yuto Hanzawa, who took part in the very first SOK expedition and is aiming to be an engineer in the future, related, “I’ve been obsessed with motorsports ever since I saw the 24-Hours of Le mans. I want to one day make cars that fulfill people’s hopes and dreams like Mazda does.” It was fantastic to see the hopeful faces of these young people. The Mazda Fan Meeting 2016 that saw the paddock filled to the brim with Mazda machines was a huge success. Hope to see you all again next year.