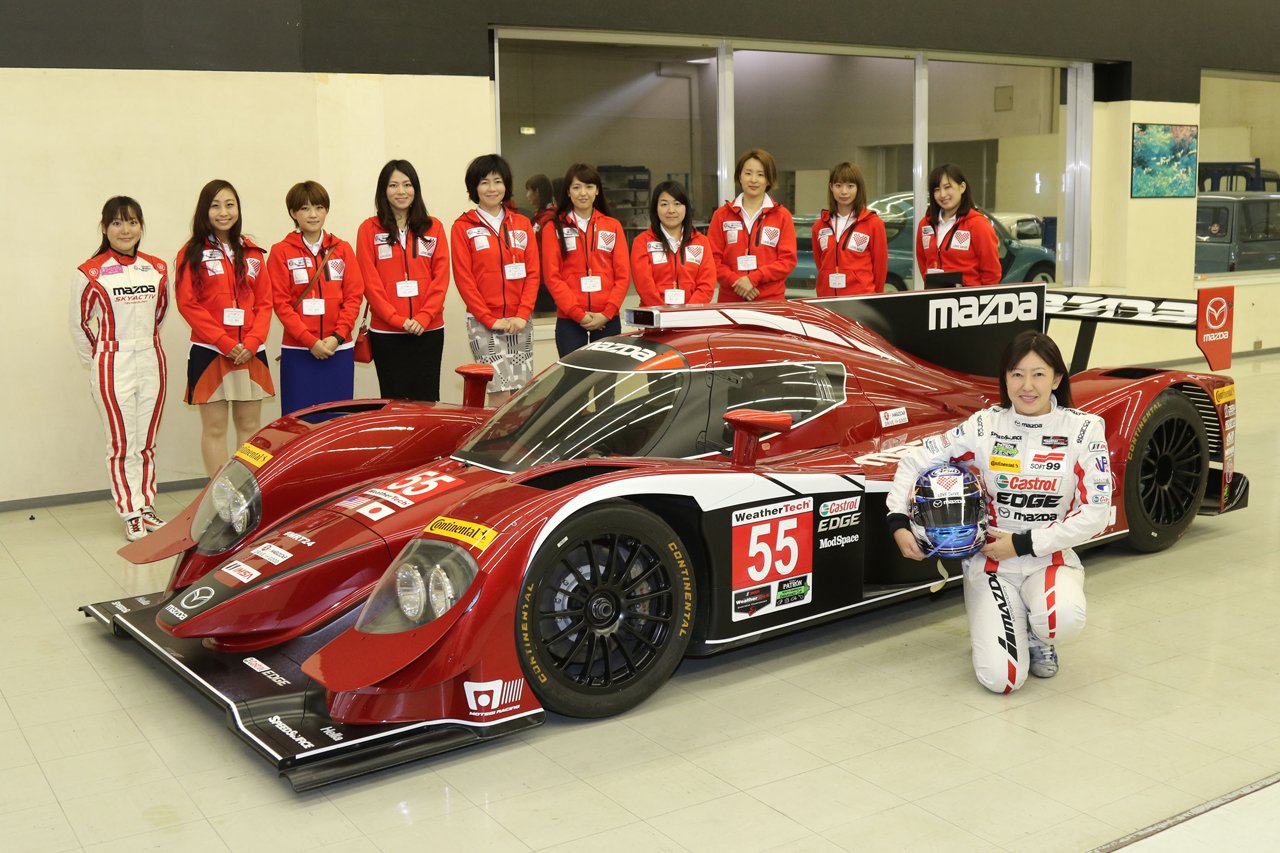 The second phase of the Mazda Women in Motorsport (MWIM) project, headed by project leader, Keiko Ihara, has begun, the details of which were outlined on April 16th (Sat) at Motorsport Japan 2016 held at Odaiba, Tokyo.

The day before the announcement the new project members attended an opening ceremony held at the Mazda R&D Center Yokohama where they received a lecture from Ihara that included an overview of Mazda. Right from the outset Ihara stated, “This is the second year of this program, which will be quite intense in order to foster serious female drivers who will be able to compete in races around the world. For that reason, this year’s driver framework will be restricted to a select few and you will be trained in skills that would allow you to become involved in all aspects of motorsports.” The 9 members of this second class of MWIM, who were selected through a screening commission in March, were then introduced. The 5 selected to be drivers came from a wide range of backgrounds, such as a former lawyer, a college student who began gymkhana through the influence of her father, a star driver from the drift world, a current university automobile club driver, a former equestrian athlete, etc. Those that will enter the study frame include an acupuncture masseur who studies how to improve the physical condition of drivers, a nutritionist who would like to support drivers, a woman who seeks to become involved in motorsports management and marketing and a regular worker who would like to become a racing mechanic. Through their self-introductions, the passions and ambition of these women who will be participating in this project was clearly conveyed. One member stated, “I want to carve my name into the history of motorsports,” while another said, “I hope Ms Ihara will become my springboard,” and another, “I want to become the fastest female driver in the world.”

On the 16th at Motorsports Japan 2016, the 9 MWIM members introduced themselves to the assembled media reporters. They went on to give clear speeches regarding their distinguishing characteristics and goals that they had rehearsed the day before. Ihara also added, “The medium-term three-year goal of this project is to bring up female drivers who will be able to compete around the world. In order to achieve this, individuals will be chosen from amongst this, as well as last year’s group and be entered into Maz-Tai, Roadster Party Race, and Super Taikyu races.” The 9 members then beamed bright smiles as they bathed in camera flashes.

In Mazda’s stand at Motorsports Japan 2016, numerous participatory motorsports spec vehicles that exemplify Mazda’s “Be a Driver” philosophy, were on display. These included a base model Demio 15MB, Roadster NR-A and three Global MX-5 Cup Cars, the series of which begins from this year. Along with this, videos were screened featuring the Mazda Prototype running at the IMSA WeatherTech SportsCar Champioship’s 12 Hours of Sebring and 24 Hours of Daytona, while Mazda brand goods were being sold. A “Legends of Mazda” corner was also established at the centre promenade adjacent to Odaiba’s “Daiba City.” On display here was the Mazda 787B JSPC spec, the Knight Sports RX-8 that competed in the Macau GP, the Mazda R100 Rotary Coupe that made an expedition to Spa-Francorchamps last autumn, the Savanna RX-3 race car spec that caused a whirlwind in domestic touring car races in the ‘70s, a Cosmo Sport, and SA22C Savanna RX-7 that competed in the WRC Monte Carlo Rally. Older Mazda fans were spellbound by the site. These classic cars were surrounded by sporty Mazda machines such as the Mazda R360 Coupe, Capella Rotary, FC3S RX-7, FD3S RX-7, RX-8s, Eunos Cosmo, and so on. Each of these were road cars driven by successive generations of Mazda enthusiasts.

A talk show was held at the center promenade in the afternoon on the 16th where Jin Kato, who achieved his Spa Dream last year, former Mazda bigwig Ryuji Kobayakawa and former Mazda contract driver, Yojiro Terada related stories from the early days of Mazda’s motorsports activities. The large crowd of fans who camped out in front of the stage were regaled with their numerous behind-the-scenes stories. After that last year’s and this year’s MWIM members also came out on stage. The center promenade was carpeted with Mazda colors and the Mazda owners were undeniably thrilled.

Unfortunately, due to extremely strong winds, the second day of Motorsports Japan 2016 was called off at 10:00am.