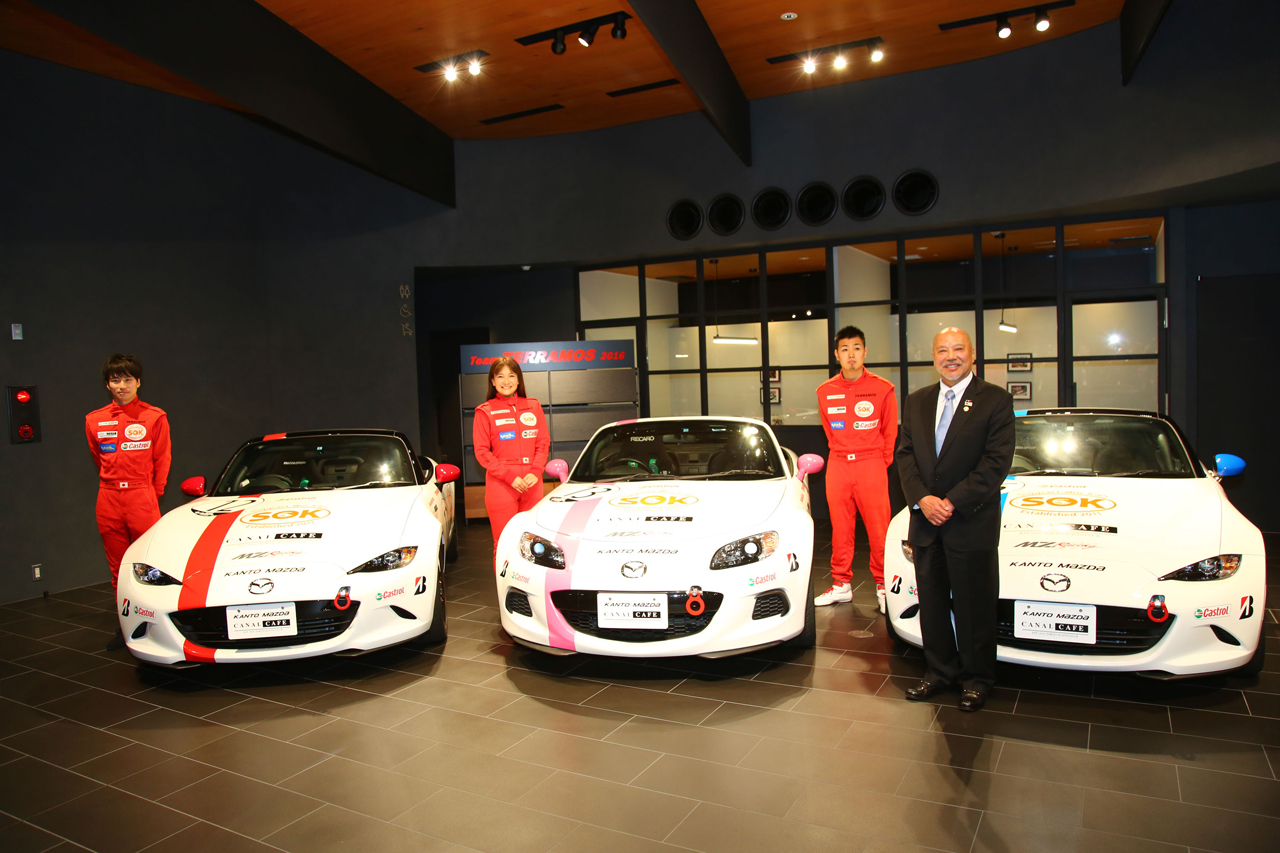 Team TERRAMOS has announced that it will be competing with three drivers, that include female driver, Junko Fujii. Fujii is a new driver who will be making her racing debut this year. Kamakura will be competing in the Northern Japan series behind the wheel of an ND, while Umeda and Fujii will be entering the East Japan series in an ND and NC respectively. Kamakura and Umeda will be competing in a special round held at Fuji Speedway on September 25th and a national championship race held at Okayama International Circuit on December 3rd. The two will be aiming to take away the titles in both series.

During the announcement, each driver expressed their determination. Umeda stated, “I’ve been interested in racing and cars ever since I was a kid and I’ve enjoyed driving Mazdas, but for a long time it didn’t translate into any opportunities. Last year my luck changed and I was able to participate in the Party Race under Terada. I was able to walk away with a 2nd in the rankings but it was a little disappointing so this year I will do my best to take home the championship.”

Fujii said, “I met some people from TERRAMOS when I went to a Kanto Mazda event and that led to me joining the team. I have experience driving on circuits, but I’m a race novice so I hope everyone will enjoy watching me as I develop. I’ll be driving in a Roadster that has pink colouring. I hope that female drivers, as well as the racing industry in general, continue to prosper.”

Kamakura followed up, “I met Mr Terada by chance after I did some sports driving at Fuji Speedway and we discussed racing, which led to where I am today. Last year our car wasn’t quite ready in time and I began competing from the middle of the season, eventually finishing 6th. This year I will be undertaking full participation so I will have no excuses. I’ll definitely be aiming to be the series champion.”

Team Principal, Terada related, “The Party Race is a participatory motorsports event which allows people to not only exemplify Mazda’s “Be a Driver” principle on the road but also on the circuit. Also, the fact that all cars compete under equal conditions, means that the races are won through ability alone. I’ve raced in numerous categories over my lifetime and I think that this is the best introductory category for building up the abilities of young drivers. Not only this, the next step up from this will be the Global MX-5 Cup and then, potentially, even participation in Mazda prototype racing, making it a program that could fulfil some young people’s dreams. I want to enliven the motorsports stage for young drivers as they compete in this Mazda program where they can aim to become professional drivers through these introductory races. I not only want to raise fast drivers, but also develop well rounded individuals who exemplify true sportsmanship and etiquette.”

All three cars will be affixed with the “Support Our Kids” (SOK- a program that seeks to assist the independence of children affected by the 2011 Tōhoku earthquake and tsunami) logo and SOK executive director, Akisawa expressed his appreciation. These three cars will not only carry the young drivers, but also the dreams of these children. We will be following them throughout the year and uploading race reports as they happen. Stay tuned.