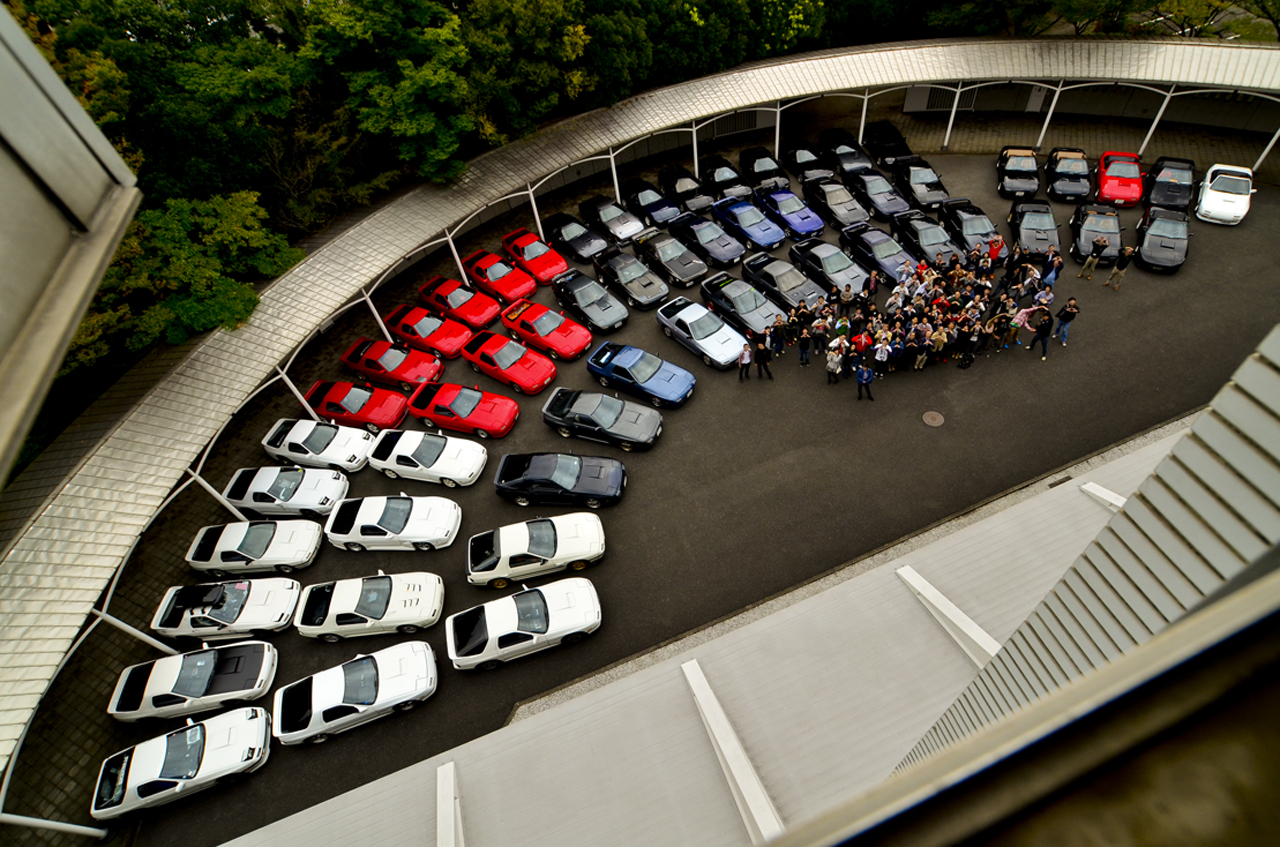 A gathering was held on October 16th (Sun) at the Mazda R&D Center Yokohama to commemorate the 30th anniversary of the FC3S / C Mazda RX-7, which was first released in 1985.

Dubbed the “FC SAVANNA RX-7 30th Anniversary Meeting in Mazda R&D Yokohama,” 50 FC3S coupes and FC3C convertible owners were invited to take part and former FC development chief and current motorsports journalist, Ryuji Kobayakawa, along with chassis development chief and current Yamaguchi Tokyo University science professor Takao Kijima were the guests of honor. The FC was sold from 1985 to 1992. The FC3S was released in October 1985 and saw the “Winning Limited” edition, which was built to commemorate the 1991 Le Mans victory of the Mazda 787B, and sales ended in October 1991. The FC3C appeared in August 1987, commemorating 20 years of the rotary engine and was on the market until October 1992.

The visitors parked their beloved machines in the shape of a semi-circular open gallery. After they were all aligned the opening ceremony began. After Kobayakawa and Kijima were introduced a group photo was taken with all of the owners and their cars. The spectacular scene of early and later generation FCs sporting number plates from all over Japan was a sight to behold.

After that, the event moved indoors and throughout the rest of the morning Kobayakawa spoke about the development of the Infini series and the planning of the convertible. Then in the afternoon Kijima spoke about the chassis, the symbolic layout of the suspension and so on.

After each speech a Q&A session was held. Holding true to intention of this meeting to provide “a handful of people with the opportunity to really hold deep discussions” the owners who turned out fired off meaningful questions and both guests endeavored to answer them all sincerely. One truly got the sense that they truly wanted these owners to continue to cherish their beloved cars now and into the future.

A surprise occurred when two birthday cakes appeared on the stage, one with FC3C written on its surface was placed in front of Kobayakawa, while another with FC3S was placed by Kijima and all together everyone sang the happy birthday song.

After an autograph session was completed everyone went back out to the car gallery. From then on Kobayakawa and Kijima chatted amongst the owners who spoke about various topics such as difficulty with maintenance or the particulars of their customization. Both guests of honor enthusiastically took part in the conversations and it really was an amazing experience for all those who took part.

30 years since it was first released and 24 years since sales ended. While there were participants who had continued to purchase these cars right from the first iteration, there were also a large number present in their mid 20s to 30s who were only kids when the car was released and there were even some who hadn’t even been born at the time. The older owners spoke of “the impact when the FC was first released,” “how cool it looked on TV commercials” and how “it stood out in the magazines.” The young people on the other hand spoke about how they came to be owners, relating “I always wanted an RX-7 from when I was a kid,” and “there’s just something special about owning a rotary engine car.” It really was fantastic to hear a young driver say, “I only really learned about it when I first got my license and from then on the RX-7 was all I wanted.”