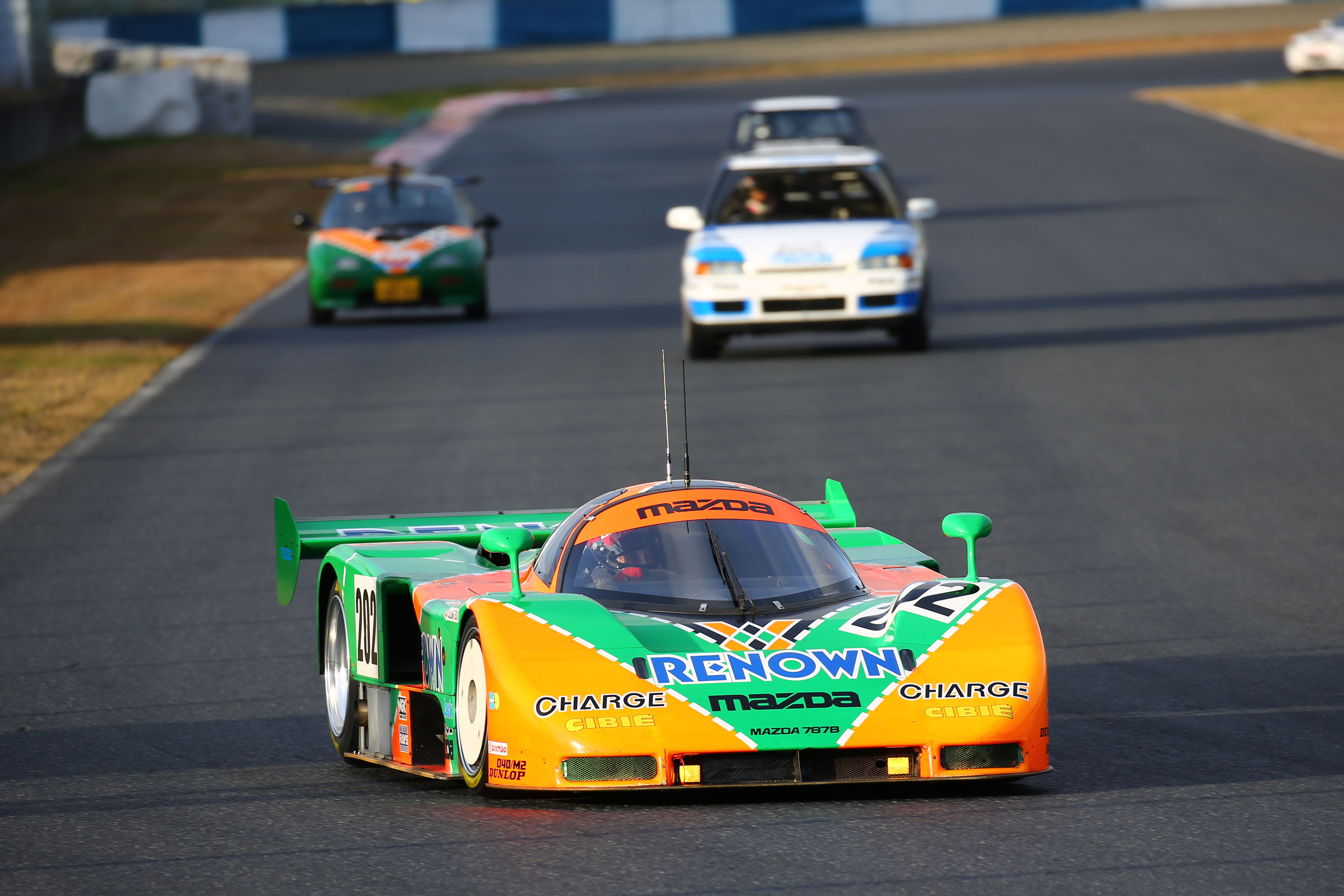 On December 6th (Sun) one of Japan’s largest celebrations of Mazda Motor sports fans, the ”Mazda Fan Festa 2015 in Okayama” was held at Okayama International Circuit. This is the fourth time the festival has been held since the inaugural event in 2012.

With a line up that included vehicles that participate in various race series, legend cars that were set to perform demo runs, S-Tai machines, All Japan Rally cars, owners’ vehicles that participated in the “my car parade,” and so on, over 400 Mazda machines turned out for the event. Despite being held in December the venue was greeted with mild weather and a record number of visitors that exceeded 4,800 people.

The centerpiece of the exhibition vehicles was a 1/1 model of the virtual racecar, the “Mazda LM55 Vision Gran Turismo.” This was the car that was displayed at the top of the 40-meters tall center monument at the “Goodwood Festival of Speed” held in the UK in June of this year. When observed closely it is clear that this car has a beautiful form that incorporates the KODO: Soul of Motion design and elements of the most modern sports prototypes.

On the stage set up within the paddock an “MZRacing Presents – Special Talk Show” was held. In the first part of the talk show every driver that competed in the Super Taikyu, including Toshihiko and Tatsuya Nogami, Tatsuya Tanikawa, Hiroyuki Murakami, Teruaki Kato and Yui Tsutsumi took to the stage. They were joined by Koichi Okada, who took class champion in the JN-3 class of the All Japan Rally Championship behind the wheel of a Demio, Yasuo Matsuda, who took JN-1 class victory driving an RX-8, Tadashi Kawakita, the All Japan Gymkhana SA-2 class champion who drove an FD3S RX-7, along with Yohei Omata who came 2nd in the N-2 class of the same series also driving an FD3S RX-7. The stories that these drivers related of their trials, tribulations and successes enthralled the crowd. In the second part of the talk-show, Jin Kato, whose 45 year dream of driving at the Spa-Francorchamps in a Mazda R100 Rotary Coupe (Familia Rotary Coupe) came to fruition this year at the “Spa Masters 70s Celebration”, related a report on his participation in the race. Following on from this, Yojiro Terada spoke in the “50th Anniversary of Racing Talk Show” where this affectionately named “Mr Le Mans” recounted stories from his 29 times of competing at the famous French track. When he mentioned that he intends to make it 30 times, there were loud cheers of encouragement from the crowd.

When the “Mazda 787B #202” began warming up for the main event, the Legend Machine Demo Runs, the pits began to be filled with enthusiastic fans. The 3-rotor sound of the GC machine, the “Roller T88 / 40 88Q Mazda,” that participated for the first time, followed behind the 787B. To their rear were six RX-3s, that included two Mazda Auto Tokyo / MSCC spec Savanna RX-3s that honor Terada’s 50th year as a racer, and they ran alongside some Skyline GT-Rs. On top of this, legend machines, beginning from Kato’s Mazda R100 Rotary Coupe, the Cosmo Sport, the SA22C Savanna RX-7, the Mazda 323 WRC spec, and so on, ran on the course and were joined in formation by currently active racing machines that really worked the crowd into a frenzy.

The Mazda Fan Festa was originally an expansion of Japan’s only JAF certified time attack competition, the exclusively Mazda vehicle competed “Mazda Fan Circuit Trial” (MFCT). This time around saw approximately 60 cars compete and vehicles in every class were recording impressive times. Along with this the Mazda Fan Endurance’s Chugoku round was held and saw 52 cars participate, the most ever for the series. 8 members of the Mazda Women in Motorsports Project competed alongside Mazda employees within the Mazda executives’ team, the general managers’ team and the test drivers’ team. Not only that, various individuals related to Mazda, along with customers, also took part and experienced the joy of driving. Coming out on top of this distinguished line up was the “WW2 Roadster” that displayed outstanding speed and fuel economy to make this their 3rd consecutive victory.

The final event of the day was the parade run in which numerous regular Mazda owners took part and experienced driving on an international racetrack. After it had finished they, and the large number of other Mazda owners who turned out, left the circuit with broad smiles on their faces. We hope to see them all out again next year.