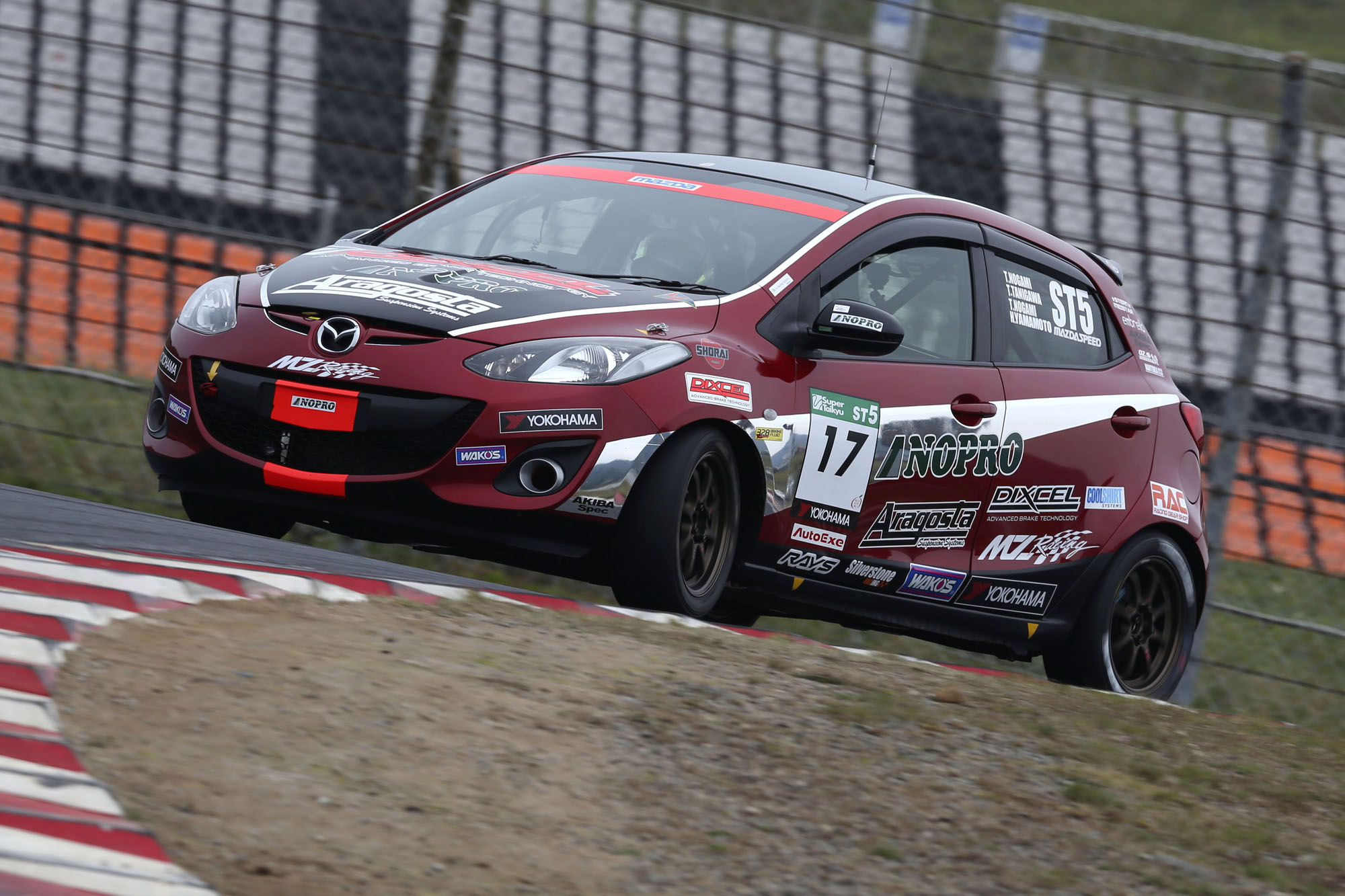 Round 6 (final round) of the Super Taikyu series was held over November 8th-9th at Autopolis, Oita Prefecture where the NOPRO Demio, which went into the race with a chance of moving up from 4th in the ST5 series rankings to 2nd or 3rd, completed the race in 4th place. With this it managed to secure the series 3rd going head-to-head with the formidable Hondas. At the same time, in the ST4 class, the TCR Roadster finished 7th and the Murakami Motors Roadster came home in 8th.

The “NOPRO Demio” (Tatsuya Tanigawa / Nogami Tatsuya / Hiroaki Yamamoto) started the race from 6th place on the grid. Taking the wheel was Tanigawa. Despite the day’s rain letting up through the night, the road’s surface was still semi-wet, even after sunrise, and under these conditions a battle for 3rd unfolded with the 2 fits running in front of the Demio. However, as the road surface began to dry, it met with fierce competition from its rivals and fell to 4th. After racing for about 1 hour they experienced a tire blow which forced them into the pits earlier than planned. Changing tires, refuelling and switching drivers to Yamamoto, they then returned to the course only to re-enter the pits after just one lap to refuel and change to Nogami. This was a cunning strategy aimed at rapidly completing the mandatory number of pits. Although they had dropped down to 5th, when the safety car was dispatched to remove a crashed vehicle and most teams went into the pits, the Demio stayed out behind the pace car and was able to offset its approximately 1-lap difference with relative ease. After the race resumed, it advanced further which put the machine running in 3rd within its sites and it began to engage in a tail-to-nose battle. Unfortunately, there was not enough time before the checkered flag was raised and the Demio finished in 4th.

In the ST4 class the #54 “TCR Roadster” (Teruaki Kato / Tsubasa Kondo / Daisaku Kobayashi) started from 11th with Kobayashi taking the reins and putting in a steady drive before handing the machine over to Kondo and Kato who brought it across the line in 7th. They finished their debut season at 10th in the series. The #88 “Murakami Motors Roadster” (Hiroyuki Murakami / Takeshi Wakiya / Masanobu Oi) began the race from 10th but time lost in the pits due to trouble with their transmission’s oil pump left them finishing the race in 8th and placing 13th in the series.

We’d like to send out a thank you to all the teams for their hard work throughout the season. To all the fans, thank you so much for your support.