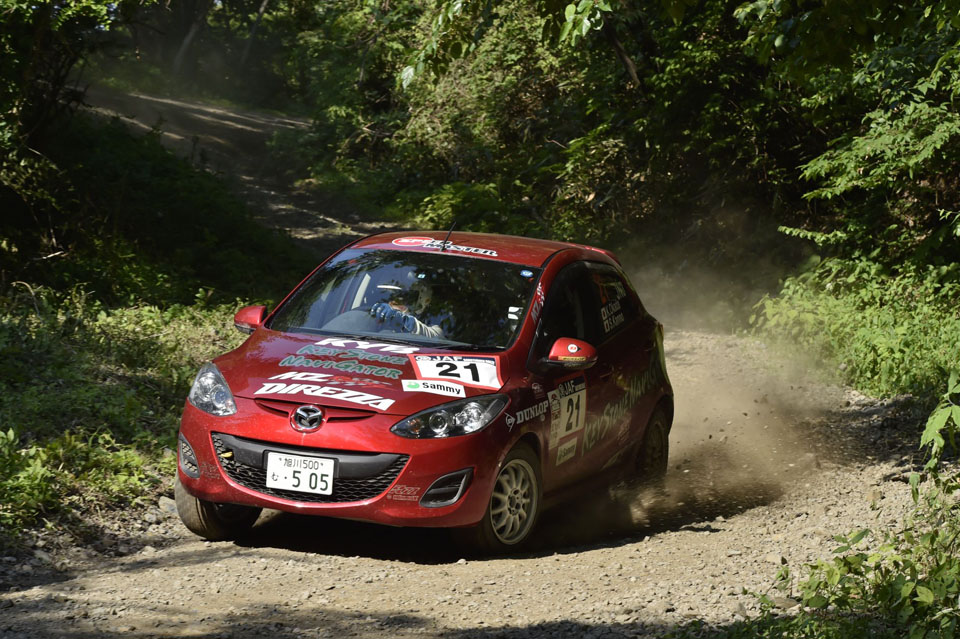 Round 4 of the All Japan Rally, the “Ganbarou! Fukushima MSCC Rally 2016” was the first gravel rally of the season and was held over June 11th to 12th around Tanagura, in Tohoku’s Fukushima Prefecture. Six of the seven vehicles that competed in the JN3 class where Mazdas and the Demio of Shinichiro Karakama / Toshiro Matsuura and that of Koichi Okada / Soichiro Kanno finished 2nd and 3rd respectively. In the JN1 class, which restricts modifications, Hishashi Matsubara / Yoshiaki Wada’s Demio 15MB was able to mark the top times in SS5 and SS10 but ultimately finished in 4th place.

Okada, who is strong on gravel and therefore hoping for a good result, firmly stated, “I’ve allowed the Vitz to come away with a 3 round winning streak. I want to make a comeback from here. I want to demonstrate the speed and power of the Demio in the gravel.” SS1 was the 6.54km “Nishine R.” Shooting out of the blocks was the Karakama Demio. The Vitz of Toshiyuki Amano / Yukiko Inoue followed this up by taking the best time in SS2. The Karakama Demio was just behind with a narrow margin. Okada seemed to struggle to lift his pace. In SS3 the Yukihiro Fujita / Ayako Fujita Demio recorded the top time. Second best went to the Karakama Demio. Unable to hide his satisfaction at grabbing a top time for the first in a while, Fujita related, “I broke our transmission right before the rally so I had to hurriedly replace it with last year’s. Our gear ratio matched the course so we were able to get a good time.” The Okada Demio then took the top honors in the short SS4. At this stage the top group consisted of Karakama in the lead, with Amano 0.6 seconds behind, Okada 20 seconds further back and Fujita 3 seconds to Okada’s rear.

Seemingly unable to keep up with the top two, Okada changed his car’s settings during the 30-minute service time before going back out for section 2. However, in the long 11.06km “Tsuruishizan” SS6 he overshot the mark two times, resulting in impacts to his left front. Fortunately, this did not effect the car’s handling, however returning to the course resulted in significant time loss and he fell back to 41.6 seconds behind the lead. After the end of Day 1, Amano was in the lead with Karakama in 2nd and Okada in 3rd. The difference between 2nd and 3rd at this point was 45 seconds. With the overall distance of day 2 being 19.56km a reversal seemed almost impossible. At the conclusion of Day 1, Okada compared the data collected thus far with the road surface data for Day 2 and decided to significantly alter his machine’s settings.

The 20-minute service carried out early in the morning on Day 2 was where the mechanics showed their mettle. Compared to Day 1, Day 2’s road surface was relatively flat with longer paved sections and a higher average speed so they lowered the Demio’s height. The crew managed to send out the Okada Demio having completed the damper adjustments and alignment corrections in the allotted time. Day 2 started off with the 4.43km “Ryu/Okada R” SS9, which rapidly changed the flow of the rally. Okada was able mark off times 4.9, then 7.3 seconds faster than Karakama, after which he continued to push hard in the remaining SSs, ultimately shrinking the 45 second difference down to 10.4 seconds by the final SS15.

In the final 4.34km “Ru/Okada” SS15, Okada would pull out even sharper corning and aggressive braking, while Karakama, not to be outdone, also displayed a dynamic performance. In the end Karakama recorded a 4 minute, 13.3 seconds, while Okada marked a 4 minute 06.5 seconds. Although Okada was faster in the stage time, Karakama finished in front of him in the overall times by a mere 3.6 seconds. The final results saw the Amano Vitz take 1st, Karakama’s Demio 2nd, and the Okada Demio 3rd.

Okada commented, “I’m pretty disappointed about Day 1. Still, to be able to reduce a 45 second difference down to 3.6 seconds proves that this older Demio still has a lot of fight left in her. I’ve found the areas I will need to work on before the next rally at Toya. There isn’t a whole lot of time before the next round but I will steadily work on these areas before heading out there. I really want to say how impressed I was with Karakama today. Seeing he, along with Fujita and the other Demios pulling out such great performances is fantastic to see.” The next round, Rally Toya will be held over July 2nd to 3rd in Hokkaido.