RX-8, advance into the D1 Best 16 thwarted by bad weather 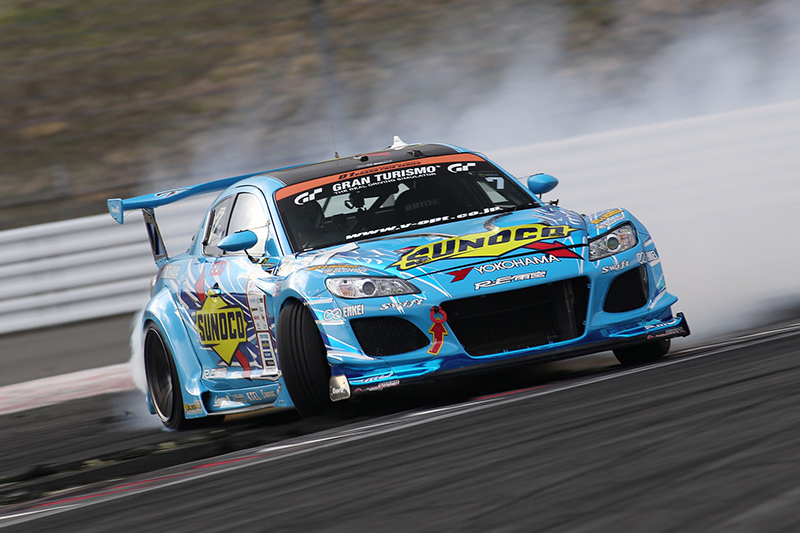 On March 29 and 30, the season opener of the 2014 D1GP season was held at Fuji Speedway. Here, four Mazda RE equipped cars competed.

First, the qualifying tanso (solo) runs held on Saturday the 29th. There were four Mazda cars that entered the race, three RX-7s and one RX-8. However the Yamamoto driven #59 PURISM with ORIGIN Labo (FD3S) failed to take any points, clutch trouble prevented Fujinaka from naturally manoeuvring his three rotor turbo engine equipped #88 APP with YOKOHAMA RX-7 (FD3S) and the #77 EXEDY R Magic D1 Racing driven by Matsui was eliminated due to engine trouble. On the other hand, Masao Suenaga, showing good rhythm within a solid run behind the wheel of his #7 Team RE Amemiya SUNOCO RX-8, will advance to the tsuisou (chasing race) final stage.

To the tanso run final. Suenaga, who flung his car with abandon at the judge’s corner but was deducted points for running too far off the track, stated, “We changed the turbo this season so the car is now much easier to drive. I confirmed the feeling of the engine in pre-tests and so was able to perform a steady run.” Finishing 10th in the tanso run final, he was just unable to make it into the top 8 in order to be exempt from the tsuisou qualifier.

On Sunday 30th, despite rain which began from the morning, Suenaga continued to show consistent performance in the tsuiso qualifier and, after defeating Sakuma (ranked 3rd last year), progressed into the best 16. However, soon after this, the rain and wind intensified making it impossible to continue the tournament and the tsuiso qualifier was aborted halfway through. In accordance with the rules, after taking in the results of the tsuiso qualifier and the ranking he achieved in the tanso qualifying rounds, Suenaga came in 9th overall.