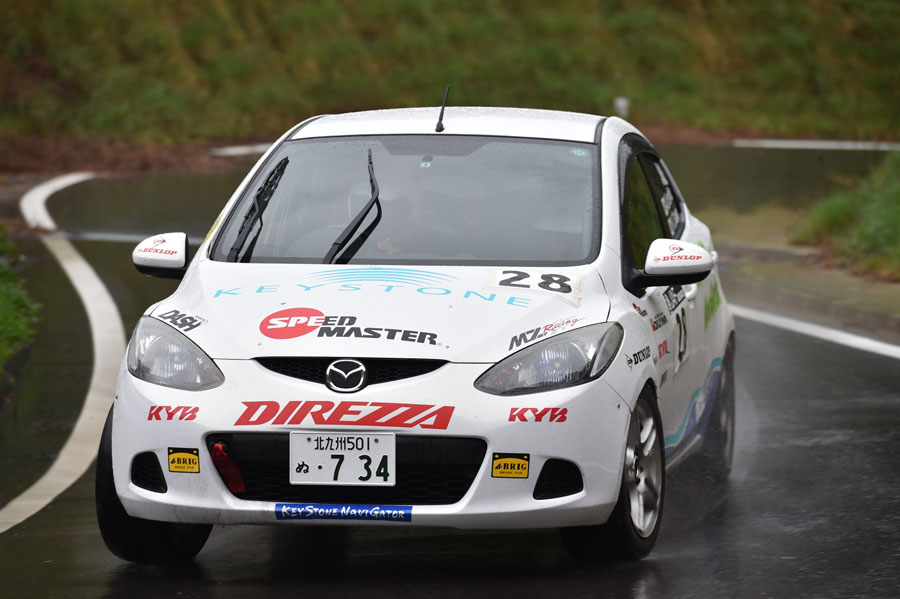 The opening round of the All Japan Rally Championship, the “Tour de Kyushu,” was held over April 11-13 in Karatsu, Saga Prefecture where the Demio of Koichi Okada and Ayumi Urushido took second place in the JN3 class. Further, in the JN1 class, the class with the lowest displacement, the RX-8 of Akinori Nakamura and Satoshi Furukawa came in first followed by the Shunichi Washio/Takashi Suzuki driven RX-8 to accomplish a 1-2 finish.

Beginning from this season the class structures have changed and the 1.5 litre Demio which has been competing in the JN2 class until last season, is now competing in the JN3 class. Despite being very successful last year and the year before, Kitakyushu raised Okada has been unable to take the championship thus far and has sworn to take the title in this year’s tarmac battle with a brand new machine sporting a more aggressive set up. After all the rally participants went to Karatsu shrine to receive the now customary driver’s blessing and hold the ceremonial start under the shrine’s “O-torii”, this full fledged rally was begun. This event was centred on the Karatsu Tokou temporary parking Service Park and, having blocked the roads from general traffic, the competition was held over a total of 311km which included 16 sections of time attack Special Stages (competition sections) of about 69km.

Okada started enthusiastically in the Demio but from Day 1 last year’s number 2 Vitz began to pull away from him and he eventually finished with a 1 minute 18 second difference. Okada said, “This year we put serious efforts into weight reduction through things such as renewing the roll cage and I think our competitiveness has seriously improved. However, we were only able to take stage best once and after that we were outdone by Amano’s Vitz. That said, we took away a lot of good hints for tarmac strategies and in the next asphalt rally I think we will be able to carry out an unbeatable drive. Next is the Kumakogen rally in Ehime. I’m looking forward to the first gravel rally of the season.” I think this season we will want to also focus on the JN1 class in which the RX-8s achieved a 1-2 finish.