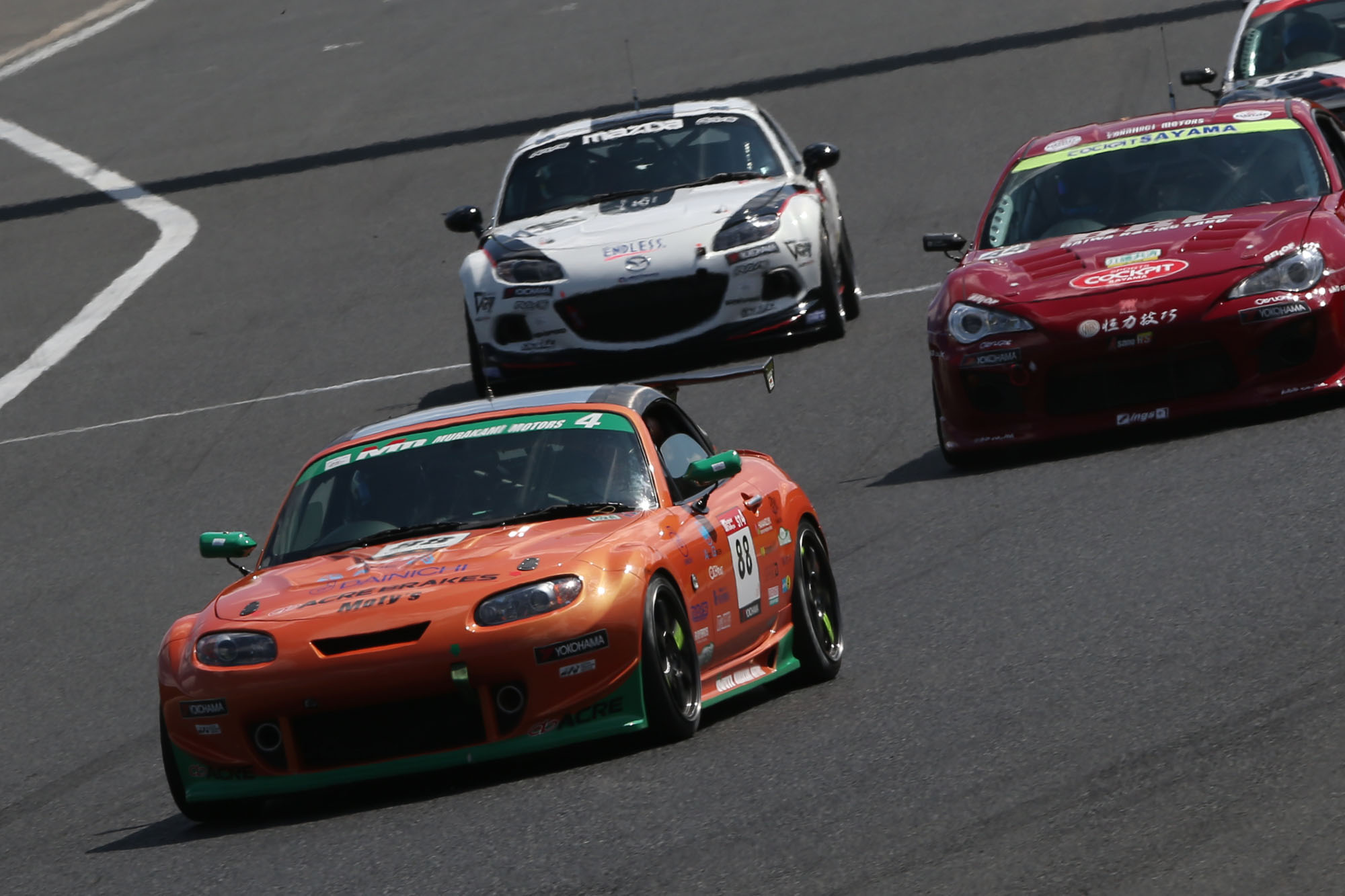 Round 4 of the Super Taikyu series was held over September 6th-7th at Okayama International Circuit. Here, in the ST-4 class, the Murasaki Motors Roadster came 8th and the TCR Roadster finished 9th while, in the ST5 class, the NOPRO Demio, despite running in 3rd at the closing stages of the race, unfortunately made contact with a vehicle from a different class and was forced to retire.

In the previous round the Demios finished outside of the points sphere. This time around the ST4 class #88 “Murakami Motors Roadster” (Hiroyuki Murakami / Takeshi Wakiya / TOMISAN) was at its home course of Okayama and Murakami stepped up right from qualification. In the A driver’s qualification sessions he carried out a fierce battle for 8th place and recorded times that were coming close to the ST4 class Hondas.

In the final race the #88, along with the #54 “TCR Roadster” (Teruaki Kato / Tsubasa Kondo / Daisaku Kobayashi), fell back a few places due to the faster top speed of rival machines, and were around 10-15 seconds behind the top order. Despite this the two Roadsters carried out an intense battle between themselves with the positions being reversed at one point due to fast pit work. After steadily wracking up laps the two cars finished in the point sphere at 8th and 9th due to a few leading cars dropping out of the race.

In the ST5 class, the “DIXCEL Aragosta – NOPRO Demio” (Toshihiko Nogami / Tatsuya Tanigawa / Tatsuya Nogami ) started from a 6th place qualification with Tanigawa behind the wheel. Immediately after the race began he was running in 5th behind the 4 formiddable Fits. Taking over for the middle stint, Tatsuya Nogami went all out and moved up to 4th place when a Fit 3 fell out of the competition. Tanigawa would once again take the reins for the last stint and, at a pace of about 2 seconds a lap, gradually began to close the gap with the Fit 2 running in 3rd. 2 laps before the checkered flag, he overtook the Fit 2 to raise them up one position. However, directly after this, while cornering at the double hairpin, another class’ vehicle lost control and swerved in front of the Demio. With no chance to take evasive action it ended in a T-bone crash which left the Demio with significant damage and Tanigawa with injuries to various parts of his body including his collarbone. The Demio was forced to retire and Tanigawa taken to the hospital to receive treatment where he is now making a steady recovery.

Even though retiring in this race is disappointing for the #17 Demio, they have retained their 2nd place on the point rankings and still have a chance in the fight for the championship.