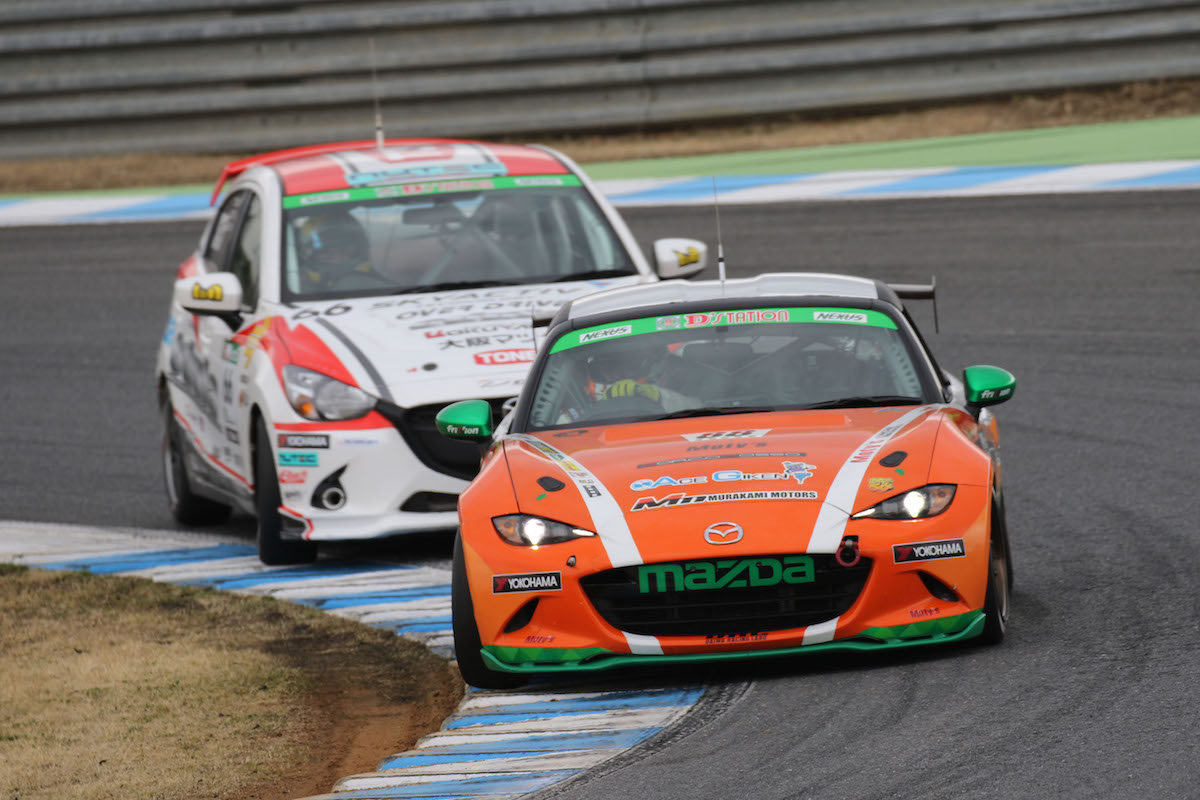 This year there are as many as eight teams competing in the S-Tai with Mazda machines. These included the Axela SKY-D that debuted in the ST-3 class, and the TC CORSE Roadster (Teruaki Kato / Yui Tsutsumi) that is competing in the ST-4 class for the fourth year in a row. In the ST-5 class the Murakami Motors Roadster was joined by the NOPRO Demio SKY-D (Yutaka Seki / Takeshi Umeda / Kaoru Ijiri), the odula Demio 15MB (Takashi Hashimoto / Ryuichiro Otsuka / Takayuki Takechi), the all female LOVE DRIVE RACING Roadster (Marie Iwaoka / Enami Kitahira / Hiroko Komatsu), the TEAM 221 Roadster (Katsuhiko Tsutsui / Junichiro Yamashita / Hideshi  Matsuda) and the Nissoku Roadster (Akihiro Harashima / Tatsuya Okahara / Akihime Iinuma). This meant a 4-car increase in competing ND Roadsters and the powerful Mazda presence caught more than a few eyes.

The Group 2 race rolling start began at 1:50pm on Saturday under fairly chilly conditions of 7°C. The Honda Fits occupied the top grid positions but the Murakami Roadster that began from 6th immediately shot out of the blocks and plunged into the first corner after which starting driver, Murakami gradually reduced the gap with the leading cars. From then on Wakiya maintained this high pace and, with a few rivals in front dropping back, they climbed up to 3rd. With 40 minutes remaining they carried out a final driver change. Although for a time they were closing in on their rival in 2nd, they couldn’t forget the need to preserve fuel and so they drove at a conservative but steady pace until the checkered flag. Starting behind the wheel for the NOPRO Demio SKY-D, veteran, Seki and rookie driver, Umeda, displayed solid driving and finished in 5th. The Odula Demio 15MB was unfortunately hit with penalties for violations that occurred during both pit stops but was still able to finish in 6th to gain essential points. Following behind in 7th and 8th was the TEAM 221 Roadster and Nissoku Roadster, a solid finish for these newcomers. Unfortunately, the LOVE DRIVE RACING Roadster was forced to retire due to driveline issues.

Sunday was met with fine weather and the Group 1 race was held under bright, warm sunshine. The NOPRO Axela, which until the previous day was not able to perform as hoped due to issues with its control system, started from the tail end and ticked off laps at times that did not reflect the car’s potential. Starting driver, Tanigawa drove for two hours before handing the wheel over to Tatsuya Nogami, who ran for 60 minutes. Finally, the baton was passed to Toshihiko Nogami who passed the checkered flag for the 200-minute race. Team representative, Nogami stated, “The car is still not a whole lot different from a road car. However, we learned a lot of things in this race appearance and there are a lot of steps we will be able to take before the next race. We will be able to run faster at the next round at Sugo and there are a lot of modifications left to us, including further weight reduction. Please keep an eye on us in the following rounds.” In the ST-4 class the TC CORSE Roadster, which has had a hard time at Motegi, put in a solid 7th place qualifying run and in the race was proving to be a force to be reckoned with, briefly running in 3rd place. However, driveline issues later in the race saw them gradually lose pace. They ultimately finished the race in 6th.