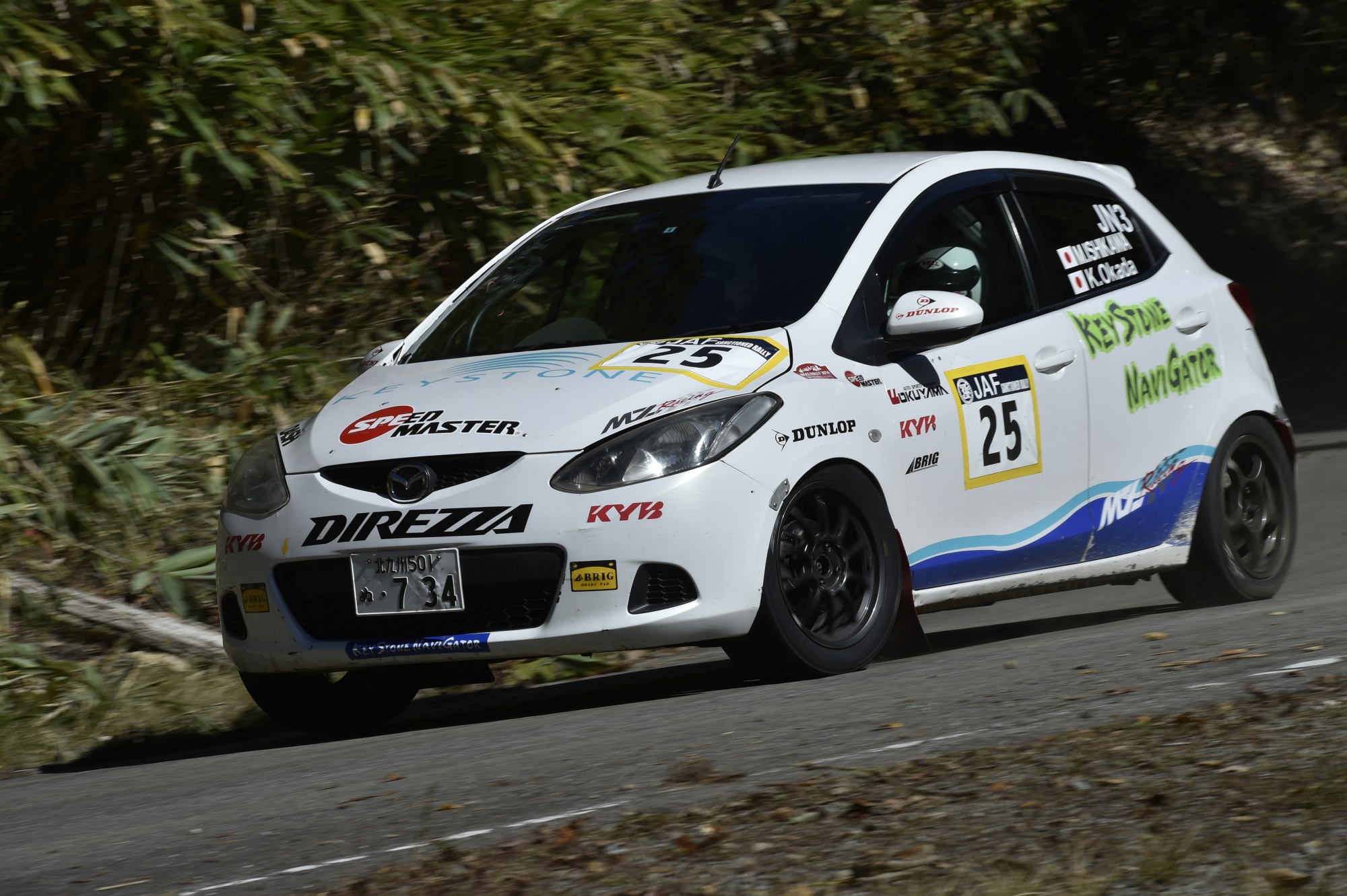 The All Japan Rally Championship’s MCSC Highland Masters was held over October 19th-20th on the mountain passes around Takayama, Gifu Prefecture. Here Koichi Okada, driving his Mazda Demio, grabbed his first victory of the season in the JN3 class while Akinori Nakamura’s Mazda RX-8 took top honors in the JN1. Although Nakamura has unfortunately missed a chance at taking the championship, having decided to only compete at tarmac rallies this season, he has still come away with victories in all three of the events he has participated in.

The renowned MCSC Highland Masters was contested on a battleground that consisted of 10 special stages (6 on day one and 4 on day two) with a total length of 69.82km. After taking his first JN3 victory of the season Okada said, “I’m sorry to have kept everyone waiting so long. We’ve got our first win of the season! From about round 5 we began to sort out various issues and the podium started to come into sight. We revised our machine’s specs, the tires, our pace notes. This time everything went perfectly. I was able to attack the whole rally without trouble. I’d really like to thank the mechanics that put together an amazing machine that I could push with total confidence. I’d also like to thank everyone who worked so hard in the service area. This time there were two sprightly young Vitz drivers competing in addition to all the regular drivers so it was a great fight. This season we just haven’t been able to meet our supporters’ expectations but we’ve finally been able to grab a win. Thank you so much to everyone who has cheered us on. We’re going to pull out everything we’ve got for next week’s final round and aim for a winning streak.”

Regarding his 3rd consecutive tarmac victory in the JN1, Nakamura commented, “the Highland Masters was the first rally for me to compete in using the RX-8 last year and I was able to take victory then. With portions of the same course being used this year I felt I had a real shot at winning and put everything I had into this. Nakanishi secured the series championship in the last round at Rally Hokkaido so my goal was to be the victor for every tarmac rally in the season and see just how much I could lock horns with the 86/BRZ in the JN5 class. I was confident that as long as I didn’t make any silly mistakes I would be able to secure the first step on the podium in the JN1 class. Although I was able to record times that were closing in on the JN5 class’ top runners, the accident in SS6 cost me around 30 seconds and I ultimately finished an equivalent 4th in class 5. I think I was able to prove the superiority of the RX-8 on tarmac. The final round in Shinshiro is very similar to the first round, with its formidable, consecutive long courses, so I’m going to give it everything I’ve got.