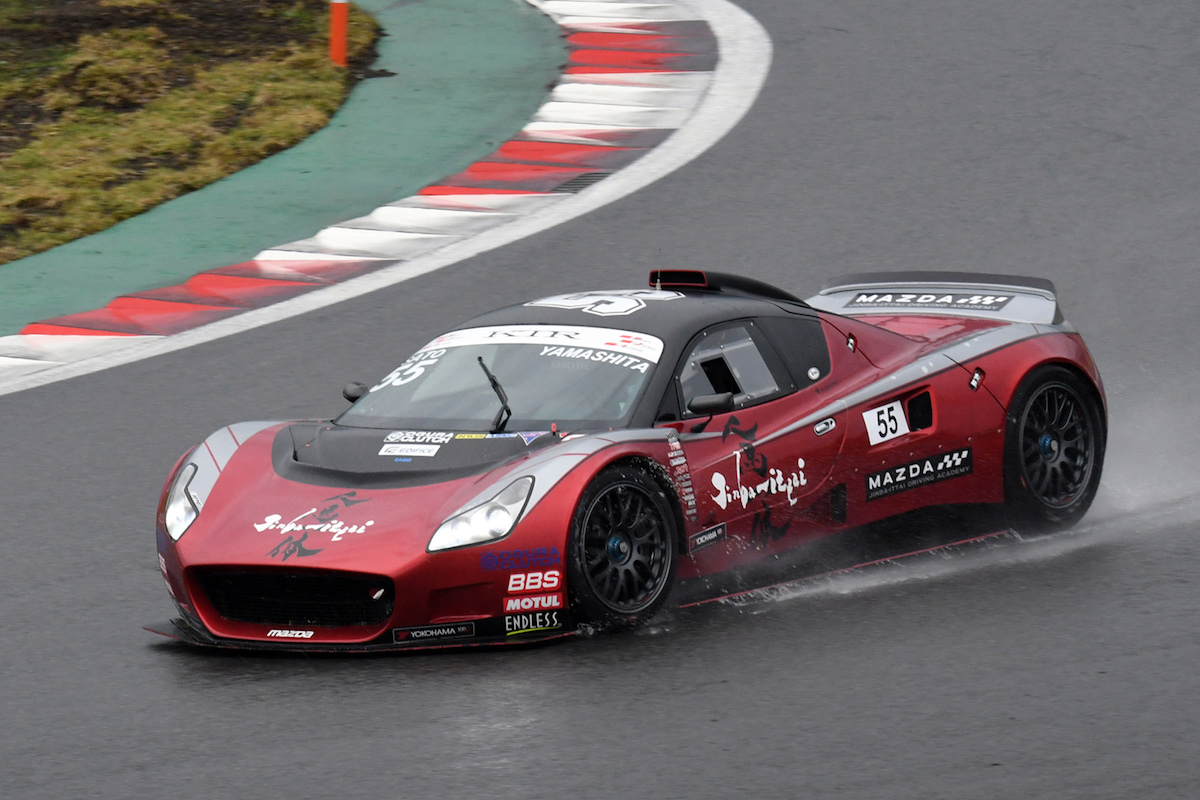 Round 3 of the 2017 Inter Proto Series (IPS) was held over October 28th to 29th at Fuji Speedway where the Mazda entry, the “Jinba Ittai Driving Academy” team’s #55 driven By Masahiro Sato, took Gentleman Class 2nd place in race 5 held on the 28th. This was their first podium finish since the opening round.

Sato is a veritable top gun who stands at the top of Mazda’s in-house test drivers. In this, his second year competing, he is challenging the “expert division” of the Gentleman’s class, which allows him to fight for the overall title. Although he recorded the 2nd fastest times in the qualifying sessions of all previous rounds, after finish 2nd in the opening round, he has had a string of disappointing results with a 7th, 7th, and 5th place in the following races. On top of that, the opening round was ended behind the lead of the safety car due to heavy rain.

Qualifying for the Gentleman’s class was held from 8:45am on the 28th with light rain occasionally falling but leaving the train relatively dry, making it fairly ambiguous conditions. Sato was a little sluggish our of the blocks and his time of 1 minute, 52.128 seconds placed him 4th fastest out of the 10-car group. In the Pro qualifying session that was held immediately after, Yamashita pulled out a blistering attack to record a 1 minute, 45.677 seconds that was a mere 0.458 seconds off the top time of Yuhi Sekiguchi and secured him 2nd place on the grid.

Each team was of two minds when it came to their choice of tire and settings prior to race 5 of the Gentleman’s class that was to start from 1:30pm and initially all lined up on the grid sporting slicks. However, heavy rain began pouring down when the rolling start began and although pole sitter, #19 HAMANO and #55 Sato were set to continue on, the majority of other rivals headed into pit road to change to rain tires. The organizer judged that the situation had become dangerous and decided that the race would be restarted.

Every car changed over to rain tires and when they had all re-aligned on the grid the course was completely wet. The 15 lap race was reduced to 13 laps and would begin behind the lead of the safety car at 1:55pm. After judging the conditions carefully the SC left the course at the end of lap 3 and with this a 10 lap rain soaked battle unfolded that saw numerous cars spin out and go off course at various locations on the track.

Starting from 4th on the grid, Sato was hot on the heels of the top group in the early stages but gradually began to fall back slightly due to poor visibility. However he maintained his position and carried out an error free performance and when the #3 spun out in lap 5 he moved into the podium sphere of 3rd. After this the #32, which had been running in the lead, went off course in the final stages and made contact with the wall and resulted in a mechanical fault. It was then presented with an orange disc flag and forced into the pits, resulting in Sato moving into 2nd in lap 12 and he went on to pass the checkered flag in this position.

Immediately after the finish Sato said, “Although this result was due to more than a little bit of good luck, I’m happy to be standing on the podium.” A smiling Yamashita continued, “It was pretty tough conditions but I was knew he could pass at least one car and get to the podium. If the next race is dry I’m sure he will be able to pull out even further in front.”

The next and final round of the 2017 IPS will be held over December 2nd to 3rd and will consist of race 7 and 8.