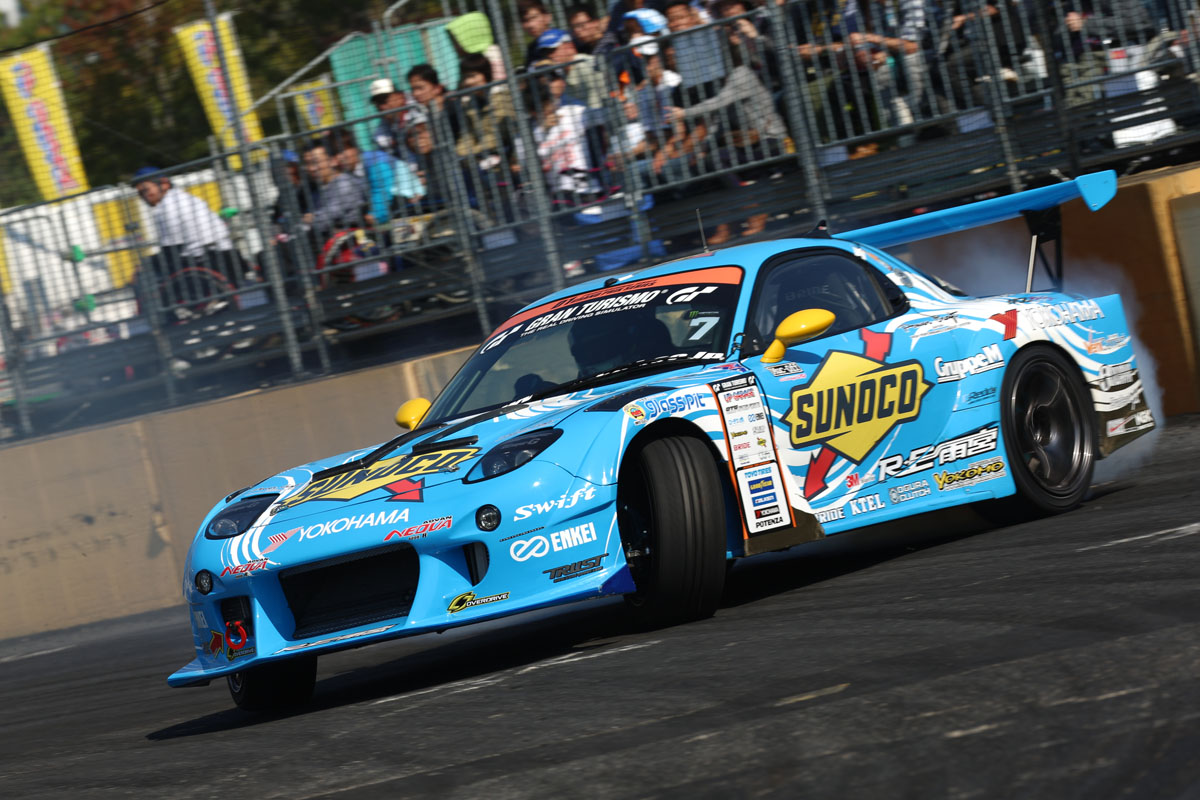 The final round of the D1GP was held over October 17th-18th at the special course in Odaiba, Tokyo where the RX-7 driven by #77 Yukio Matsui of EXEDY R Magic D1 Racing and that of Team RE Amemiya SUNOCO’s #7 Masao Suenaga competed.

Suenaga got off to a great start and grabbed 4th place in the “tanso” (solo run) finals with a drive that achieved a perfect mix of speed and angle. With this he took home the tanso series championship. In the “tsuiso” (chasing race) tournament #77 Matsui displayed aggressive driving and although he advanced to the best 8, he “kind of went a little overboard in [his] haste to take the win” and was eliminated after a push on his opponent, #5 Kenji Takayama. He would finish the races in 6th.

On the other hand #7 Suenaga blitzed the competition with his phenomenal speed to advance to the finals. However, after this he began to suffer from issues with his transmission and he struggled to maintain the performance he had displayed until then. Despite this, his opponent, #1 Masato Kawabata, lost a large number of points when he failed to replicate Suenaga’s driving and made contact. Therefore, partly due to good fortune, Suenaga took home victory.

With the ranking leader, Takahashi, coming 1st in the tsuiso qualifiers, Suenaga wasn’t able to close the gap and attain the series championship. However, coming series 2nd Suenaga looked back on the year and related, “we had a little trouble towards the end but I’ve been so fortunate to be provided with a machine that has been, basically, completely trouble free.”

In the following day’s exhibition match Suenaga continued to have transmission trouble and was forced to retire. #77 Matsui was outdone by #9 Naoto Suenaga in the tsuiso 2nd stage.

With this, the year’s official D1GP competition schedule has come to a close. We can’t wait for the opening of next year’s season!