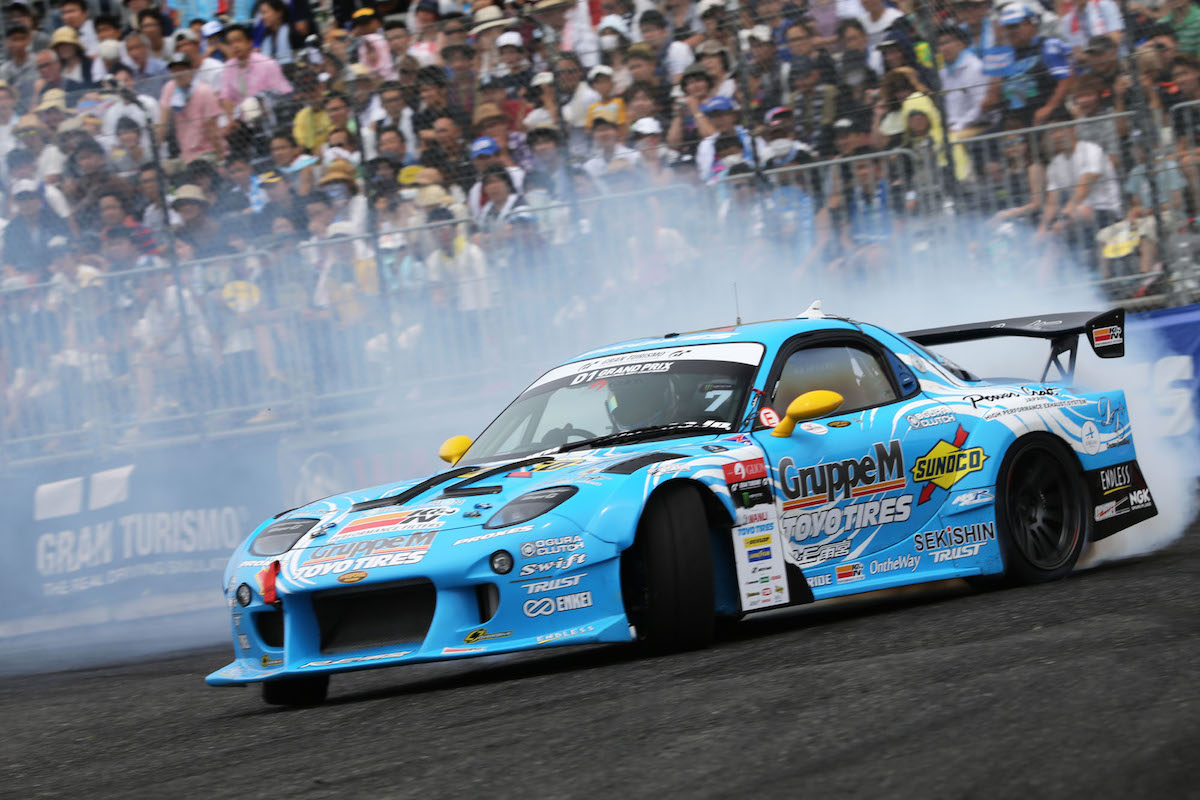 Round 4 of the D1GP was held over July 21st – 22nd at the Maizu special venue, Osaka Prefecture where of the four Mazda vehicles that competed, Yukio Matsui’s Team RE Amemiya GruppeM RX-7 advanced into the final and grabbed 2nd place.

Matsui used the powerful acceleration of the #7 RE Amemiya RX-7 to his advantage and passed through qualifying in 1st place before finishing the tanso (solo run) finals in 3rd. He continued winning right up until the tsuiso finals, where he went up against Naoto Suenaga, who until last year drove alongside him in the same team. Although Matsui continued to display brilliant performances in the final, he was undone by the difference in cornering speed and ultimately finished in 2nd place. Matsui went on to relate, “Everyone in the team knows Suenaga really well and, of course, Mr. Amemiya is also very close with him. I really wanted to win and gave it everything I had but I just couldn’t quite close the gap. I won’t lose in the next round.”

On the other hand, #88 Manabu Fujinaka’s TCP MAGIC RX-7 and #21 Takahiro Imamura SAMURAI KANTO TOYO TIRES RX-7 were eliminated in qualifying at 26th and 34th respectively. Fujinaka went on to state, “I followed my spotters instructors and dove in real deep for my second run but I messed up in sector 4.” As for Imamura, he commented, “I had some ignition issues but still managed to drift for a while but then my driveshaft broke.” #77 Teruyoshi Iwai’s EXEDY R Magic D1 Racing Roadster advanced into the tsuiso tournament but unfortunately was eliminated in the top 16 when he spun out. Later he related, “I had problem with my DOSS (“D1 original scoring system”) and so was forced to do an extra run (in additional to the regular 2) despite the fact that I was given no chance to change tires. So, obviously I lost grip halfway through and spun out…”

The next round of the D1GP will be held over August 19th to 20th at Ebisu.