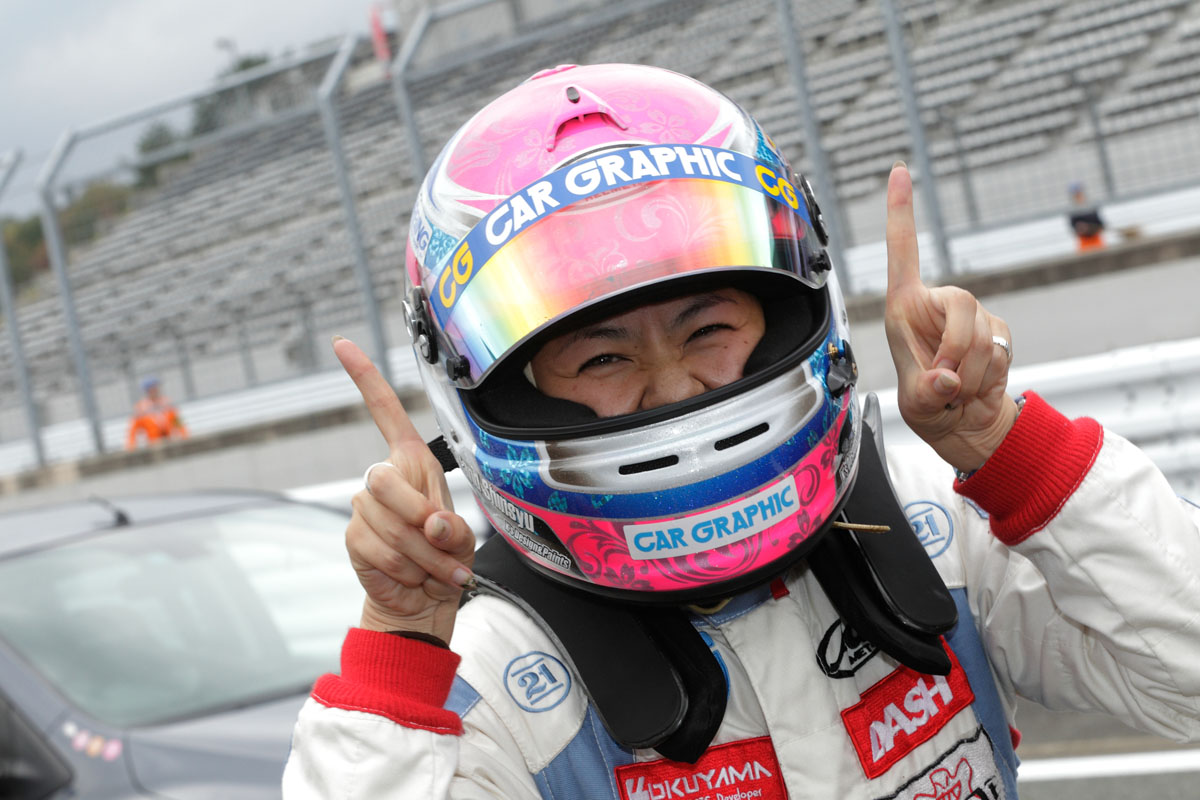 The DO-ENGINEERING Okuyama Demio SKYACTIV-D, part of the MZRacing family, began competing in the Fuji Championship Series this year. Behind the wheel of the Demio SKYACTIV-D was female racer, Aya Machida, who up until this point had placed 3rd, 3rd, and 1st, leaving the MZRacing crew with high hopes for her in the final round. The final round for this year’s series was held on October 31st (Sat) and Machida gave us an account of her momentous effort.

Eastern Japan has had one of its coldest autumns on record this year and on the day of qualifying the air temperature was 9°C at 8:30am. This is very favorable weather for a diesel turbo. Qualifying would be held as a mixed Toyota 86 / NC Roadster session, and all 24 cars headed out onto the track to implement their time attack. Re-writing the course record, #75 Takashi Nishiyama took pole position in the Demio class. #34 Takeshi Tokiwa grabbed 2nd place on the grid and #55 Machida 3rd with a mere 0.9 second difference. After qualifying was over, Machida commented, “Although 2’17”994 is my own personal best, I went out hoping to break the 17 second mark. However, we’re racing with new brake pads and the initial feeling was a little different to what I’m accustomed to. So when I finally managed a clean lap, the braking felt unstable and I wasn’t able to hit the time attack as well as I would have liked.” At this stage in the series the competitors with the possibility of becoming series champion included point leader #34 Tokiwa, followed by #75 Nishiyama at 2nd in the rankings. While either of these two would secure the title if they won this final race, for #55 Machida to become champion, she not only had to finish 1st, but point leader Tokiwa would have to place 3rd or lower.

At 12:20 the final race finally began. At the front of the grid were the 86s, followed by the NC Roadsters and, to the rear, the Demio class. Leaping forward with a starting dash following the green light was Machida in the Demio SKYACTIV-D. At the first corner she was running as class leader. Following behind her was the #75 DE Demios of Nishiyama and #34 Tokiwa and they passed through the control line of the first lap in this order. Throughout the race #75 Nishiyama carried out a fierce pursuit, recording lap times faster than Machida, but the young female driver kept her cool and protected her lead to pass the checkered flag in 1st place. With Nishiyama finishing 2nd and point leader Tokiwa following in 3rd, Machida jumped up to the top of the series rankings and secured the coveted series championship title.

The first words out of Machida’s mouth as she gleefully leapt out of her car were, “I did it! I did it!” Later on she related, “Compared to the DE, this car is about 100kg heavier, I was a little worried about the burden that the tires would have to bear towards the end of the race. For that reason I thought I would try to take advantage of the SKYACTIV-D’s torque advantage and make a starting dash to get into the lead and then maintain that for the remainder of the race. Everything went according to plan and I could not be more thrilled.” Team Principal, Okuyama looked supremely satisfied and reflected, “Nishiyama was looking very dangerous there in 2nd place and there were moments where I thought Machida wouldn’t be able to hold out, but she kept her cool and held out right to the finish line. It was a very well fought race. We had almost given up on getting the championship, so to have taken it today, this has been a fantastic season for us.” Mamoru Tachimoto, from DO ENGINEERING, the company in charge of vehicle development, commented, “The oil temperature became very high during the race, so we had our hands full trying to deal with that. The oil temperature was getting close to 140°C and luckily we were permitted to add some additional equipment to the cooler. Other than that, we have been using the same suspension since the opening round and there has been no need to replace it, which really shows the high base potential of the DJ Demio.”

The final round race report for other classes in the Fuji Championship Series can be found here.
>>> https://mzracing.jp/en/japandomestic/2393

Test by MZRacing Photo by OKUYAMA