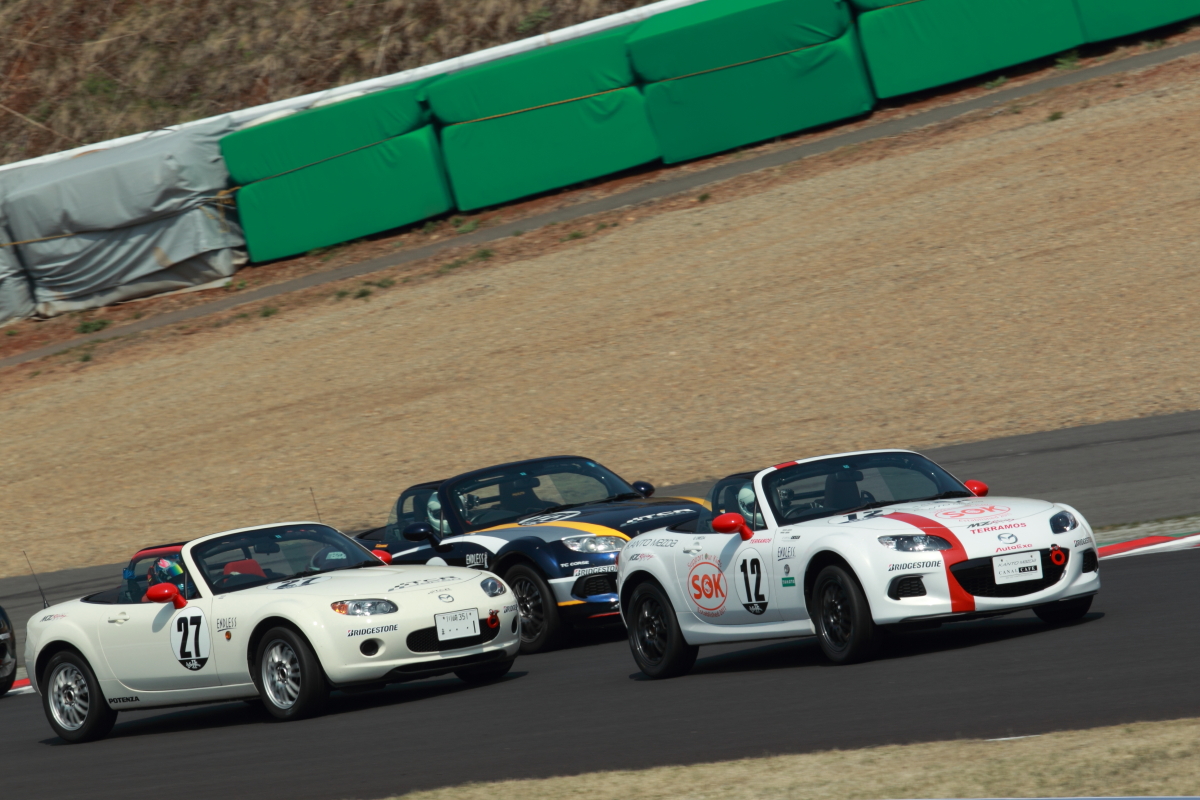 The opening round for the Roadster Party Race II was carried out as part of the Mazda Fan Tohoku Meeting held on April 12th (Sun) at Sports Land SUGO where 18 NB and NC Roadsters competed for first round glory. Gaining particular attention in the race were the two novices Yui Tsutsumi and Tsuyoshi Umeda.

When all the entrants gathered in the pits there were many comments like, “Hey I’m glad you’re out again this year! Let’s both do our best, yeah?” An incredibly friendly atmosphere could be felt within the group.

The 8-lap race started at 1:00pm. Starting from 3rd on the grid, #12 Umeda leapt up to overtake pole sitter #27 Tsutsumi and be running 2nd behind #123 Izumi, who had managed to grapple the lead. After this, Umeda began a braking battle and made his way through #123 Izumi’s inline at the final corner to rise to the front of the pack. At lap 7 #123 Izumi was forced to hit the brakes to avoid a collision with #12 Umeda, who was caught on the outside during a 3-car battle for position. This allowed #27 Tsutsumi to rise up to 2nd and begin a fierce pursuit of #12 Umeda, visibly reducing the almost 1-second margin he had been building up in the lead. By the last section heading towards the last corner of the final lap, he was bumper to bumper with #12 Umeda and waiting for a chance to make his move. Entering into his slip stream then moving up at the final straight, the two were side-by-side, and an edge-of-your-seat battle unfolded for victory. With the entire venue’s eyes glued to the race, #27 Tsutsumi managed to grab the win with a mere 0.04 second margin.

After the race Tsutsumi, also a Formula racer, coolly stated, “I thought that if I could just break through the stalemate of the battle for 2nd I had more than enough chance to take victory. I broke out of the pack at lap 7 to rise to 2nd and decided to make my move at the last lap of the final corner. I carefully watched how Umeda was driving and felt that I was faster in the section heading towards the final corner. I thought if I could enter his slipstream there I had more than enough chance to overtake him.” On the other hand, Umeda also calmly analysed his own performance, saying, “when practicing I felt that I was having trouble finding the right line and clearly this has become a weakness. I know where the problem lies so I just need to work on that.”

Following on from this was the Mazda Fan Endurance (“Maz Tai”) where the #15 Roadster Classic 2000 TUNED of Teruaki Kato, Yui Tsutsumi and Tomoyuki Tsutsumi took away victory, making it a double win for Yui. Following them in 2nd was Team TERRAMOS’ 2000 NORMAL, which carried out a steadfast fuel saving race to take 2nd. This was also a double podium for them following the Party Race. It should be mentioned that this year a new regulation has been introduced which requires that the engine must be shut off for at least 1 minute during pit stops. This further means that to achieve victory, teams really need well thought out strategies, superb driving technique and fuel saving.

Team TERRAMOS’ team principal, Terada said, “Our race went really well, so I think, for a novice driver, it really couldn’t be better. Also, in the “Maz Tai,” I left everything including the race strategy to our young crew, which includes Umeda. So for them to take 2nd is a huge boost to morale. This was a great opportunity for them to learn the steps from strategy formulation to implementing the actual race so I’m really satisfied.”

Tsutsumi, the novice who achieved victory, is a young driver from TCR Ichioshi. This 19 year old is a first year university student who has been karting since he was just 5 and has displayed exceptional talent, achieving amazing results in numerous events. Being recognised as a young man with serious potential, from last year he has been competing in the S-FJ Motegi Champion Series. He is definitely a driver to keep your eye on. It very much seems that this year the Party Race II has a lot of excitement in store for us.