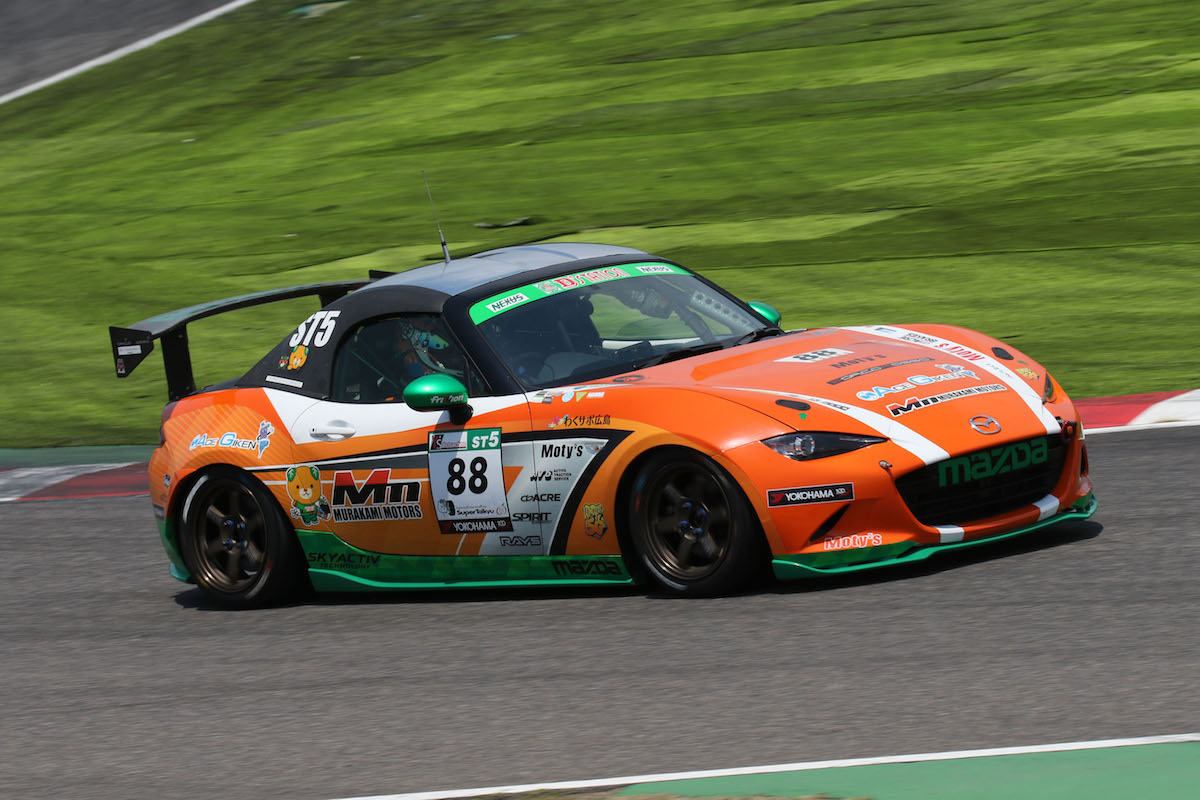 The Round 3 4-hour race of this year’s Super Taikyu series was held over June 10th to 11th at Suzuka Circuit where the #88 Murakami Motors Roadster (Hiroyuki Murakami / Takeshi Wakitani / Masanobu Kato) took class victory. This was their second consecutive lights-to-flag victory following on from the last round at SUGO.

This race’s ST-5 class saw 3 ND Roadsters compete, including Murakami’s, and with the addition of the “odula Demio 15MB” and “NOPRO Demio SKY-D”, a total of 5 Mazda machines took part. Also, with the “TC CORSE Roadster” competing in the ST-3 class and Team NOPRO’s “Axela SKY-D” in the ST-3 class, there was a total of 7 Mazdas running in this race. However, there was an unfortunate occurrence that took place early this race weekend. The highly experienced Team NOPRO, led by the veteran Toshihiko Nogami, incurred some drivetrain issues in their Demio SKY-D during Friday’s practice and despite carrying out repairs were unable to restart the engine. They were unable to locate the source of the electrical trouble, which meant they couldn’t take part in Saturday’s qualifying session, forcing them to retire. On the other hand, the Axela SKY-D that experienced overheating issues at SUGO, underwent a series of modifications to address the problem and despite the weather being hotter during this race, was able to consistently tick off laps without a hitch. However, being yet to pull out the full potential from their engine, they qualified slowest in class and, despite advancing to the 100-minute second chance race on Saturday, the times they achieved weren’t quite enough and they were eliminated. Team representative, Nogami stated, “Our countermeasures for the overheating issue were effective and we were able to run for the full 100 minutes without issue. Although we were eliminated this time, we will be focusing on weight reduction and increasing the car’s power output before the next round. I hope everyone continues to cheer us on.”

This time around all eyes were focused on pole-sitter, the #88 Murakami Roadster. In qualifying, A-driver, Murakami, marked down the fastest time, while B-driver, Wakitani recorded the second fastest. Their combined result secured the #88 pole position for the race. The always modest, Murakami stated, “Here at Suzuka, with its combination of straights and stop-and-go sections, the Fits are particularly strong because of their higher engine power. However, if we take full advantage of the Roadsters excellent handling, we should have a chance. I’m hoping we can carry out a calm, mistake free race and bring home a good result.” Murakami went on to act as starting driver for the race. As expected, the engine power of the Fits proved to be formidable, and Murakami was overtaken by the #700 in the opening lap. From then on he fiercely chased the race leader from 2nd place. After approximately 1 hour had passed in the race, an accident occurred on the course. This saw the safety car (SC) dispatched as the car was removed from the circuit. The Murakami Roadster took this timing to head into the pits to refuel. They successfully managed to pit out without losing position and were even able to retake the lead. From then on, Wakitani drove throughout the second stint and consistently recorded stable lap times while avoiding getting embroiled in the accidents that occurred around him. He then handed the car over to Kato, still in the lead. Despite the final stages of the race seeing numerous instances, such as cars going off course and crashing, Kato remained steady. Kato went on to say, “There was quite a lot of debris on the course so I had to be careful. The Eastern part of the course was relatively clear though, so I was able to make the most of the Roadster’s handling and reduce our times.” Due to a concern regarding the amount of remaining fuel, he quickly pitted to top up the tank before going back out onto the track to protect their lead and pass the checkered flag of the 4-hour race.

Standing in the center of the podium, Murakami related, “We were able to pit in and refuel during the SC run and this put us into a good position for the rest of the race. Also, the drivers carried out mistake-free drives and the pit crew did impeccable work. The precise fuel calculations from our mechanics played a particularly large part. I’m really happy to finally grab a win at Suzuka. This will give the team a lot of confidence.”