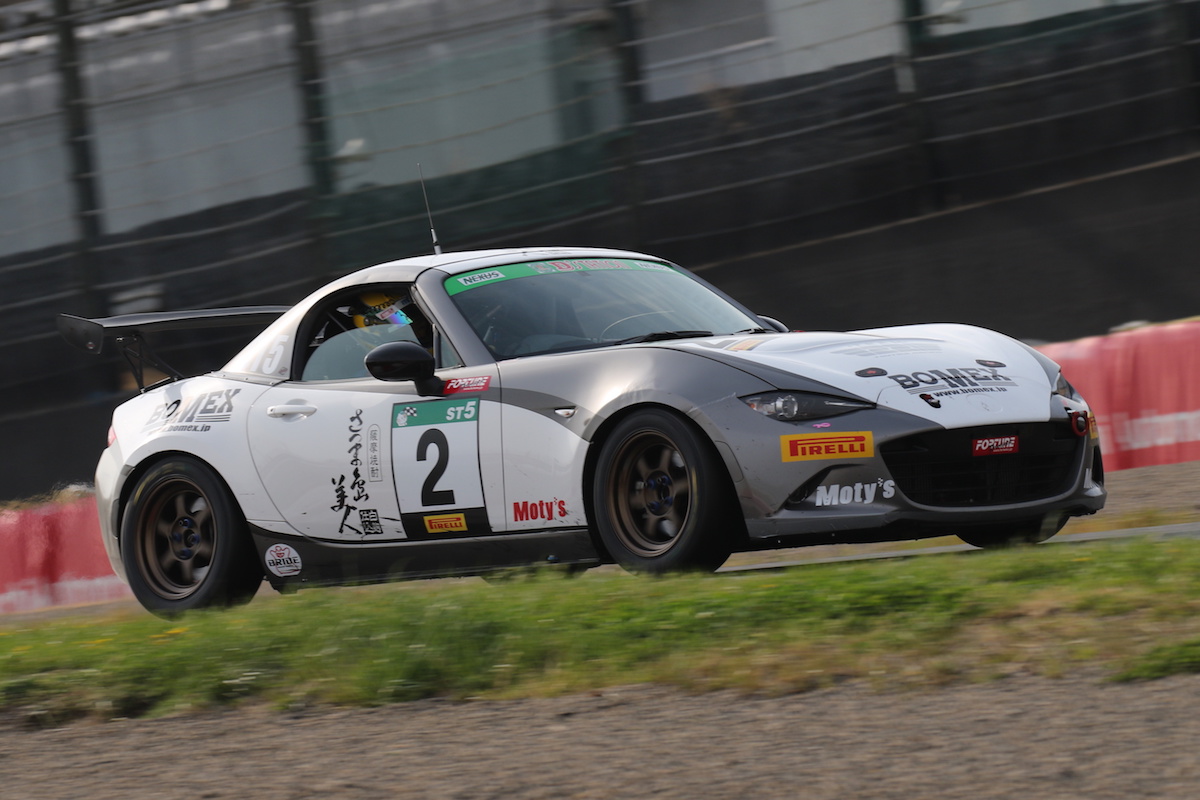 A total of 52 machines from 7 categories gathered at Suzuka Circuit, which was surrounded in cherry blossoms in full bloom, and this made for a lively opening round to the S-Tai series. This year Italian tire maker, Pirelli became the series tire supplier, meaning all competing vehicles would be using them. With such a large number of competing cars, a full course yellow (FCY) flag system was introduced to ensure safety. If any trouble occurred on the track, a FCY will be announced and all cars running on the course will be forced to drive under 50km/h and overtaking will be prohibited. The ST-TCR class, which was introduced last year, saw 7 vehicles compete, while the FIA GT3 class increased to 9 machines increasing the international standardization even further. A total of eight Mazda machines are competing with four ND Roadsters and two Demios (including one diesel) competing in the ST-5 class for cars of up to 1.5 liters displacement, one NC Roadster in the ST-5 CLASS (1.5-2.0 liters) and one Axela Diesel in the ST-2 class.

20 enthusiastic fans turned out for the pit tour for the Mazda team cheer squad that has been held since last year. The group that gathered in the morning of April 1st visited the Mazda team pits and chatted with the team drivers, representatives and so on about their ambitions and aspirations. As they were able to ask questions, take photos and get autographs they immediately felt a kinship with the teams. Mr. Hosokawa who came out from Shiga Prefecture, stated, “I’ve been interested in taking part for a while now. Car’s very similar to the one I drive compete in the S-Tai so I think that’s really interesting. I drive a Demio so obviously I’ll be cheering on the Demios. I think it’s really good that we have to chance to meet the drivers like this.” Mr. Nomura (Mie Prefecture), who brought his son along related, “It was a really great experience being able to go into the pits and talk to the drivers. They also let my son sit in the driver’s seat.”

The race began as a rolling start from 12:15pm. The #17 Axela Diesel competing in the ST-2 class began from the tail end of the top group, with the #54 TC CORSE Roadster that qualified 3rd in the fiercely competed ST-4 class, following behind in the second group. After them the ST-5 class followed, packed with six Mazda machines. In the opening stages the two leading vehicles in the ST-4 class (Toyota 86s) ticked off laps at a furious pace, while the #54 Roadster managed to keep on their tails with Tsutsumi implementing a tenacious performance. Second driver, Kato and young gun, Hiraki, who joined the team this season, maintained the rhythm set by Tsutsumi and after the 5 hours had passed they passed the checkered flag in 3rd place. Team representative, A-driver Kato went on to say, “I’m actually not all that confident at Suzuka so for us to be able to finish in 3rd is a really great start to the season. Our two young drivers did a fantastic job. Newcomer, Hiraki passed the checkered flag without mistake. At only 21 he has already driven in formula racing and the SUPER GT so we can really depend on him.

In the ST-5 class two Honda Fits began from the front row but were fiercely pursued by Otsuka in the #2 Roadster, who jumped into the lead early on. He then handed the wheel over to team representative, Tsutsui who continued without trouble or contact with any other competitor and maintained the lead until the finish line. This was the first victory for a team driving a Roadster. Tsutsui went on to say, “We struggled to match the car’s settings to the tires [that were introduced in this season] during the pre-season tests, so I had no idea how the race was going to turn out for us. However, everyone in the team really gave it everything and that led to this result. It was a really great race.” His teammate, Yamashita stated, “It’s a new team but we were able to use the experience of our drivers and get this win. Still, there is still I can work on in terms of pulling out the full pace of the car so I will be working throughout the season to perfect my driving.”

As for the #17 NOPRO Axela Diesel (Tatsuya Tanikawa / Tatsuya Nogami / Toshihiko Nogami), they had a technical issue involving a lack of turbo pressure in the second half of the race. However they were able to repair the issue and finish in 4th in the ST-2 class. The #37 Demio Diesel (Tomo Seki / Kaoru Ijiri / Hiyu Ota /) placed 4th in the ST-5 class, and the #50 LOVE DRIVE RACING Roadster (Marie Iwaoka / Anna Inotsume / Hiroko Komatsu / Yumiko Sekizaki) placed 6th. The #32 Nissoku Roadster (Akihiro Harashima / Junko Takahashi / Meidai Matsuda) placed 7th but the #66 Odula Demio 15MB, which apparently “miscalculated fuel needs” ran out of gas with 8 minutes remaining in the race.

Text and photos by MZRacing