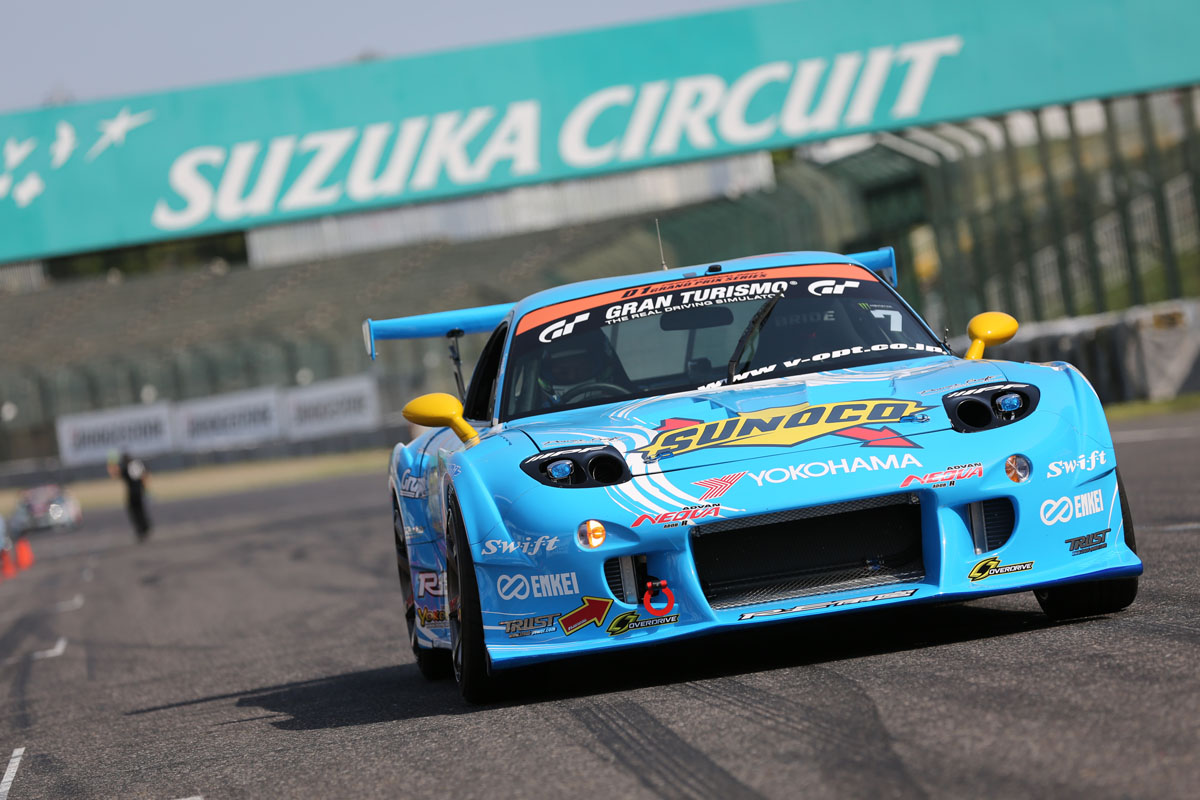 Round 2 of the D1GP was held at Suzuka Circuit over May 24th-25th. This round all eyes were on the 3 rotor turbo powered #7 RX-7 from Team RE Amemiya SUNOCO.

A total of 4 RX-7s competed in this tournament but unfortunately the #59, Junji Yamamoto and #88, Manabu Fujinaka were eliminated in the qualifying runs. Having got his hands on serious horsepower, Masao Suenaga showed fine form during the practice runs in the #7 and eased through the qualifiers without a hitch. Yukio Matsui also passed through in his #77.

In the tanso (solo run) finals, Suenaga managed to take 6th in the #7 to achieve automatic tuisou (chasing race) qualification. Matsui damaged his machine entering the course and was unable to continue running which meant he was forced to begin the next day’s tsuisou race from the qualification runs.

Matsui defeated Tsuyoshi Tezuka to advance into the Best 16 but when he was battling the #25 AE86 driven by Manabu Orido he, “got a little greedy going into the corner and [thought he] could push just that little bit further, but unfortunately pushed it too hard.” This resulted in an over-run which saw him eliminated from the competition.

On the other hand, Suenaga, utilizing his vehicle’s phenomenal acceleration, showed absolute control over his machine and defeated his opponents one after another to advance to the final. However, in the end he was slightly too aggressive against opponent, Takayama Kenji and made contact with the #5 which disrupted his line and caused him to veer off track. He finished in 2nd place. Even still he went on to say, “if the people who came out to watch were able to see that we have produced an awesome machine, then I think we’re off to a good start.” I think we will see him truly let loose in the following events. RE Amemiya Racing representative, Isami Amemiya stated, “we have changed our car this year and developed a new RX-7. We also changed our sponsor so we moved over to the beloved 7. The engine packs a mammoth 20B turbo so please keep a look out.”

Photo by RE Amemiya Racing