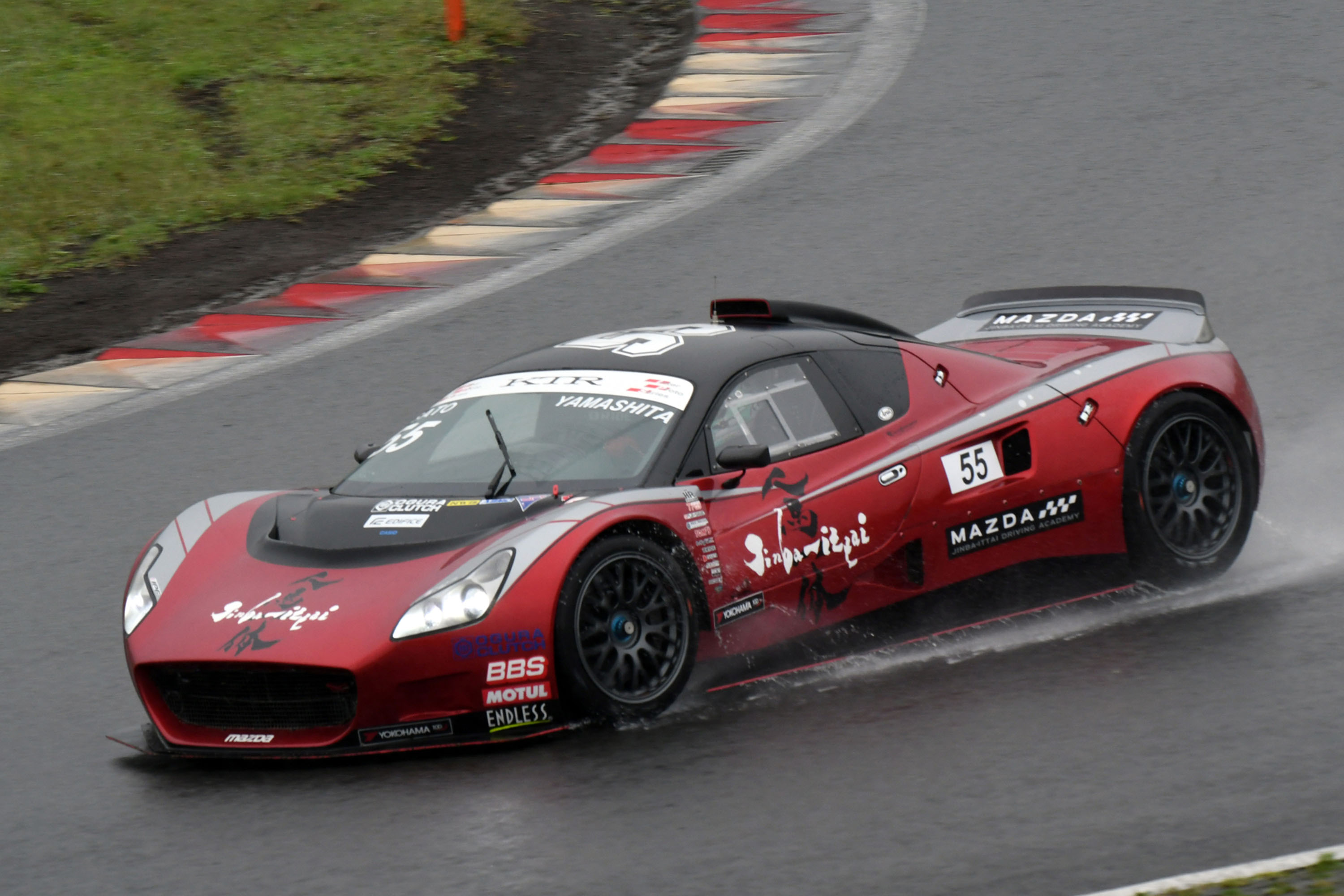 Round 2 of the 2017 Inter Proto Series (IPS) was held over September 16th – 17th after an interval of 4 months where the rising star of Team “Jinba Ittai” (unity of rider and horse), Kenta Yamashita took a dramatic victory.

Following on from last year, Mazda’s highest ranked internal test driver, Masahiro Sato was entered into the Gentleman’s Class of the IPS behind the wheel of the #55 “Jinba Ittai Driving Academy & KTR”. His partner this year was the aforementioned young driver, Kenta Yamashita, who aims to become a professional driver and has been active in the SUPER GT and Super Formula series.

Unfortunately, this weekend at Fuji Speedway was met with rainy conditions due to the effects of typhoon 18, which landed on the Japanese archipelago as many as four times. The road surface was wet throughout the entire weekend. In official qualifying that was held from the morning of the 16th, the Gentleman’s Class Sato ticked off a number of solid laps and eventually marked down a second fastest 2 minutes 03.702 second time. In the subsequent Pro Class qualifying session, the rain weakened a little and the top teams began recording 1 minute times. Yamashita carved out a 1 minute, 58.476 second time but his attack lap timing was a little off and he grabbed a less than hoped for 5th placed start position.

On Saturday the 16th the race 3 of the Gentleman’s class was held from 1:30pm. Although it was stipulated that the race would be either 15 laps or within 35 minutes, the wet conditions saw the race begin behind the lead of the safety car (SC), which continued for 4 laps. When the signal finally turned green, the #55 lacked acceleration going into the first corner. It was rapidly overtaken by the #32, which dashed out of a 4th placed grid position and then was passed by another car in the opening lap seeing it enter into the lap 2 in 2nd place. Excluding the car running in the lead, all other cars had their visual field obstructed by water spray and at the entry to corner 1, Sato thought he saw the brake lights of the car in front suddenly flash. Without thinking he slammed on the brake pedal and sent the car into a spin. He flew into the run off area of corner 1 in reverse and eventually came to a stop. Restarting the car took a bit of effort and Sato fell far down the order. After completing the stipulated 15 laps he had fought back to overall 7th place but within the Expert Division of the Gentleman’s Class, which was for advanced drivers, he finished at a disappointing bottom ranked 6th place.

On the following day, the 17th, the weather conditions stayed the same, and race 4 of the Gentleman’s Class began at 9:09 am, as expected, behind the SC. This time around the race was designated to be either 10 laps or 25 minutes. Sato begun from 7th place on the grid, where he finished in the previous day’s race. After 3 laps the SC went back into pit lane and it became a 7-lap race. On this day Sato displayed a steady run. He overtook one car on the opening lap and then passed the race leader when he spun out to move up to 5th place. From then on he pursued his rival in 4th and reduced the gap down to 0.186 seconds before receiving the checkered flag.

Race 3 for the Pro Class was held from 1:30pm and would be a sprint race of 8 laps or 15 minutes. Yamashita began from his 5th placed qualification and finished in 3rd. Immediately after that he went on to develop a strategy aiming for victory in the 10 lap / 20-minute race 4. That being said, this is a class that consists of top drivers from all over Japan and so achieving that would be easier said than done. Still, he grabbed third in race 3 and headed into race 4 with considerable momentum. Both races for the Pro Class began as rolling starts and as soon as the green signal was lit at 1:49 pm Yamashita could be seen pushing through the gap between pole sitter, #19 “Yuhi Sekiguchi” and #3 Hiroaki Ishiura, who began from 2nd place on the grid. The #19 attempted to fill in the gap from the outside but the soul red #55 accelerated rapidly on the inside and leapt into the lead.

With the rain pouring down, even the pro drivers were struggling with the lack of visibility, but running in the lead left the #55 the only car not bothered by the back spray of his rivals, meaning the situation was exceedingly in his favour. On top of that, the #19 and #17 (Sho Tsuboi) were engaged in a back and forth battle, which left them both unable to lift their place to challenge the #55. After 3 laps, Yamashita had built up a 5.7 second lead and in the middle stages of the race he maintained his more than adequate advantage to stay in the lead until the finish line. Yamashita went on to say, “I’m really happy to have been able to achieve the first win for this team. After I moved into the lead I was able to run ahead with quite a lot of leeway. I will do everything in my power to ensure that Sato will also stand in the same spot on the podium in the next two races.” As for Sato, he said, “It’s a bit disappointing. Still, I was moved by how much I learned from Yamashita today. Including improving my starts, I want to shift things into a higher gear and aim for a better result in the next races.”

The Inter Proto Series 2017 is being held exclusively at Fuji Speedway and consists of 4 rounds. The next race will be races 5 and 6 (round 3) and will be held from the 28th to the 29th of October.

Photo and Text by T. Ishida +1