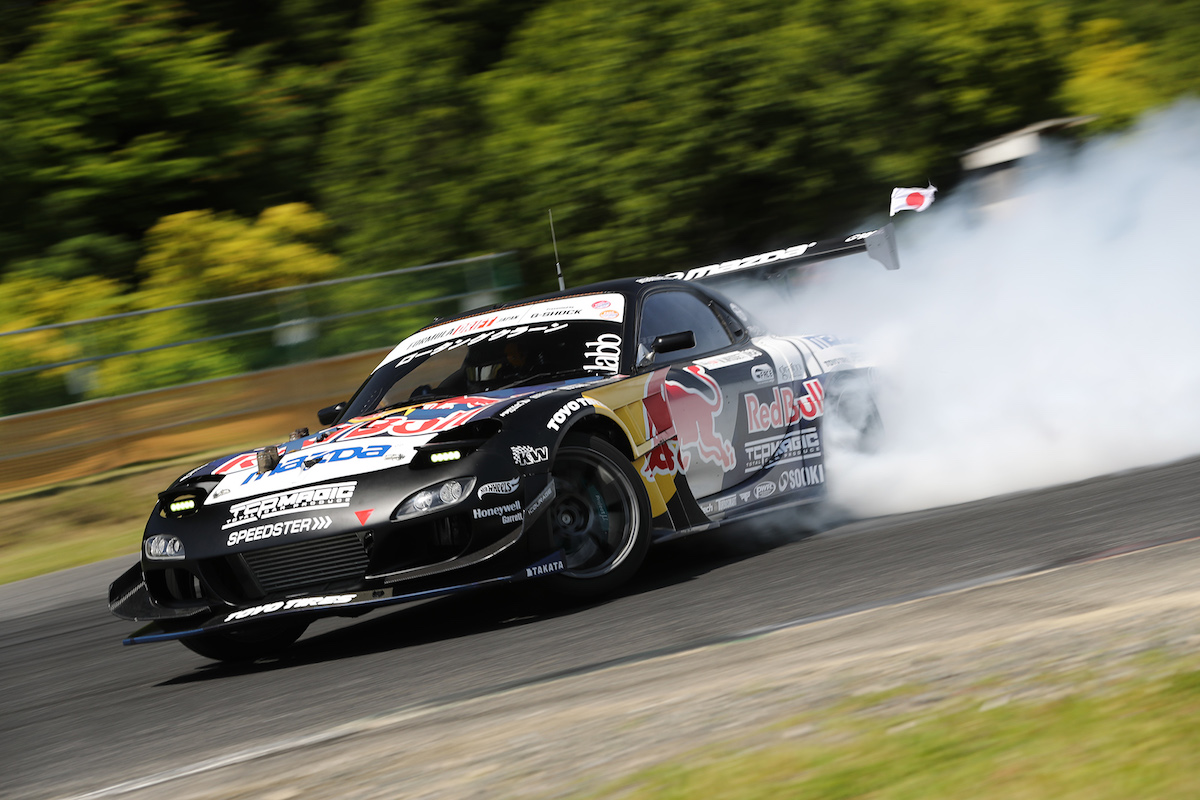 Team Magic with Red Bull driver, “Mad Mike” Whiddett, competed in round 1 of the Formula Drift Japan held over May 26-27 at Suzuka Circuit, Mie Prefecture where he began the season with an opening round victory.

As with last year, Mad Mike is competing in all five round of this year’s Formula D Japan behind the wheel of an FD RX-7. Displaying almost perfect performances in the previous days practice sessions, there were whispers that Mike would most likely be sitting at the head of the fight for this round’s top spot. In the tanso qualifying held on the 26th, he was the 32nd to run out of the 35 competitors. Perhaps because the grip at the exit of the corners had shifted further to the outside than the previous year, many drivers struggled with their strategies. Until Mad Mike’s run, the highest score was attained by the young driver of the PS13 Silvia, Kanta Yanagikuita, who came away with 85 points. In his first run, Mad Mike pulled out a tremendous, dynamic run, right from entry and powered on right until the finish line. This performance far outdid the runs of previous drivers and gained him 92 points. However, in the next run, Koichi Yamashita pulled out a hair’s edge run that brought him right up to the out-line and scored 1 point higher than Make to take the top spot. In the second session Kanta Yanagikuita managed to increase his score. Marking down a 93 points, equal to that of Koichi Yamashita, the two moved into equal 1st. Although Mad Mike’s second run was solid, compared to his first run, there were a few stumbles and he was only able to attain 76 points. With this Kanta Yanagikuita qualified 1st, Kota Yamashita 2nd and Mad Mike 3rd.

The final tournament was held on the 27th as a 1-on-1 tuiso competition. Mad Mike was able to compete in all his rounds without any causes for concern. In the top 32 he went up agains the R32 Skyline of Go Kamiya. When Mike took the first leading run, the chasing Kamiya blew his differential and went off course. This forced him to retire and moved Mike into the top 16 without a fuss. In the top 16 he went up against Singaporean driver, Ng Sheng Nian. In the first run Mad Mike displayed an amazing performance. The crowd was on the feat at the end of his perfect lead run. During his chase run, Nian also pulled out a passionate run but in the end Mike came out on top.

In the top 8 he went head to head with Andrew Gray, with whom he had engaged in several exciting battles with in the last season. The tsuiso battle between this two once again became one for the books. Mike to the lead for the first run and pulled out a powerful drift that cleanly ran along the same line as his qualifying runs, while Andrew Gray was not to be undone and the two were panel-to-panel. When they changed places for the second run, Mad Mike took up the chase and engaged in a spirited drift that had him a hair’s breadth off the side of his rival and managed to secure victory.

In the top 4 he came up against Koichi Yamashita, who had finished at 2nd in qualifying. In the first run, Mike took the chase and showed a stunning run that had him glued to his opponent to grab essential points. In the second run he displayed a performance that did not break with his aggressive style and saw him achieve an overwhelming victory. From there he headed into the final. Here his opponent was Shinji Minowa, who finished last year’s season at 2nd in the rankings. In the first run, Mad Mike took the lead and once again implemented a brilliant, error-free run. Shinji Minowas also stayed right on his side panels, pushing right up to the outline. I the second run, Mad Mike displayed a tremendous chase to take a spectacular first round victory.

Team Principal, Kawato stated, “Last year was a data acquisition year but we were still able to end the series in 5th. This year our goal is to compete while taking advantage of the data we gathered last year. We wanted to finish the opening round at 3rd at the lowest so this result is even better than we expected. This year we changed tires to the TOYO PROXES R888R, slightly reviewed the undercarriage, further improved the cooling system and these efforts have allowed us to pull out 1000hp on this car. That’s massive.” An ecstatic Mike went on to say, “The car was perfect, and I was able to drive with confidence right from practice without having to make any changes. Seriously perfect!” This time the drivers who finished below the top 16 included drivers who finished 1st-6th in last year’s series rankings (Masashi Yokoi didn’t compete) and so the top ranking finishers this time around completely upended the order.  This was a major first step towards taking the series championship. Keep an eye out for Mike in the next rounds.